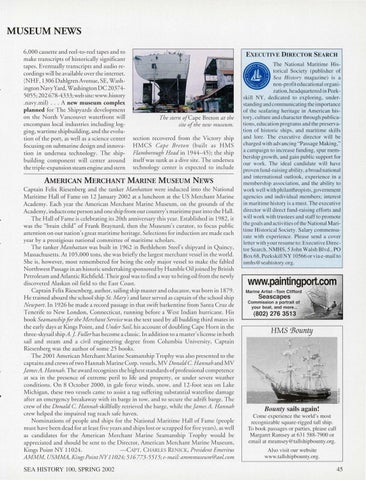 The stern o/Cape Breton at the site ofthe new museum. section recovered from the Victory ship HM CS Cape Breton (built as HMS Flamborough H ead in 1944-45); the ship itself was sunk as a dive site. The undersea technology center is expected to include

AMERICAN MERCHANT MARINE MUSEUM NEWS Captai n Felix Riesenberg and the tanker Manhattan were inducted into the National Maritime Hall of Fame on 12 Jan uary 2002 at a luncheo n at the US Merchant Marine Academy. Each year the American Merchant Marine Museum, on the gro unds of the Academy, inducts one person and one ship from our co untry&#39;s maritime past into rhe Hall. The H all of Fame is celebrating its 20th annive rsary this year. Established in 1982, it was the &quot;brain child&quot; of Frank Braynard, then the Museum &#39;s curator, to focus publi c attention o n our nation &#39;s great maritime heritage. Selections for induction are made each year by a prestigious national committee of maritime scholars. The ranker Manhattan was built in 1962 in Bethlehem Steel&#39;s shipyard in Quincy, Massachusetts. Ar 105,000 tons, she was briefly the largest merchant vessel in rhe wo rld. She is, however, most remembered for being the only major vessel to make the fab led Northwest Passage in an histo ric undertaking sponsored by Humble Oil joined by British Petroleum and Atlantic Richfield. Their goal was to find a way to bring oil from the newly discovered Alaskan oil fie ld to the East Coast. Captain Felix Riesenberg, author, sailin g ship master and educator, was born in 1879. H e trained aboard the school ship St. Mary &#39;s and later served as cap rain of the school ship Newport. In 1926 he made a record passage in that swift barkentin e from Santa C ruz de Tenerife to New London, Connecticut, running before a West Indian hurricane. His book Seamanship for the M erchant Service was the text used by all budding third mates in the early days at Kings Point, and Under Sail, his acco unt of doubling Cape Horn in the three-skysail ship A. J Fuller has become a classic. In addition to a master&#39;s license in both sail and steam and a civil engineering degree from Columbia U ni versity, Captain Riesenberg was the author of some 25 books. The 2001 American Merchant Marine Seamanship Trophy was also presented to the captains and crews of two H annah Marine Corp . vessels, MV Donald C. Hannah and MV James A. H annah. The award recognizes the highes t standards of profess ional competence at sea in the presence of extrem e peril to life and property, or under severe weather conditions. On 8 October 2000, in gale force winds, snow, and 12-foot seas on Lake Michigan, these two vessels came to assist a tug suffering substantial waterline dam age after an emergency breakaway with its barge in tow, and to secure the adrift barge. T he crew of th e Donald C. Ha nnah skillfully retrieved th e barge, whil e the James A. Hannah crew helped the impaired rug reach safe haven. Nominations of people and ships for the National Maritime Hall of Fame (people must have been dead for at least fi ve years and ships lost or scrapped for fi ve years), as well as candidates for the American Me rchant Marine Seamanship Trophy wo uld be appreciated and should be sent to the Director, American Merchant Marine M useum, Kings Po int NY 11024. -CAPT. CHARLES RENI CK, President Emeritus AMMM, USMMA, Kings Point NY 11024; 516 773-5 515; e-mail: ammmuseum@aol. com

Commission a portrait of your boat, and more ...