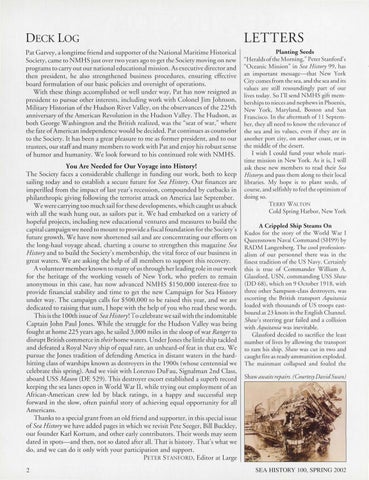 DECK LOG Pat Garvey, a longtime friend and supporter of the National Maritime Historical Society, came to NMHS just over two years ago to get the Society m oving on new programs to carry out our national educational mission. As executive directo r and then president, he also strengthened business procedures, ens uring effective board formulation of our basic policies and oversight of operations. With these things accomplished or well under way, Par has now resigned as pres ident to pursue other interests, including work with Colo nel Jim Johnson, Military Historian of the Hudso n River Valley, on the observances of the 225 th anniversary of the American Revolution in the Hudson Valley. T he Hudson, as both George Washington and the British realized, was the &quot;sear of war,&quot; where rh e fate of American independence would be decided. Par conti nues as co unselor to rhe Society. Ir has been a great pleasure to me as former president, and to our trustees, our staff and many m embers to work with Pat and enj oy his robust sense of humor and humanity. We look forward to his continued role with NMHS.

You Are Needed for Our Voyage into History! The Society faces a considerable challenge in funding o ur work, both to keep sailing today and to establish a secure future for Sea History. Our finances are imperilled from the impact of last year&#39;s recession, compounded by cutbacks in philanthropic giving following the terrorist arrack on America last September. We were carrying too much sail fo r these developments, which caught us aback with all the wash hung our, as sailors put it. We had embarked on a variety of h opeful projects, including new educational ventures and m easures to build rhe capi ral campaign we need to mount to provide a fiscal foundatio n for the Society&#39;s future growth. We have now shortened sail and are concentrating o ur efforts on the lo ng-haul voyage ahead, charring a course to strengthen this magazine Sea History and to build the Society&#39;s m embership, the viral force of our business in great waters. We are asking the help of all m embers to support this recovery. A volunteer member known to m any of us through her leading role in our work for the heritage of the working vessels of New York, wh o prefers to remain ano nymo us in this case, has now advanced NMH S $ 150,000 interest-free to provide financial stability and rime to get the new Campaign for Sea History under way. T he campaign calls for $500,000 to be raised this year, and we are dedicated to raising that sum, I hope with the help of you who read th ese words. T his is the 1OOth issue of Sea History !To celebrate we sail with the indomitable Captain John Paul Jones. While the struggle for the Hudson Valley was being fought at home 225 years ago, he sailed 3,000 miles in the sloop of war Ranger to disrupt British commerce in their home waters. Under Jones the little ship tackled and defeated a Royal Navy ship of equal rare, an unheard-of feat in that era. We pursue the Jones tradition of defending America in distant waters in the hardhirrin g class of warships known as destroyers in the 1900s (whose ce ntennial we celebrate this spring). And we visit with Lorenzo DuFau, Signalman 2nd C lass, aboard USS M ason (DE 529). This destroyer esco rt established a superb record keeping the sea lanes open in World War II, while trying our employm ent of an African-American crew led by black ratings, in a happy an d successful step forward in the slow, often painful story of achieving equal opportunity for all Americans. T hanks to a special grant from an old friend and supporter, in this special issue of Sea History we have added pages in which we revisit Pere Seeger, Bill Buckley, our founder Karl Kortum, and o ther early contributors. T heir words m ay seem dared in spots-and then, no r so dared after all. Thar is histo1y. Thar&#39;s what we do, and we can do it only with your participation and support. PETER STANFORD, Editor at Large 2

LETTERS Planting Seeds &quot;H eralds of rh e Morning,&quot; Perer Stanford&#39;s &quot;Oceani c M ission&quot; in Sea History 99, has an important message-that New York C ity comes from the sea, and the sea and its values are still resoundingly part of our lives today. So I&#39;ll send NMHS gift memberships to nieces and nephews in Phoenix, New York, Maryland, Boston and San Francisco. In the afte rmath of 11 September, they all need to know rhe relevance of th e sea and irs values, even if rhey are in another port city, on another coast, or in the middle of th e desert. I wis h I could fund your whole maritime mission in New York. As it is, I will ask these new members to read their Sea Historys and pass them along to their local libraries. My hope is to planr seeds, of course, and selfis hl y to feel the optimi sm of doing so. TERRY WALTON

A Crippled Ship Steams On Kudos for rh e sto ry of the World War I Q ueenstown Naval Co mm and (SH99) by RADM Langen berg. The cool profess ionalism of our personnel there was in the finest rradirion of rhe US Navy. Certainly this is uue of Commander W illiam A. G lassford, USN, co mmanding USS Shaw (DD 68), whi ch on 9 October 1918, wirh three ocher Sampso n-class destroyers, was esco rting the British transport Aquitania loaded with thousands of US troops eas tbound at 23 knots in the E nglish Channel. Shaw&#39;s steering gear fa iled and a collision wirh Aquitania was inevitable. G lassford decided to sacrifice rhe least number of lives by all owin g the transport to ram his ship . Shaw was cut in two and caugh t fire as ready ammunition exploded. T he mainmast co llapsed and fou led the