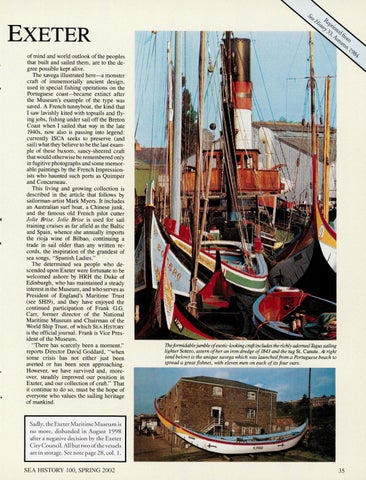 EXETER of mind and world outlook of the peoples that built and sailed them , are to the degree possible kept alive. The xavega illustrated here-a monster craft of immemorially ancient design , used in special fishing operations on the Portuguese coast-became extinct after the Museum&#39;s example of the type was saved . A French tunnyboat, the kind that I saw lavishly kited with topsails and flying jobs, fishing under sail off the Breton Coast when I sailed that way in the late 1940s, now also is passing into legend: currently ISCA seeks to preserve (and sail) what they believe to be the last example of these buxom , saucy-sheered craft that would otherwise be remembered only in fugitive photographs and some memorable paintings by the French Impressionists who haunted such ports as Quimper and Concarneau . This living and growing collection is described in the article that follows by sailorman-artist Mark Myers. It includes an Australian surf boat, a Chinese junk, and the famous old French pilot cutter Jolie Brise. Jolie Brise is used for sail training cruises as far afield as the Baltic and Spain, whence she annually imports the rioja wine of Bilbao, continuing a trade in sail older than any written records, the inspiration of the grandest of sea songs, &quot;Spanish Ladies.&quot; The determined sea people who descended upon Exeter were fortunate to be welcomed ashore by HRH the Duke of Edinburgh, who has maintained a steady interest in the Museum , and who serves as President of England&#39;s Maritime Trust (see SH19) , and they have enjoyed the continued participation of Frank G.G. Carr, former director of the National Maritime Museum and Chairman of the World Ship Trust, of which SEA HISTORY is the official journal. Frank is Vice President of the Museum. &quot;There has scarcely been a moment,&quot; reports Director David Goddard , &quot; when some crisis has not either just been averted or has been seen approaching. However, we have survived and, moreover, steadily improved our position in Exeter, and our collection of craft.&quot; That it continue to do so, must be the hope of everyone who values the sailing heritage of mankind .

The formidable jumble ofexotic-looking craft includes the richly ad&lt;Jmed Tagus sailing lighter Sotero, astern ofher an iron dredge of 1843 and the tug St. Canute. At right (and below) is the unique .xavega which was launched from a Portuguese beach to spread a great fishnet , with eleven men on each of its four oars.

Sadly, the Exeter M aritime Museum is no more, disbanded in August 1998 after a negative decision by the Exeter City Council. All but two of the vessels are in storage. See note page 28, col. 1.