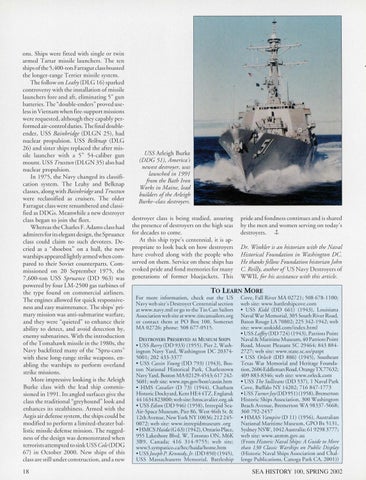 ons. Ships we re fitted with sin gle or twin armed T artar missile launchers. The ten ships ofthe 5,400-ton Farragut class boasted the longer-range T errier missile system . The fo llow on Leahy (DLG 16) sparked co ntroversy with the installation of missile lau nchers fore and aft, eliminating 5" gun batteries. The " double-enders" proved useless in Vietnam when fire-support missions we re requested , al though they capably performed air-control duties. The final doubleender, USS Bainbridge (DLGN 25) , had nuclear propulsion. USS Belknap (DLG 26) and sister ships replaced the after missile laun cher with a 5" 54-caliber gun mount. USS Truxtun (DLGN 35) also had nuclear propul sion . In 1975, th e Navy changed its classification sys tem . The Leahy and Belknap classes, along with Bainbridge and Truxtun were reclass ified as cruisers. The older Farragut class were renumbered and classifi ed as DD Gs. Mea nwhile a new destroyer class began to join the fleet. Whereas the C harl es F. Adams class had admirers for its elegant design, the Spruance class could claim no such devotees. Decried as a "shoebox" on a hull, the new warships appeared lightly armed when compared to their Soviet co unterparts. Commissioned on 20 September 1975 , the 7,600-ton USS Sp ruance (DD 963) was powered by four LM-2500 gas turbines of the type found on commercial airliners. The engines allowed for quick responsiveness and easy maintenance. The ships' primary mission was anti-submarine warfare, and they were "quieted" to enhance their ability to detect, and avo id detection by, enemy submarines. W ith the introd uction of the Tomahawk mi ss ile in the 1980s, the Navy backfitted many of the "S pru-cans" with these long-range strike weapons, enabling the warships to perform overland strike miss ion s. More impressive looking is the Arleigh Burke class with the lead ship commi ssioned in 199 1. Its angled surfaces give the class the traditional "greyhound" look and enhances its stealthin ess. Armed with the Aegis air defense system , the ships could be modified to perform a limited-theater ballistic missi le defense miss ion. The ruggedness of the design was demonstrated when terrorists attempted to sink USS Cole (DDG 67) in October 2000. New ships of this class are still under construction, and a new

USS Arleigh Burke (DDG 51), America's newest destroyer, was launched in 1991 from the Bath Iron Works in Maine, lead builders ofthe Arleigh Burke-class destroyers. destroyer class is being studied , ass uring the presence of destroyers on the high seas for decades to come. At this ship type's centennial, it is appropriate to look back on how destroyers have evolved along with the people who served on them. Service on these ships has evoked pride and fond memories for many generations of fo rmer bluejackets. T his

pride and fondness co ntinues and is shared by the men and women serving on today's destroyers. -1

Dr. Winkler is an historian with the Naval Historical Foundation in Washington DC He thanks fellow Foundation historian john C. Reilly, author of US Navy Destroye rs of WWII, for his assistance with this article.