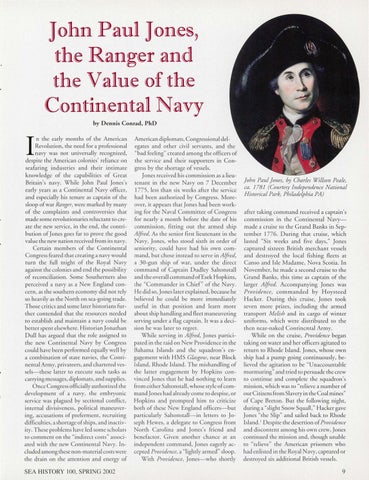 John Pau[ Jones~ the Ranger and the Value of the Continenta[ Navy by Dennis Conrad, PhD n the earl y months of the American Revolution , the need for a professional navy was not universally recognized, despite the American colonies&#39; reliance o n seafa rin g industries and their intimate knowledge of the capabilities of G reat Britai n&#39;s navy. While John Paul Jones&#39;s earl y years as a Continental Navy officer, and especially his tenure as captain of the sloop of war Ranger, were marked by many of the complaints and controve rsies that made so me revolutionaries reluctant to create the new service, in the end, the co ntribution of Jones goes far to prove the good value the new nation received from its navy. Certain members of the Co ntin ental Congress feared that creating a navy wou ld turn the full might of the Royal Navy against the colonies and end the possibili ty of reconciliation. Some Southerners also perceived a navy as a New England concern , as th e southern economy did not rely so heavily as the North on sea-go ing trade. Those critics and some later historians further contended that the reso urces needed to es tablish and maintain a navy could be better spent elsewhere. Historian Jonat han Dull has argued that the role ass igned to the new Contin ental Navy by Congress could have been performed equally well by a combination of state navies, the Continental Army, privateers, and chartered vessels-th ese larrer to execute such tasks as carrying messages, diplomats, and suppli es. Once Co ngress officially authorized the development of a navy, the embryo nic service was plagued by sectional conflict, internal divisiveness, political maneuvering, acc usations of preferment, recruiting difficulties, a shortage of ships, and inactivity. T hese problems have led some scholars to comment on the &quot;indirect costs&quot; associated with the new Continental Navy. Included am ong these non-material costs were the drain on the attention and energy of

American diplom ats, Congressional delegates and other civil servants, and the &quot;bad feeling&quot; created among th e officers of the service and their supporters in Congress by the shortage of vessels. Jones received his commiss ion as a lieutenant in the new Navy on 7 December 1775, less than six weeks after the service had been authorized by Congress. Moreover, it appears that Jo nes had been working for the Naval Comm ittee of Co ngress for nearly a month before the date of his commission, fittin g out the armed ship Alfted. As the senior first lieutenant in the Navy, Jones, who srood sixth in order of seniority, co uld have had his own command, but chose instead ro serve in Alfted, a 30-gun ship of war, under the direct command of Captain Dudley Saltonstall and the overall command ofEsek Hopkins, the &quot;Commander in C hief&quot; of the Navy. He did so, Jones late r explain ed, because he believed he could be more immediately useful in that position and learn more about ship handling and fleet maneuvering serving under a flag captain. Ir was a decision he was later to regrer. While serving in Alfted, Jo nes parti cipated in the raid on New Providence in the Bahama Islands and the squadro n&#39;s engagement with HMS Glasgow, near Block Island, Rhode Island . T he mishandling of the latter engagement by Hopkins convin ced Jon es that he had nothing to learn fro m either Sal ronstall , whose style of command Jones had already co me to despise, or Hopkins and prompted him to criticize both of these New England officers-but particularly Saltonstall- in letters to Joseph H ewes, a delegate to Co ngress from North Carolina and Jones&#39;s friend and benefactor. G iven another chance at an independent command , Jones eagerly accepted Providence, a &quot;li ghtl y arm ed&quot; sloop. With Providence, Jones-who sho rtly

john Paul Jo nes, by Charles Willson Peale, ca. 1781 (Courtesy Independence National Historical Park, Philadelphia PA) after taking command received a captain &#39;s commission in the Continental Navymade a cruise to the Grand Banks in September 1776 . During that cruise, which lasted &quot;Six weeks and five days,&quot; Jo nes captured sixteen British merchant vessels and des troyed the local fishing fl eets at Canso and Isle Madame, Nova Scotia. In November, he made a second cruise to the Grand Banks, this time as captain of the larger Alfted. Accompanying Jones was Providence, co mma nded by Hoysteed H acker. During this cruise, Jones rook seven more prizes, including the armed transport Melish and its cargo of winter uniforms, which were distributed to the then near-naked Continental Army. While o n the cruise, Providence began taking on water and her officers agitated to return to Rh ode Island. Jones, whose own ship had a pump goi ng continuously, believed the agitation to be &quot;Unacco unrab le murmuring&quot; and tried to persuade the crew to continue and complete the squadron &#39;s mission, which was to &quot;relieve a number of our Citi ze ns from Slavery in the Coal mines&quot; of Cape Breton. Bur the following night, during a &quot;slight Snow Squall,&quot; Hacker gave Jo nes &quot;the Slip&quot; and sailed back to Rhode Island. 1 Despite the desertion of Providence and disco ntenr among his own crew, Jones continued the mission and, though unable to &quot;relieve&quot; the American priso ners who had enlisted in the Royal Navy, captured or destroyed six addition al British vessels.