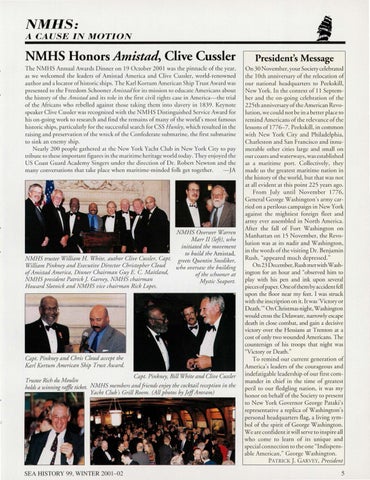 NMHS: A CAUSE I N MOTI ON

NMHS Honors Amistad, Clive Cussler The NMHS Annual Awa rds Dinner on 19 October 2001 was rhe pinnacle of rhe year, as we welcomed the leaders of Amisrad America and Clive C ussler, world-renowned aurhor and a locator of histo ric ships. The Karl Korrum American Ship TrusrAward was presenred to rhe Freedom Schoo ner Amistad fo r irs missio n to educare Americans about rhe history of rhe Amistad and its role in the firsr civil rights case in America-the trial of rhe Africa ns who rebelled against rhose raking them in to slavery in 1839. Keynote speaker Clive C ussler was recognized wirh rhe NMH S Distinguished Service Award for his on-going work to research and find the remains of many of rhe world's most famous histo ri c ships, particularly for rhe successful search for CSS Hunley, which resulted in the raising and preservation of the wreck of rhe Co nfederare submarine, rhe first submarine to sink an enemy ship. Nearly 200 people gathered ar the New York Yacht C lub in New York C iry ro pay tribute to these importanr fi gures in the maritime herirage world today. They enjoyed the US Coast G uard Academy Singers under the directio n of Dr. Robert Newton and the many co nve rsations that take place when maritime-minded folk get togerher. - JA

President's Message On 30 November, your Socierycelebrated the 10th anniversary of the relocation of our national headquarters to Peekskill, New York. In the co nrexr of 11 September and the on-going celebration of rhe 225th anniversa ry of the American Revolution , we could not be in a better place to remind Ameri ca ns of the relevance of the lessons of 1776-7. Peekskill, in common with New York C iry and Philadelphia, C harlesro n and San Francisco and innumerable orher ciri es large and small on our coasrs and warerways, was esrabl ished as a maritime port. Collectively, they made us rhe greares r maririme narion in th e histo ry of the world, but that was not ar all evidenr at rhis poinr 225 years ago. From July unril November 1776, General George Washingron's army carri ed on a perilous campaign in New York against the mighries t foreign fleer and arm y ever assembled in Norrh America. Afrer the fall of Fort Washington on M anhattan on 15 November, the Revolurion was ar irs nadir and Washington, in rhe words of rhe visiting Dr. Benjamin Rush, "appeared much depressed ." On23December, Rushmetwith Washington for an hour and "observed him ro play wirh his pen and ink upon several pieces of paper. One of them by accidenr fell upon the floor near my feet. I was struck wirh rhe inscriprion on it. Ir was 'Victory or D earh. "' On Christmas night, Washington would cross the Delaware, narrowly escape dearh in close combar, and gain a decisive victory over the Hessians ar Trenron ar a cosr of only rwo wounded Americans. The counrersign of his troops rhat night was "Victo1y or Dearh. " To remind our currenr generation of America's leaders of rhe courageous and indefarigable leadership of our firsr commander in chief in rhe rime of greatest peri l to our fledgling narion, it was my honor on behalf of the Sociery to presenr to New York Governor George Pataki 's represenrative a replica of Washington 's personal headquarrers flag, a living symbol of rhe spirit of George Washington . We are confident it will serve to inspire all who come ro learn of its unique and special connecrion to rhe one "Indi spensab le American, " George Washington. PATRI CK ]. GARVEY, President