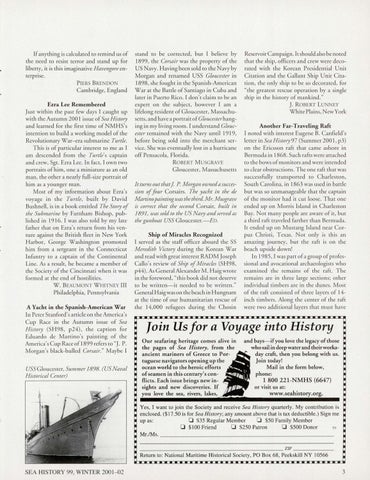 If anything is calculated to remind us of the need to resist terror and stand up for liberty, it is this imaginative H avengore enterprise. PI ERS B RENDON

stand to be corrected, but I believe by 1899, the Corsair was the property of the US Navy. Having been sold to the Navy by Morgan and renamed USS Gloucester in 1898, she fought in the Spanish-American War at the Barde of Santiago in Cuba and later in Puerto Rico. I don&#39;t claim to be an expert on the subject, however I am a lifelong resident of Gloucester, Massachusetts, and have a portrait of Gloucester hanging in m y livi ng room. I und erstand Gloucester remained with the Navy until 1919, before being sold into the merchant service. She was eventually lost in a hurricane off Pensacola, Florida.

Ezra Lee Remembered Just within the past few days I caught up with the Autumn 2001 issue of Sea H istory and learned for the first time ofNMHS&#39;s intention to build a working model of the Revolutionary War-era submarine Turtle. This is of particular interest to me as I am descended from the Turtle&#39;s captain R OBERT MUSG RAVE and crew, Sgt. Ezra Lee. In fact, I own two Gloucester, Massachusetts portraits of him, one a miniature as an old man, the other a nearly full-size portrait of I t turns out that]. P. Morgan owned a succeshim as a younger man. Most of my information about Ezra&#39;s sion offour Corsai rs. The yacht in the de voyage in the Turtle, built by David Martino painting was the third. Mr. Musgrave Bushnell, is in a book entitled The Story of is correct that the second Corsair, built in the Submarine by Farnham Bishop, pub- 1891, was sold to the US Navy and served as lished in 1916. I was also told by my late the gunboat USS Gloucester. -ED. father that on Ezra&#39;s return from his venShip of Miracles Recognized ture against the British fl eet in New York Harbor, George Washington promoted I served as the staff officer aboard the SS him from a sergeant in the Co nn ecticut Meredith Victory during the Korean War Infantry to a captain of the Continemal and read with great interest RADMJoseph Line. As a result, he became a member of Calla&#39;s review of Ship ofMiracles (SH98 , the Society of the C incinnati when it was p44) . As General Alexander M. H aig wrote in the foreword, &quot;this book did not deserve formed at the end of hosti liti es. to be written-it needed to be written.&quot; W. BEAUMONT WHITNEY III General Haig was on the beach in Hungnam Philadelphia, Pennsylvania at the time of our humanitarian rescue of the 14,000 refugees during the Chosin A Yacht in the Spanish-American War In Peter Stanford&#39;s article on the America&#39;s C up Race in th e Autumn issue of Sea H istory (S H98 , p24), th e caption for Eduardo de Martino&#39;s paintin g of th e Our seafaring heritage comes alive in America&#39;s C up Raceof l899 refers to &quot;J.P . the pages of Sea History, from the Morgan&#39;s black- hulled Corsair.&quot; Maybe I ancient mariners of Greece to Portuguese navigators opening up the ocean world to the heroic efforts USS Gloucester, Summer 1898. (US Naval of seamen in this century&#39;s conHistorical Center) flicts. Each issue brings new insights and new discoveries. If you love the sea, rivers, lakes,

Reservoir Campaign . It should also be noted that the ship, officers and crew were decorated with the Korean Presidential Unit C itation and the Gallant Ship Unit Citation, the only ship to be so decorated, for &quot;th e greatest rescue operation by a single ship in the histo ry of mankind. &quot; ]. ROBERT L UNNEY

White Plains, N ew York Another Far-Traveling Raft I noted with interest Eugene B. Canfield&#39;s letter in Sea H istory 97 (Summer 2001, p3) on the Ericsson raft that came ashore in Bermuda in 1868 . Such rafts were attached to the bows of monitors and were intended to clear obstructions. The one raft that was successfully transported to Charleston, South Carolina, in 1863 was used in battle but was so unmanageable that the captain of the monitor had it cut loose. That one end ed up on Morris Island in Charleston Bay. Not many people are aware of it, but a third raft traveled farther than Bermuda. Ir ended up on Mustang Island near Corpus Christi , Texas. Not only is this an amazing journey, but the raft is on th e beach upside down! In 1985 , I was part of a group of professional and avocational archaeologists who examined the remains of the raft. The remains are in three large sections; other individual timbers are in the dunes. Most of the raft consisted of three layers of 14inch timbers. Along the center of the raft were two additional layers that must have

Join Us fo r a Voyage into History and bays- if you love the legacy of those who sail in deep water and their workaday craft, then you belong with us. Join today! Mail in the form below, phone: