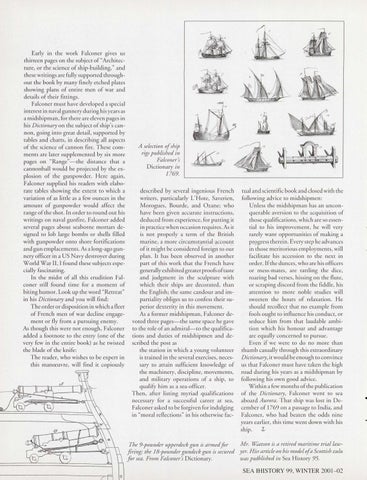 Early in the work Falconer gives us thirteen pages on the subj ect of&quot;Architecture, or the science of ship-building,&quot; and these writings are fully supported throughour the book by many fin ely etched plates showing plans of entire men of war and details of their fotings. Falconer must have developed a special interest in naval gunn ery durin g his years as a midshipman, for rhere are eleven pages in his Dictionary on the subj ect of ship&#39;s cannon, going into great detail , supported by tables and charts, in describing all aspects of the science of cannon fire. These comments are later supplemented by six more pages o n &quot;Range&quot;-rhe distance chat a cannonball wo uld be proj ected by the explosion of the gunpowder. Here again, Falconer supplied his readers with elaborate tables showing the extent to which a variation of as little as a few ounces in the amount of gunpo wder wo uld affect the range of the shot. In order to round out his writings o n naval gunfire, Falconer added several pages abo ut seaborne mortars designed to lob large bombs or shells filled with gunpowder onto sho re fortifications and gun emplacements. As a long-ago gunnery officer in a US Navy destroyer during World War II, I found these subj ects especially fascinating. In the midst of all this erudition Falconer still found time for a moment of bi rin g humor. Look up the word &quot;Retreat&quot; in his Dictionary and you will find : The order or disposition in which a fleet of French men of war decline engagement or fl y from a pursuing enem y. As though this were nor enough, Falconer added a footnote to the entry (one of the ve ry few in the entire book) as he twisted the blade of the knife: The reader, who wishes to be expert in this manre uvre, will find it copiously

A selection ofship rigs published in Falconer&#39;s Dictionary in 1769. described by several ingenio us French writers, particularly L&#39;Hote, Saverien, Morogues, Bourde, and Ozane; who have been given accurate instructions, deduced from experience, for pmting it in practice when occasion requires. As ir is not properly a term of the British marine, a more circumstantial acco unt of it might be co nsidered foreign to our plan. It has been observed in another part of rhis work char rhe French have generally exhibi red greater proofs of taste and judgment in rhe sculpture with whi ch their ships are decorated , than rhe English; the same candour and impartiali ty obliges us to confess their superior dexterity in this movement. As a for mer midshipman, Falco ner devoted three pages-the same space h e gave to rhe role of an admiral-to the qualifications and duties of midshipmen and described the post as the station in which a young volunteer is trained in the several exercises, necessary to attain sufficient knowledge of the machinery, discipline, movements, and military operations of a ship , to qualify him as a sea-officer. T hen, after listing myriad qualifications necessary for a successful career ar sea, Falconer asked to be forgiven fo r indulging in &quot;moral reflections&quot; in his otherwise fac-

rual and scientific book and closed with the following advice to midshipmen: U nless th e midshipman has an unconquerable aversio n to the acq uisiti o n of those qualifications, which are so essential to his improvement, he will very rarely want opportunities of making a prggress therein. Every step he ad vances in rhose meritorious employments, will facilitate h is accession to the nexr in order. If the dunces, who are his officers or mess-mares, are rattling rhe dice, roari ng bad verses, hissing on rhe flu re, or scraping discord from the fiddle, his attention to more noble studies will sweeten the hours of relaxation. He sho uld recollect that no example from foo ls ough t to influence his conduct, or seduce him from char laudable ambition whi ch his honour and advantage are equally concerned to pursue. Even if we were to do no more than thumb cas ually through chis extraordinary Dictionary, it wo uld be enough to convince us that Falconer must have taken the high road during his years as a midshipman by followi ng his own good advice. Within a few monrhs of the publi cation of the Dictionary, Falconer wenr to sea aboard Aurora. That ship was lost in D ecember of 1769 on a passage to India, and Falconer, who had beaten the odds nine years earl ier, this time went down with his ship . ,!,