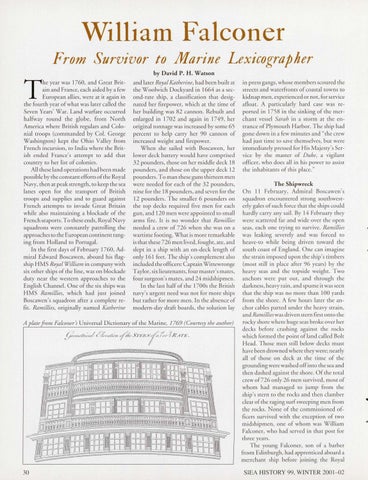 he year was 1760, and Grear Britain and France, each aided by a few European allies, were at it again in the fourth yea r of what was later called the Seven Years&#39; War. Land warfare occurred halfway round the globe, from North America where British regulars and Co lonial troops (commanded by Col. George Washington) kept the Ohio Valley from French incursion, to India where the British ended France&#39;s attempt to add that country to her list of colonies . All these land operations had been made possible by the cons tant efforts of the Royal Navy, then at peak strength, to keep the sea lanes open for the transport of British troops and supp lies and to guard against French attempts to invade Grear Britain while also maintaining a blockade of the French seaports. To these ends, Royal Navy squadrons were constan tly patrolling the approaches to the European continent ranging from Holland to Portugal. In the first days of February 1760, Admiral Edward Boscawen, aboard his flagship HMS Roya/William in company with six other ships of the line, was on blockade duty near the western approaches to the English Channel. One of the six ships was HMS Ramillies, which had just joined Boscawen&#39;s squadron after a complete refit. Ramillies, originally named Katherine

and later Royal Katherine, had been built at the Woolwich Dockyard in 1664 as a second-rate ship, a classification that designated her firepower, which at the rime of her building was 82 cannon. Rebuilt and enlarged in 1702 and again in 1749, her original tonnage was increased by some 65 percent to help carry her 90 cannon of increased weight and firepower. When she sailed with Boscawen, her lower deck battery would have comprised 32 pounders, those on her middle deck 18 pounders, and those on the upper deck 12 pounders. To man these guns thirteen men were needed for each of the 32 pounders, nine for the 18 pounders, and seven for the 12 pounders. The smaller 6 pounders on the top decks required five men for each gun, and 120 men were appointed to small arms fire. Ir is no wo nder that Ramillies needed a crew of 726 when she was on a wartime foot ing. What is more remarkable is that these 726 men lived, fought, ate, and slept in a ship with an on-deck length of only 161 feet. The ship&#39;s complement also included the officers: Captain Wi ttewronge Taylor, six lieutenants, four master&#39;s mates, four surgeon &#39;s mares, and 24 midshipmen. In the last half of the 1700s the British navy&#39;s urgent need was not for more ships but rather for more men. In the absence of modern-day draft boards, rhe so lution lay

in press gangs, whose members sco ured the streets and waterfronts of coastal towns to kidnap men, experienced or not, for se rvice afloat. A particularly hard case was reported in 1758 in the sinking of the merchant vessel Sarah in a storm at the entrance of Plymo uth H arbor. The ship had go ne down in a few minutes and &quot;the crew had just time to save th emselves, but were imm ediately pressed for His Maj esty&#39;s Service by the mas ter of Duke, a vigilant officer, who does all in his power to ass ist rhe inhabitants of this place.&quot;

The Shipwreck On 11 February, Admiral Boscawe n&#39;s squadron encountered stro ng southwesterly gales of such force that the ships could hard ly carry any sail. By 14 February they we re scattered far and wide over the open seas, each one trying to survive. Ramillies was leaking severely and was forced to heave-to while being dri ven toward the so uth coast of England. One can imagine the strain imposed upon the ship&#39;s timbers (most still in place afte r 96 years) by the heavy seas and the topside weight. Two anchors were put out, and through the darkn ess, heavy rain, and spume it was seen that the ship was no more than 100 ya rds from the shore. A few hours later the anchor cables parred under the heavy strain , and Ramillieswas driven stern first onto the rocky shore where huge seas broke over her decks before crashing against the rocks which formed the point of land called Bo lt H ead. Those men still below decks must have been drowned where they were; nearl y all of those on deck at the time of the gro unding were washed off in to the sea and then das hed against the shore. Of the total crew of726 only 26 men survi ved, most of whom had managed to jump from the ship &#39;s stern to the rocks and then clamber clear of the raging surf sweeping men from the rocks. None of the commiss ion ed officers survived with the exception of rwo midshipmen, one of whom was W illiam Falconer, who had served in that post for three years. The yo ung Falconer, son of a barber frmm Edinburgh, had apprenti ced aboard a me rchant ship befo re joining the Royal SJEA HISTORY 99, WINTER 2001-02