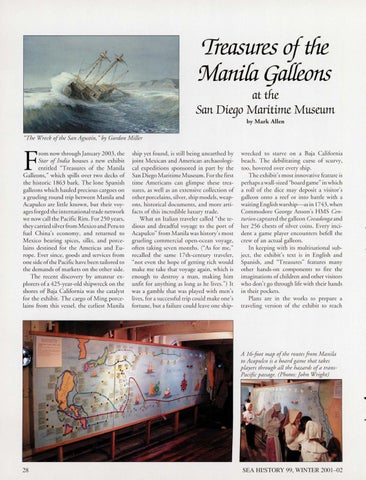 rom now through January 2003, the Star of India houses a new exhibit entitled &#39;&#39;Treasures of the Manila G alleons, &quot; which spills over two decks of the historic 1863 bark. The lone Spanish galleons which hauled precious cargoes on a grueling round rrip between Ma nila and Acapulco are little known, but their voyages forged th e international trade network we now call th e Pacific Rim . For 25 0 years, they carried silver fr om Mexico and Peru to fuel China&#39;s eco nomy, and return ed to M exico bearing spices, silks, and porcelains destined for the Americas and Europe. Ever since, goods and services from one side of the Pacific have been tailored to the demands of markets on the other side. The recent discovery by amateur explorers of a 425-year-old shipwreck on the shores of Baja California was the catalyst for the exhibit. T he cargo of Ming porcelains from this vessel, the earliest Manila

ship yet fo und, is still being unearthed by joint M exican and Ameri can archaeological expeditions sponso red in part by the San Diego Maritime M useum. For the firs t time Americans can glimpse these treasures, as well as an extensive collection of oth er porcelains, siIver, ship models, weapons, historical documents, and more arrifac ts of this in credible luxury trade. W hat an Italian traveler called &quot;the tedious and dreadful voyage to the port of Acapulco&quot; fro m Manila was history&#39;s most grueling commercial open-ocean voyage, often taking seven mo n ths. (&quot;As for me, &quot; recalled the same 17th-century rraveler, &quot;not even the hope of getting rich would make me take that voyage again, which is enough to destroy a man, making him unfit fo r anything as long as he lives. &quot;) It was a gamble that was played with men&#39;s lives, for a success ful trip could make one&#39;s fo rtune, bur a failure could leave o ne ship-

wrecked to starve on a Baja Californi a beach. T he debilitating curse of scurvy, too, hovered over every ship. T he exhibit&#39;s most innovative fea ture is perhaps a wall-sized &quot;boa rd game&quot; in which a roll of the dice may deposit a visitor&#39;s galleon o nto a reef or into battle with a wai ti ng English warship-as in 1743, when Com modo re George Anso n&#39;s HMS Centurion captured the galleon Covadonga and her 256 chests of silve r co ins. Every incident a game player encounters befell the crew of an ac tual galleon. In keeping with its multinational subject, the exhibit&#39;s text is in English and Spanish, and &quot;Treasures&quot; fea mres many other hands-on co mponents to fire the imaginations of children and other visitors who don &#39;t go through life with their hands in their pockets. Plans are in the wo rks to prepare a travel ing version of the exhibit to reach

A 16-Joot map of the routes from Manila to Acapulco is a board game that takes players through all the hazards ofa transPacific passage. (Photos: John Wright)