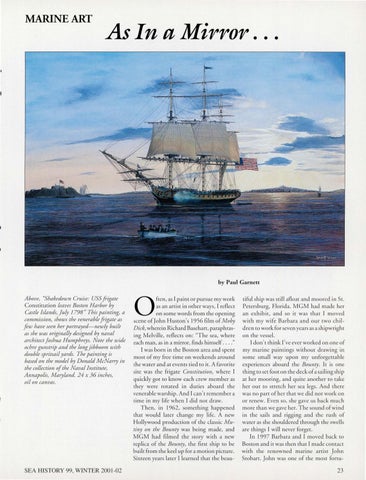 As In a Mirror.

Above, &quot;Shakedown Cruise: USS frigate Constitution !eaves Boston Harbor by Castle Islands, July 1798 &quot; This painting, a commission, shows the venerable frigate as few have seen her portrayed-newly built as she was originally designed by naval architect Joshua Humphreys. Note the wide ochre gunstrip and the !ongjibboom with double spritsail yards. The painting is based on the mode! by Donald McNarry in the collection ofthe Nava! Institute, Annapolis, Maryland. 24 x 36 inches, oil on canvas.

ften, as I paint or pursue my work as an artist in other ways, I reflect on som e words from the opening scene of John Huston&#39;s 1956 film of Moby Dick, wherein Richard Basehart, paraphrasing Melvi lle, refl ects on: &quot;The sea, where each man, as in a mirror, finds himself . .. .&quot; I was born in the Boston area and spent most of my free time on weekends aro und the water and at events tied to it. A favorite site was th e fri gate Constitution, where I quickly go t to know each crew member as they were rotated in duties aboard the venerable warship. And I can&#39; t rem ember a time in my life when I did no t draw. Then, in 1962, som ething happened that would later change my life. A new Ho llywood production of th e cl assic Mutiny on the Bounty was being made, and MGM had film ed the srory with a new replica of th e Bounty, the first sh ip to be built from the keel up for a motion picture. Sixteen years late r I learned th at the beau-

tiful ship was still afl oat and m oored in Sr. Petersburg, Florida. MGM had made her an exhibit, and so it was that I mo ved with my wife Barbara and our two children to work for seven yea rs as a shipwri ght on the vessel. I don &#39;t think I&#39;ve ever worked on one of my marine paintin gs without drawing in som e small way upon m y unforgettable experiences aboard the Bounty. It is o ne thing to set foot on the deck of a sailing ship at her moo rin g, and quite another to take her out to stretch her sea legs. And there was no part of her that we did not work on or renew. Even so, she gave us back much more than we gave her. The so und of wind in the sails and riggin g and the rush of water as she shouldered through the swells are things I will never forget. In 1997 Barbara and I moved back ro Boston and it was then that I made co ntact with the renowned m arine arti st John Stobart. John was one of the most fortu-