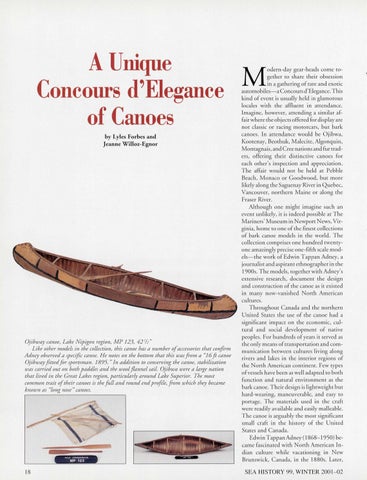 Ojibway canoe, Lake Nipigon region, MP 123, 42&#39;h&quot; Like other models in the collection, this canoe has a number ofaccessories that confirm Adney observed a specific canoe. H e notes on the bottom that this was from a &quot;1 6 ft canoe Ojibway fitted for sportsman. 1895. &quot;In addition to conserving the canoe, stabilization was carried out on both paddles and the wool flannel sail. Ojibwa were a large nation that lived in the Great Lakes region, particularly around Lake Superior. The most common trait oftheir canoes is the full and round end profile, from which they became known as &quot;long nose&quot; canoes.

odern-day gear-heads come togeth er to share their obsession in a gathering of rare and exotic automobiles-a Concours d&#39;Elegance. T his kind of event is usually held in glamoro us locales with rhe affluem in attendance. Imagine, however, attending a similar affair where the obj ects offered for display are nor classic or racing moto rcars, but bark canoes. In attendance would be Ojibwa, Koorenay, Beo rhuk, Malecire, Algonquin, Montagnais, and C ree nations and fur traders, offering their distinctive ca noes for each other&#39;s inspectio n and appreciatio n. T he affair wo uld not be held at Pebble Beach , Monaco or Goodwood, bur mo re likely along the Saguenay River in Quebec, Vancouver, northern Ma ine or along the Fraser Rive r. Although one might imagine such an event unlikely, it is indeed possible at T he Mariners&#39; Museum in Newport News, Virginia, home to one of rhe fin es t coll ections of bark canoe models in th e world. The collection comprises o ne hundred rwentyone amazingly precise one-fifth scale models-the work of Edwin Tappan Adney, a journalist and aspiram ethn ographer in the 1900s. T he models, together with Adney&#39; s extensive research, docum ent the design and constructio n of rhe ca noe as it existed in many no w-va nished North Ame ri can cultures. Throughout Ca nada and the northern United Stares rhe use of rhe canoe had a significam impac t o n the economic, cultural and social developmem of native peoples. For hundreds of years it served as the only means of transportation and communication betwee n cultures living along rivers and lakes in the interior regions of the North American cominen t. Few types of vessels have been as well adapted to both fun ction and natural environmem as the bark canoe. T heir design is lightweight but hard-wea ring, maneuverable, and easy to portage. T he m aterials used in rhe craft we re readily ava ilable and easily malleable. The canoe is arguably the most signifi.cam small craft in the histo ry of the U nited Stares and Canada. Edwin Tap pan Adney (1868-1950) becam e fascinated with No rth American In dian culture while vacationing in New Brunswick, Canada, in the 1880s. Later,