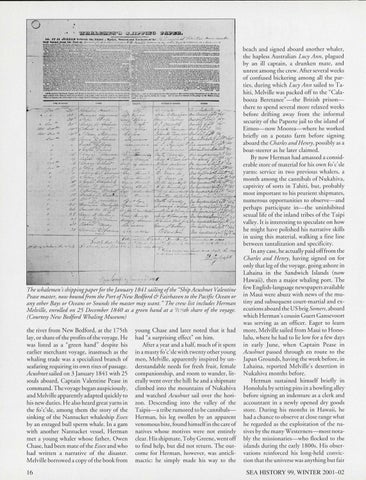 The whalemen shipp ing paper for the January 1841 sailing of the &quot;Ship A cushnet Valentine Pease master, now boundfrom the Po rt ofNew Bedford &amp; Fairhaven to the Pacific Ocean or any other Bays or Oceans or Sounds the master may want. &quot; The crew list includes H erman Melville, enrolled on 25 D ecember 1840 as a green hand at a 1/J 15th share of the voyage. (Courtesy New Bedford Whaling M useum)

the river from N ew Bedford, at the 175th lay, or share of the profits of the voyage. H e was listed as a &quot;green hand&quot; despite his earlier merchant voyage, inasmuch as the whaling trade was a specialized branch of seafaring requiring its own rites of passage. A cushnet sailed on 3 January 184 1 with 25 souls aboard, Caprain Valentine Pease in command. The voyage began auspiciously, and Melville apparently adapted quickly to his new duties . H e also heard great yarns in the fo &#39;c&#39;sle, amo ng th em the story of th e sinking of the Nantucket whaleship Essex by an enraged bull sperm whale. In a gam with another Nantucket vessel, H erman mer a young whaler whose father, O wen Chase, had been mare of the Essex and who had written a narra tive of the disaster. Melville borrowed a copy of the book from

yo ung Chase and later noted that it had had &quot;a surprising effect&quot; on him. After a year and a half, much of it spent in a musty fo &#39;c&#39;sle with twenty other yo ung men, Melville, apparently inspired by understandable needs for fresh fruit, female companionship, and room to wander, literally went over the hill: he and a shipm ate climbed into the mountains of N ukahiva and watched A cushnet sail over th e horizon. Descending into the valley of the Taipis-a tribe rumored to be cannibalsH erman, his leg swollen by an apparent venomous bite, found himselfin the care of natives whose motives were not entirely clear. His shipmate, T oby G reene, we nt off to find help, but did nor return . T he outcome for H erman, however, was anticlimactic: he simply made his way to the

beach and signed aboard another whaler, the hapless Australian Lucy Ann, plagued by an ill captain, a drunken m ate, and unrest among the crew. After several weeks of confused bi ckering among all the parties, during which Lucy A nn sailed to Tahiti , Melville was packed off to the &quot;Calabooza Beretanee&quot;-the British p risonrhere to spend several more relaxed weeks before drifting away from rhe info rmal securi ty of the Papeete jail to the island of Eimeo- now M oorea-where he worked briefly on a potato farm before signing aboard th e Charles and H enry, possibly as a boar-steerer as he later claimed . By now H erman had amassed a co nsiderable store of material fo r his own fo &#39;c&#39;sle yarns: service in two previous wh alers, a month among th e cannibals ofNukahiva, captivity of sorts in T ahiti , but, probably most important to his prurient shipmates, numerous opportunities to observe-and perhaps participate in- the uninhibited sexual life of the inland tribes of the Taipi valley. It is interesting to speculate on how he might have polished his narrative skills in using this material, walking a fine line between tantalization and specificity. In any case, he actually paid off from the Charles and H enry, having signed on for only that leg of the voyage, going ashore in Lahaina in the Sandwich Islands (now H awaii), then a major whaling port. The few English-language newspapers available in M aui we re abuzz with news of the mutiny and subsequent co urt-martial and executions aboard the US brig Somers, aboard which H erman&#39;s cousin G uerr Gansevoort was serving as an offi cer. Eager ro learn more, Melville sailed fr om M aui to Honolulu, where he had to lie low for a few days in early June, wh en C aptain Pease in Acushnet passed through en route to rhe Japan G rounds, having the week before, in Lahaina, reported Melville&#39;s desertion in N ukahiva months before. H erm an sustained himself briefly in H onolulu by setting pins in a bowling alley befo re signing an indenture as a clerk and acco untant in a newly opened dry goods store. During his months in H awaii , he had a chance to observe at close range what he regarded as rhe exploitation of the natives by the many Westerners-most notably the missionaries-who flo cked to the islands during the early 1800s. His observations reinforced his long-held conviction that the universe was anything but fair