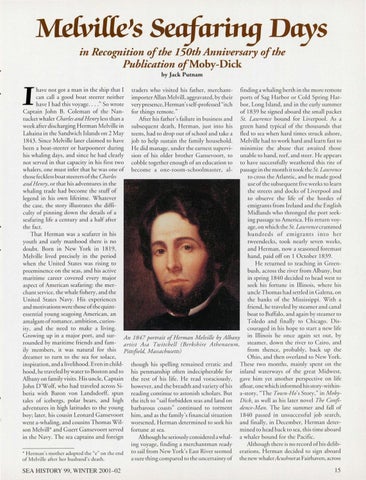 have no[ go[ a man in [he ship [ha[ I traders who visi[ed his fa[ her, mercham- finding a whaling berth in rhe more remote ca n call a good boa[ S[ee[e[ nei[he[ importer Allan Melvill, aggravated, by their ports of Sag H arbor or Cold Spring Harhave I had [his voyage .... " So wro[e very presence, Herman's self-professed "i[ch bor, Long Island, and in rhe early summer Caprnin John B. Coleman of [he Nan- for things remote." of 1839 he signed aboard rhe small packet m cke[ whaler Charles and Henry less [han a Afrer his father's fa ilure in business and St. Lawrence bound for Liverpool. As a week afrer discharging H erman Melville in subsequem death, Herman, jus[ into his green hand rypical of [he thousands that Lahaina in [he Sandwich Islands on 2 May teens, had to drop o ut of school and take a fl ed to sea when hard rimes struck ashore, 1843. Sin ce Melville later claimed to have job to help sustain the family household. Melville had to work hard and learn fast to been a boat-S[eerer or harpooneer during He did manage, under the earnest supervi- minimize the abuse rhat awaited those his whaling days, and since he had clearly sion of his older brother Ga nsevoo rt, to unable to hand , reef, and steer. He appears no[ served in [ha[ capaciry in his firs[ rwo cobb le together enough of an edu cation to to have successfully weath ered rhis rire of whal ers, o ne must infer that he was one of become a one-room-schoolmaster, al- passage in rhe mo nth it took rheSt. Lawrence [hose feckless boa[ S[eerers of [he Charles to cross rheA tlami c, and he made good and Henry, or that his adventures in the use of the subsequent five weeks to learn whaling trade had become the sm ff of the streets and docks of Liverpoo l and legend in his own lifetime. Whatever to observe rhe life of the hordes of the case, the story illustrates the diffiemigram s from Irela nd and rhe Engli sh cul ry of pinning down the de[ails of a Mi dl ands who thronged rhe porr seeking passage to America. His return voyseafarin g life a century and a half afrer the facL age, on whi ch rh e St. Lawrence cram med That H erman was a seafarer in his hundr ed s of e mi g ra nt s in to h er yo uth and ea rl y manhood there is no rweendecks, took nea rly seven weeks, doubL Born in New York in 1819, and H erman, now a seasoned foremast Melville lived precisely in the period hand, paid off on 1 October 1839. when [he U ni[ed Sta[es was rising to H e remrned to teaching in Greenpreeminence o n the seas, and his acti ve bush, across the river from Albany, bur mari[ime career covered every m ajor in spring 1840 decided to head west to seek his fortune in Illinois, where his aspect of American seafaring: the meruncle T ho mas had settled in Galena, on chant service, [he whale fishery, and the Uni[ed Sta[es Navy. His experiences rhe banks of the Mississippi. With a and mo[i vations were [hose of [he quimfri end , he traveled by steamer and canal essential yo ung seagoing American, an boat to Buffalo, and again by steamer to amalgam of romance, ambition, curiosTo ledo and finally to Chicago. Disiry, and [he need to make a living. couraged in his hope to start a new life Growing up in a major port, and sur- An 1847 portrait of Herman Melville by Albany in Illinois he once agai n ser our, by rounded by maritime friends and fam - artist Asa Twitchell (Berkshire Athenaeum, steamer, down rhe river to Cairo, and il y members, i[ was na[ural for [his Pittsfield, Massachusetts) from thence, probably, back up rhe dreamer to mrn to [he sea for solace, Ohio, and then overland to New York. insp iratio n, and a livelihood. Even in child- tho ugh his spel lin g remained erratic and T hese rwo momhs, mainly spent on rhe hood , he traveled bywa[er to Bosto n and to his penmanship often indecipherable for inland waterways of the great Midwest, Albany o n fami ly visits. His uncle, Cap rain the res [ of his life. He read vo raciously, gave him yet another perspective on life John D'Wolf, who had [raveled across Si- however, and the breadth and variety of his afloat, o ne which informed his story-withinberia wi[h Baron von Landsdorff, spun reading continue to asto ni sh scholars. Bu[ a-story, "T he Town-Ho's Story," in Mobyrnles of icebergs, polar bears, and hi gh the itch to "sail forbidden seas and land on Dick, as well as his late r novel The Confiadvemures in high latitudes to [he yo ung barbarous coasts" continued to torment dence-Man. T he late summer and fall of boy; la[er, his cousin Leonard Gansevoo rt him, and as the fami ly's fin ancial situation 1840 passed in unsuccessful job search, went a-whaling, and cousins Thomas Wil- worsened, H erman determined to seek his and finally, in December, Herman determined to head back to sea, this time aboard son Melvill* and G uerr Gansevoort served fortune at sea. in [he Navy. T he sea caprni ns and fore ign Although he seriously considered a whal- a whaler bound fo r th e Pacific. Al though there is no record of his delibing voyage, finding a merchantman ready Herman decided to sign aboard erations, to sai l from New York's East River seemed * Herman 's morher adopred rhe "e" on the end a sure thing compared to rhe uncerrainry of rhe new whalerAcushnetar Fairhaven, across of Me lville after her husband 's dearh.