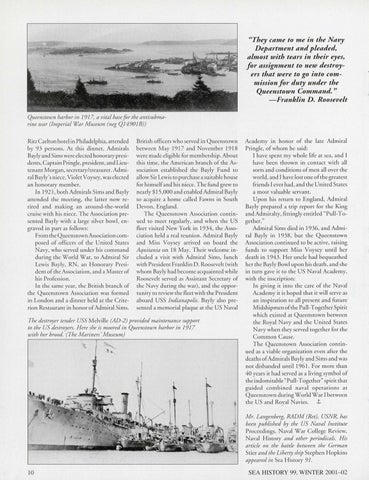 &quot;They came to me in the Navy Department and pleaded, almost with tears in their eyes, for assignment to new destroyers that were to go into commission for duty under the Queenstown Command. &quot; -Franklin D. Roosevelt Queenstown harbor in 1917, a vital base for the antisubmarine war (Imperial War Museum (neg Q14901B)) Ritz Carlton ho tel in Philadelphia, attended by 93 perso ns. At this dinner, Admirals Bayly and Sims were elected honorary pres idenrs, Captai n Pringle, presidenr, andLie urenanr Morgan, secretary/ treasurer. Admiral Bayly&#39; s niece, Violet Voysey, was elected an honorary member. In 1921, both Admirals Sims and Bayly arrended rhe meeting, rhe larrer now retired and making an around-the-world cruise with his niece. The Association presenred Bayly wirh a large silver bowl, engraved in pan as fo llows: From rhe Queenstown Association composed of officers of rhe U ni ted Stares Navy, who served under his co mmand during rhe Wo rld War, to Adm iral Sir Lewis Bayly, RN, an Honorary Presidenr of rhe Association, and a Master of his Profession. In rhe same year, rhe British branch of rhe Q ueenstown Associatio n was formed in London and a dinner held ar rhe C riterion Resrauranr in honor of Ad miral Sims.

British officers who served in Queenstown between May 191 7 and November 1918 were made eli gibl e for membership . About rhis rime, rhe American branch of rhe Association established rhe Bayly Fund to allow Sir Lewis to purchase as uirable house for himself and his niece. The fund grew to nearly $ 15 ,000 and enabled Admiral Bayly to acq uire a home called Fawns in South Devon, England. T he Queenstown Association conrinued to meet regularly, and when rhe US fl eer visited New York in 1934, rhe Association held a real re union. Admiral Bayly and Miss Voysey arrived on board rhe Aquitania on 18 May. T heir welcome included a vis it with Adm iral Sims, lunch with President Franklin D . Roosevelt (with whom Bayly had becom e acquai nted while Roosevelt served as Assistanr Secretary of th e Navy during the war), and the opportunity to review the fl eet with the Presidenr aboard USS Indianapolis. Bayly also presenred a memorial plaque at the US Naval

The destroyer tender USS Melvi ll e (AD-2) provided maintenance support to the US destroyers. Here she is moored in Queenstown harbor in 1917 with her brood. (The Mariners &#39; Museum)

Academy in honor of the late Admiral Pringle, of whom he said: I have spenr my whole life at sea, and I have bee n thrown in conract with all so rts and co nditions of men all over the world, and I have lost one of the greatest friends I ever had, and the United Stares a most valuable servant. Upon his return to England, Admiral Bayly prepared a trip report for rhe King and Admiralry, ftrringlyentirled &quot;Pull-Together. &quot; Admiral Sims died in 1936, and Admiral Bayly in 1938, bur the Queenstown Association continued to be active, raising funds to support M iss Voysey unril her death in 1943. Her uncle had bequeathed her the Bayly Bowl upon his death, and she in rum gave ir to rhe US Naval Academy, wirh rhe inscripti on: In giving it inro the care of rhe Naval Academy ir is hoped rhar ir wi ll serve as an insp iration to all presenr and future M idshipmen of rhe Pull-Together Spirit wh ich existed ar Q ueenstown between rhe Royal Navy and rhe United Stares Navy when they se rved together for rhe Common Cause. T he Queenstown Association co nrinued as a viable organization even after rhe deaths ofAdmirals Bayly and Sims and was not disband ed until 1961. For more than 40 years it had served as a living symbol of the indomitable &quot;Pull-Together&quot; spirit that gu id ed co mbin ed naval operations at Q ueenstown during World War I between the US and Royal Navies. .t

Mr. Langenberg, RADM (Ret), USNR, has been published by the US Naval Institute Proceedings, Naval War College Review, Naval Histo ry and other periodicals. His article on the battle between the German Stier and the Liberty ship Stephen H opki ns appeared in Sea History 91.