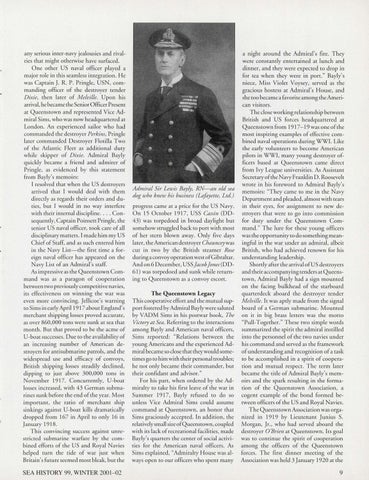 any serious inter-navy jealousies and rivalries rhat might othe1w ise have surfaced . One o ther US naval officer played a m ajo r role in this seamless integration. H e was Captain]. R. P. Pringle, USN, co mmanding officer of the destroyer tender D ixie, then later of Melville. Upon his arrival, he became the Senior O ffi cer Present at Queenstown and represented V ice Admiral Sims, who was now headquartered at London. An experienced sail or who had commanded the des troyer Perkins, Pringle later commanded D estroyer Flo tilla T wo of the Atlantic Fleet as additi onal duty while skip per of Dixie. Admiral Bayly quickly became a fri end and admirer of Pringle, as evidenced by this statement fro m Bayly&#39;s memoirs: I resolved that when the US destroyers arrived that I wo uld deal with them di rectly as rega rds their orders and duties, but I wo uld in no way interfere with their internal discipline . .. . Consequently, Captain Poinsett Pringle, the senior US naval officer, took care of all disciplinary matters. I m ade him my US Chief of Staff, and as such entered him in the Navy List- the first time a foreign naval offi cer has appeared on the Navy List of an Admiral&#39;s staff. As impressive as the Queenstown Command was as a paragon of cooperation berween rwo previously competitive navies, its effectiveness o n winning the war was even more co nvincing. Jellicoe&#39;s warning to Sims in early April 19 17 abo ut England&#39;s merchant shippi ng losses proved accurate, as over 860,000 to ns were sunk at sea that mo nth . But that proved to be the acme of U- boat successes. Due to the availabiliry of an increasing number of American destroyers for antisubmarine patrols, and the widespread use and effi cacy of convoys, British shipping losses steadily declined, dipping to just above 300 ,000 tons in November 19 17. Concurrently, U-boat losses increased, with 43 German submari nes sun k before the end of the year. Most important, the ratio of merchant ship sinkings against U -boat kills dram atically dro pped fro m 167 in April to only 16 in January 1918. T his convincing success against un restricted submarine warfare by the com bined efforrs of the US and Royal Navies helped turn the tide of war just when Britain &#39;s future seemed most bleak, but th e

The Queenstown Legacy T his cooperative effort and the mu rual support fos tered by Admiral Bayly were saluted by VADM Sims in his posrwar book, The Victory at Sea. Referring to the interactions am ong Bayly and American naval officers, Sims reported: &quot;Relations berween the yo ung Americans and the experienced Admiral became so close thattheywould so metimes go to him with their personal troubles; he no t only became their commander, but their co nfidan t and adviso r. &quot; For his part, when ordered by the Admi ralry to take his fi rst leave of the war in Summer 1917, Bayly refused to do so unless V ice Admiral Sims could ass ume command at Queenstown , an honor that Sims graciously accepted . In addition, the relatively small size of Queenstown, coupled with its lack of recreational facilities, m ade Bayly&#39;s quarters the center of social acti vities fo r the American naval officers . As Sims explained, &quot;Admiralry H ouse was always open to o ur officers who spent m any

a night around the Admiral&#39;s fire. T hey were constantly entertained at lunch and dinner, and they were expected to drop in fo r tea when they were in port.&quot; Bayly&#39;s niece, M iss Violet Voysey, served as the gracio us hostess at Admiral&#39;s H o use, and she too becam e a favorite am ong the American visitors. T he close working relationship berween British and US for ces headquartered at Queenstown from 191 7- 19 was one of the m ost inspiring examples of effecti ve com bined naval operations during WWI. Like the early volunteers to beco me American pilots in WWI, many yo ung destroyer offi cers based at Queenstown cam e direct from Ivy League unive rsities. As Assistant Secreta1y of the Navy Franklin D . Roosevelt wrote in his foreword to Admiral Bayly&#39;s m emoirs: &quot;They cam e to m e in the Navy Department and pleaded, almost w ith tears in their eyes, for assignment to new destroyers that we re to go into commission for du ry under th e Q ueenstown Com m and.&quot; T he lure for these yo ung offi cers was the opportuni ry to do something meaningful in the war under an admiral, albeit British , who had achieved renown fo r h is understanding leadership. Shortly after the arrival of US destroye rs and their acco mpanying tenders at Queenstown, Admiral Bayly had a sign m oun ted on the facing bulkhead of the starboard quarterdeck aboard the destroye r tender M elville. It was aptly m ade from the signal board of a German submarine. Mounted on it in big brass letters was the motto &quot;Pull-Together. &quot; These rwo simple wo rds summarized the spirit the admiral instilled into the personnel of the rwo navies under his co mmand and served as the fram ework of understanding and recognition of a task to be acco mplished in a spirit of cooperation and mutual respect. T he term later became th e tide of Admiral Bayly&#39;s m emoirs and the spark resulting in the form atio n of the Q ueenstown Association, a cogent example of the bond formed berween officers of the US and Royal Navies. The Q ueenstown Association was organized in 1919 by Lieutenant Junius S. Mo rgan , Jr. , wh o had served aboard the destroyer O&#39;Brien at Q ueenstown. Its goal was to co ntinue the spirit of cooperation am ong the officers of the Queenstown fo rces. T he first dinner meeting of the Association was held 3 January 1920 at the