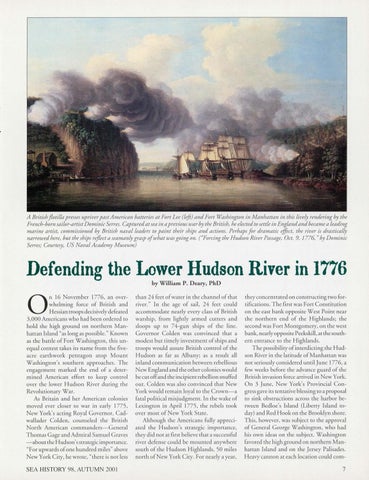 A British flotilla presses upriver past American batteries at Fort Lee (left) and Fort Washington in Manhattan in this lively rendering by the French-born sailor-artist Dominic Serres. Captured at sea in a previous war by the British, he elected to settle in England and became a leading marine artist, commissioned by British naval leaders to paint their ships and actions. Perhaps for dramatic effect, the river is drastically narrowed here, but the ships reflect a seamanly grasp ofwhat was going on. (&quot;Forcing the Hudson River Passage, Oct. 9, 1776, &quot;by Dominic Serres; Courtesy, US Naval Academy Museum)

n 16 November 1776, an overwhelming force of British and Hessian troops decisively defeated 3,000 Americans who had been ordered to hold the high ground on northern Manhattan Island &quot;as long as possible. &quot; Known as the battle of Fort Washington, this unequal contest takes its name from the fiveacre earthwork pentagon atop Mount Washington&#39;s southern approaches. The engagement marked the end of a determined American effort to keep control over the lower Hudson River during the Revolutionary War. As Britain and her American colonies moved ever closer to war in early 1775, New York&#39;s acting Royal Governor, Cadwallader Colden, counseled the British North American commanders- General Thomas Gage and Admiral Samuel Graves -about the Hudson&#39;s strategic importance. &quot;For upwards of one hundred miles&quot; above New York City, he wrote, &quot;there is not less SEA HISTORY 98, AUTUMN 200 I

than 24 feet of water in the channel of that river.&quot; In the age of sail, 24 feet could accommodate nearly every class of British warship, from lightly armed cutters and sloops up to 74-gun ships of the line. Governor Colden was convinced that a modest but timely investment of ships and troops would assure British control of the Hudson as far as Albany; as a result all inland communication between rebellious New England and the other colonies would be cutoff and the incipient rebellion snuffed out. Colden was also convinced that New York would remain loyal to the Crown-a fatal political misjudgment. In the wake of Lexington in April 1775 , the rebels took over most of New York State. Although the Americans fully appreciated the Hudson&#39;s strategic importance, they did not at first believe that a successful river defense could be mounted anywhere south of the Hudson Highlands, 50 miles north ofNew York City. For nearly a year,

they concentrated on constructing two fortifications. The first was Fort Constitution on the east bank opposite West Point near the northern end of the Highlands; the second was Fort Montgomery, on the west bank, nearly opposite Peekskill, at the southern entrance to the Highlands. The possibility of interdicting the Hudson River in the latitude of Manhattan was not seriously considered until]une 1776, a few weeks before the advance guard of the British invasion force arrived in New York. On 3 June, New York&#39;s Provincial Congress gave its tentative blessing to a proposal to sink obstructions across the harbor between Bedloe&#39;s Island (Liberty Island today) and Red Hook on the Brooklyn shore. This, however, was subject to the approval of General George Washington, who had his own ideas on the subject. Washington favored the high ground on northern Manhattan Island and on the Jersey Palisades. Heavy cannon at each location could com-