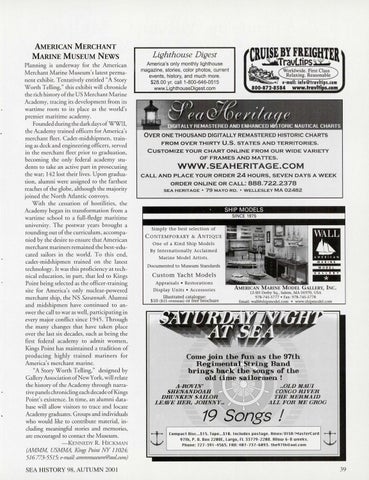 AMERICAN MERCHANT MARINE MUSEUM NEWS Planning is underway for the American Merchant Marine Museum&#39;s latest permanent exhibit. Tentatively entitled &quot;A Story Worth Telling, &quot; this exhibit will chronicle the rich history of the US Merchant Marine Academy, tracing its development from its wartime roots to its place as the world&#39;s premier maritime academy. Founded during the dark days of WWII, the Academy trained officers for America&#39;s merchant fleet. Cadet-midshipmen, training as deck and engineering officers, served in the merchant fleet prior to graduation, becoming the only federal academy students to take an active part in prosecuting the war; 142 lost their lives. Upon graduation, alumni were assigned to the farthest reaches of the globe, although the majoriry joined the North Atlantic convoys. With the cessation of hostilities, the Academy began its transformation from a wartime school to a full-fledge maritime universiry. The postwar years brought a rounding out of the curriculum, accompanied by the desire to ensure that American merchant mariners remained the best-educated sailors in the world. To this end, cadet-midshipmen trained on the latest technology. It was this proficiency at technical education, in part, that led to Kings Point being selected as the officer-training sire for America&#39;s only nuclear-powered merchant ship, the NS Savannah. Alumni and midshipmen have continued to answer the call to war as well, participating in every major conflict since 1945. Through rhe many changes that have taken place over the last six decades, such as being the first federal academy to admit women, Kings Point has maintained a tradition of producing highly trained mariners for America&#39;s merchant marine. &quot;A Sto1y Worth Telling,&quot; designed by Gallery Association ofN ew York, will relate the history of the Academy through narrative panels chronicling each decade ofKings Point&#39;s existence. In rime, an alumni database will allow visitors to trace and locate Academy graduates. Gro ups and individuals who would like to contribute material, including meaningful stories and memories, are encouraged to contact the Museum. -KENNEDY R. HIC KMAN (AMMM, USMMA, King; Point NY 11024;

OVER ONE THOUSAND DIGITALLY REMASTERED HISTORIC CHARTS FROM OVER THIRTY

CUSTOMIZE YOUR CHART ONLINE FROM OUR WIDE VARIETY OF FRAMES AND MATTES.

WWW.SEAHERITAGE.COM CALL AND PLACE YOUR ORDER

Simpl y the best selection of

.•OLD MAUI CONGO RIVER THE MERMAID ALL FOR ME GROG