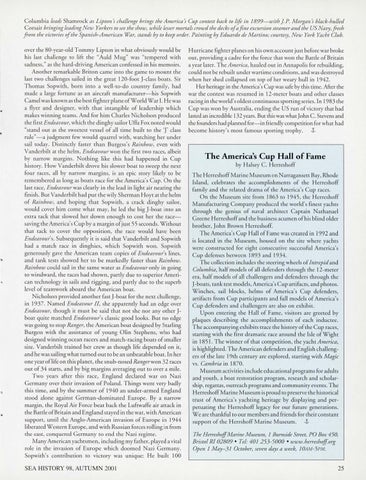 Columbia leads Shamrock as Lipton s challenge brings the Americas Cup contest back to life in 1899-with JP. Morgans black-hulled Corsair bringing leading New Yorkers to see the show, while lesser mortals crowd the decks ofa fine excursion steamer and the US Navy, fresh from the victories ofthe Spanish-American War, stands by to keep order. Painting by Eduardo de Martino; courtesy, New York Yacht Club. over the 80-year-old Tommy Lip to n in what obviously would be his last challenge to lift rhe &quot;Auld Mug&quot; was &quot;tempered with sadness,&quot; as th e hard-driving American co nfessed in his memoirs. Ano ther remarkable Bri to n came into rhe game to mount rhe last two challenges sailed in the great 120-foo r ]-class boars. Sir T homas Sopwith, born into a well-to-do country fami ly, had made a large fort une as an aircraft manufact urer- his Sopwith Cam el was known as the best figh ter plane of W orld War I. H e was a flyer and designer, with that intangible of leadership which makes wi nning teams. And fo r him Charles Nicholso n produced rhe first Endeavour, which the dinghy sailor Uffa Fox noted would &quot;stand our as rhe sweetest vessel of all rime built to the &#39;]&#39; class rule&quot;-a judgment few wo uld quarrel with, watching her under sail today. Distinctly fas ter than Burgess&#39;s Rainbow, even with Vanderbilt at the helm, Endeavour won the first two races, albeit by narrow margins. No thing like this had hap pened in Cup history. H ow Vanderbilt drove his slower boar to sweep the next fo ur races, all by narrow margins, is an epic story li kely to be remembered as long as boats race for rhe America&#39;s C up . O n the las t race, Endeavour was clearly in th e lead in light air nearing the finish. Bur Vanderbilt had put the wily Sherman H oyt at the helm of Rainbow, and hopi ng that Sopwith, a crack dinghy sailor, wo uld cover him come what m ay, he led the big ] -boat into an extra tack that slowed her down enough to cost her the racesaving the America&#39;s Cup by a m argin of just 55 seconds. W ithout that rack to cover the opposition, the race wo uld have been Endeavour&#39;s. Subsequently it is said that Vanderbilt and Sopwith had a march race in dinghies, wh ich Sopwith wo n. Sopwith generously gave the American team copi es of Endeavour&#39;s lines, and tank tests showed her to be markedly faste r than Rainbow. Rainbow could sail in the same wa ter as Endeavour only in going to windward, the races had shown, par tly due to superior American technology in sails and rigging, and partly due to the superb level of teamwo rk aboard th e A merican boat. N icholson provided another fas t ] -boat for the next challenge, in 1937. Named Endeavour II, she apparently had an edge over Endeavour, though it must be said that not she nor any other ] boat qui te matched Endeavour&#39;s classic good looks. But no edge was goi ng to stop Ranger, the A m erican boat designed by Starling Burgess with the assistance of yo ung O lin Stephens, who had designed winning ocean racers and match -racing boats of smaller size. Vanderbilt trained her crew as though life depended on it, and he was sailing what turned o ut to be an unbeatable boat. In her one yea r ofl ife on this planet, the snub-nosed Ranger wo n 32 races out of 34 starts, and by big margins averaging out to over a mile. Two years after this race, England declared war on Nazi Germany over their invasion of Poland. T hings went very badly this time, and by the summer of 1940 an under-armed England stood alone against German -d ominated Euro pe. By a narrow margin , the Royal Air Force beat back the Luftwaffe air attack in the Battle ofBritain and England stayed in the war, with American support, un til the Anglo-Am erican invasion of Europe in 1944 liberated Western Euro pe, and with Russian fo rces rolling in from the east, conquered German y to end the Nazi regime. Many American yach tsmen , includ ing my father, played a vital role in the invasion of Euro p e which doomed Nazi Germany. Sopwi th&#39;s contriburion to victo ry was unique: H e built 100 SEA HISTORY 98, AUTUMN 200 1

Hurricane fighter planes on his own acco unt just before war broke out, providing a cadre fo r the force that won the Battle of Britain a year later. T he America, hauled out in An napolis fo r rebuilding, could not be rebuilt under wartime co nditi ons, and was des troyed when her shed collapsed on top of her weary hull in 1942. H er heritage in the America&#39;s C up was safe by this time. After the war the contest was resumed in 12-mete r boats and other classes racing in the wo rld&#39;s oldes t co ntinuous sporting series. In 1983 th e Cup was wo n by Australia, ending th e US run of victory that had lasted an incredible 132 years. But this was what John C. Stevens and the fo unders had planned for- in friendly competition fo r what had become history&#39;s most fa mous sporting trophy. ,t

The America&#39;s Cup Hall of Fame by H alsey C. H erreshoff T he H erreshoff Marine Museum on Na rragansett Bay, Rhode Island, celebrates the acco mplishments of the H erresho ff family and the rel ated drama of the America&#39;s C up races. O n the M useum site from 1863 to 1945, the H erreshoff Manufac turing Company p roduced the wo rld&#39;s fi nes t yachts th ro ugh the genius of naval archi tect Captain Nathanael G ree ne H erreshoff and the business acumen of his blind older bro ther, John Brown H erreshoff. T he America&#39;s C up Hall of Fame was created in 1992 and is located in the M useum , housed on the site where yachts we re constructed fo r eight co nsecutive successful America&#39;s C up defe nses between 1893 and 1934. T he collection includes th e steering wheels of I ntrepid and Columbia, half models of all defenders th ro ugh the 12-meter era, half models of all challengers and defe nders th ro ugh the ]-boats, tank test models, Am erica&#39;s C up arti fac ts, and photos. W inches, sail blocks, helms of America&#39;s C up defenders, arti fac ts from C up parti cipants and full models of America&#39;s C up defenders and challengers are also on exhibit. U pon ente ring the H all of Fame, visito rs are greeted by plaques describing the acco m plishments of each inductee. T he accompanying exh ibits trace the history of the C up races, starting with the first dramatic race around the Isle of Wight in 185 1. T he winner of that competition, the yacht America, is highlighted. T he American defenders and English challengers of the late 19th century are explored, starting with Magic vs. Cambria in 1870. Museum activiti es include educational programs for adults and yo uth , a boat resto ration program , research and scholarship, regattas, outreach programs and community events. The H erresh off Marine Museum is proud to preserve the historical trust of Am erica&#39;s yachting heritage by displaying and perpetuating the H erreshoff legacy for our future generations. We are thankful to our members and fri ends for their constant support of the H errshoff M arine Museum. ,t The H erreshojfMarine M useum, 1 Burnside Street, PO Box 450, Bristol RI 02809 â&amp;#x20AC;˘ Tel: 4 01 253-5 000 â&amp;#x20AC;˘ www. herreshoff.org Open 1 May-3 1 October, seven days a week, 10AM-5PM.