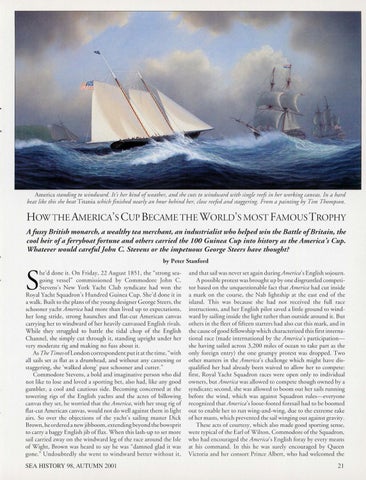 Ameri ca standing to windward. It&#39;s her kind of weather, and she cuts to windward with single reefs in her working canvas. In a hard beat like this she beat Titania which finished nearly an hour behind her, close reefed and staggering. From a painting by Tim Thompso n.

HOWTHEAMERICA&#39;S CUP BECAME THE WORLD&#39;S MOST FAMOUS TROPHY A fussy British monarch, a wealthy tea merchant, an industrialist who helped win the Battle ofBritain, the cool heir ofa ferryboat fortune and others carried the 100 Guinea Cup into history as the America&#39;s Cup. Whatever would careful john C. Stevens or the impetuous George Steers have thought? by Peter Stanford

he&#39;d done it. On Friday, 22 August 1851, the &quot;strong seago ing vessel&quot; co mmissioned by Commodore John C. Stevens&#39;s New Yo rk Yacht C lu b syndicate had wo n th e Royal Yacht Squadron&#39;s Hundred G uinea C up . She&#39;d done it in a walk. Built to the plans of the yo ung des igner George Steers, th e schooner yac ht America had more than lived up to expectatio ns, her long stride, strong haunches and flat-cut American canvas carrying her to windward of h er heavily canvassed English rivals. While they struggled to battle the tidal chop of the English C hannel, she simply cut through it, standing upright under her ve ry moderate rig and maki ng no fu ss abo ut it. As The Times ofLondon correspo ndent put it at the time, &quot;with all sails set as flat as a drumhead, and without any careening or staggering, she &#39;walked along&#39; past schooner and cutter.&quot; Commodore Stevens, a bold and imaginative person who did not like to lose and loved a sporting bet, also had, like any good gambler, a cool and cautious side. Becoming concerned at the towering rigs of the English yachts and the acres of billowin g canvas they set, he worried that the America, with her snug rig of flat-cut American canvas, wo uld not do well against them in light airs. So over the obj ections of the yacht&#39;s sailin g master Dick Brown, he ordered a new jibboom, extending beyond the bowsprit to carry a baggy English jib offlax. W hen this lash-up to set more sail carried away on the windward leg of the race aro und the Isle of Wight, Brown was heard to say he was &quot;damned glad it was go ne.&quot; U ndoubtedly she went to windward better witho ut it,

and that sail was never set again during America&#39;s English sojourn. A possible protest was brought up by one disgruntled competitor based on the unquestionab le fact that America had cut inside a mark on the co urse, the Nab lightship at the east end of the island. This was because she had not received the full race instructions, and her English pilot saved a little ground to windward by sailing inside the light rather than outside aro und it. But others in the fleet of fifteen starters had also cut this mark, and in the cause of good fellowship which characterized this first international race (made international by the America&#39;s parti cipationshe having sailed across 3,200 miles of ocean to take part as the only foreign entry) the one grumpy protest was dropped. Two other matters in the America&#39;s challenge which might have disqualified her had already been waived to allow her to compete: first, Royal Yacht Squadron races we re open only to individual owners, but America was allowed to compete though owned by a syndicate; second, she was allowed to boom out her sails running before the wind, which was against Squadron rules-everyone recognized that America&#39;s loose-footed foresail had to be boomed out to enable her to run wi ng-and-wing, due to th e extreme rake of her masts, which prevented the sail winging out against gravity. These ac ts of co urtesy, which also made good sporting sense, were typical of the Earl of Wilton, Commodore of the Squadron, who had encouraged the America&#39;s English foray by every means at his command. In th is he was surely encouraged by Q ueen Victoria and her consort Prince Albert, who had welcomed the 21