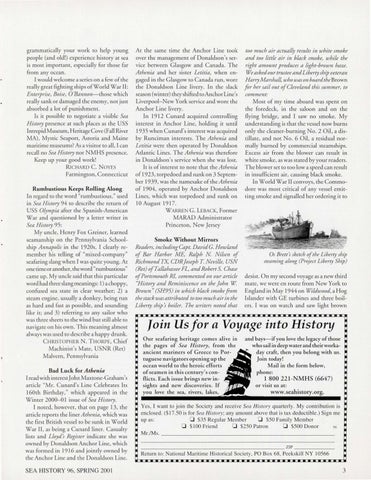 Bad Luck for Athenia I read with imeresrJohn Maxrone-Graham&#39;s arricle &quot;Mr. C unard&#39;s Line Celebrares Irs 160rh Birrhday,&quot; which appeared in rhe Winter 2000-0 1 issue of Sea History. I noted, however, that on page 13, the arricle reporrs the liner Athenia, which was the first British vessel robe sunk in World War II, as being a C unard liner. Casualty lisrs and Lloyd&#39;s Register indicate she was owned by Donaldson Anchor Line, which was formed in 1916 and jointly owned by the Anchor Line and the Donaldson Line. SEA HISTORY 96, SPRING 2001

At the same time the Anchor Line rook over the managemem of Donaldso n&#39;s service between G lasgow and Canada. The Athenia and her sister Letitia, when engaged in the G lasgow to Canada run, wore the Donaldson Line livery. In rhe slack season (winter) rheyshifted roAncho r Line&#39;s Liverpool-New Yo rk service and wore th e Anchor Line livery. In 19 12 C unard acquired co n trolling interest in Anchor Line, holding it until 1935 when C unard&#39;s interest was acquired by Runciman in rerests. T he Athenia and Letitia were then operated by Donaldson Atlantic Lines. The Athenia was rherefore in Donaldso n&#39;s service when she was losr. It is of interesr ro note that the Athenia ofl923, rorpedoedands unk on 3 Seprember 1939, was the namesake of th eAthenia of 1904, operared by Anchor Donaldson Lines, which was rorpedoed and sunk on 10 Augusr 19 17. WARREN G. LEBACK, Former MARAD Administraror Princero n, N ew Jersey Smoke Without Mirrors Readers, including Capt. David G. Ho wland of Bar Harbor ME, Ralph N Nilsen of Richmond TX, CDR]oseph T Neville, USN (Ret) of Tallahassee FL, and Robert S. Chase ofPo rtsmouth RI, commented on our article &quot;History and Reminiscence on the john W Brown&quot; (SH95) in which black smoke from the stack was attributed to too much air in the Liberty ship&#39;s boiler. The writers noted that

too much air actually results in white smoke and too little air in black smoke, while the right amount produces a light-brown haze. We asked our trustee and Liberty ship veteran H arry M arshall, who was on board the Brown far her sail out of Cleveland this summer, to comment: Most of my rime aboard was spent on the fo redeck, in the saloon and on the flying bridge, and I saw no smoke. My understanding is that the vessel now burns on ly the cleaner-burning No . 2 Oil, a distillate, and not No. 6 Oil, a residual normally burned by commercial steamships. Excess air from the blower can res ult in whire smoke, as was stated by your readers. T he blower set ro roo low a speed can result in insufficient air, causing black smoke. In World War II convoys, the Commodore was mosr crirical of any vessel emitring smoke and signalled her ordering it ro

desisr. On my seco nd voyage as a new third mate, we were en route from New York ro England in May 1944 on Wildwood, a H og Islander with GE turbines and three boilers. I was on wa rch and saw light brown

Join Us for a Voyage into History Our seafaring heritage comes alive in the pages of Sea History, from the ancient mariners of Greece to Portuguese navigators opening up the ocean world to the heroic efforts of seamen in this century&#39;s conflicts. Each issue brings new insights and new discoveries. If you love the sea, rivers, lakes,

and bays-if you love the legacy of those who sail in deep water and their workaday craft, then you belong with us. Join today! Mail in the form below, phone: