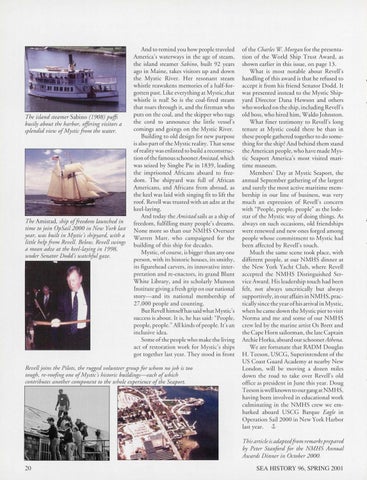 The island steamer Sabino (1 908) p uffs busily about the harbor, offering visitors a splendid view ofMystic from the water.

The Ami stad, ship offreedom launched in time to join OpSail 2 000 in New York last year, was built in Mystic's shipyard, with a little help from Revell. Below, Revell swings a mean adze at the keel-laying in 1998, under Senator D odd's watchful gaze.

And to remind you how peo ple traveled Am erica's wate1ways in the age of steam, the island steamer Sabino, built 92 years ago in M aine, takes visitors up and down the Mysti c Ri ver. Her resonant steam whistle reawakens m emories of a half-forgotten pas t. Like everything at M ys tic, that whistle is real! So is th e coa l-fir ed steam that roars through it, and the fireman who puts on the coal, and the skipper who tugs the cord to announce the little vessel's co min gs and goings on the M ys tic Rive r. Building to old design fo r new purpose is al so part of the M ys ti c reality. T hat sense of reality was enlisted to build a reconstructi on of the famous schoo nerA mistad, which was seized by Singbe Pie in 1839, leadin g the imprisoned Africans aboard to freedom. The shipyard was full of African Americans, and Afri cans from abroad , as the keel was laid with singin g fit to lift the roof. Revell was trusted with an adze at the keel-laying. And today the Amistad sails as a ship of freedo m, fulfillin g many peopl e's dreams. No ne more so than our N MHS O verseer Warren M arr, who campaigned for the building of this ship for decades. M ys tic, of co urse, is bigger than any on e person, with its histo ri c houses, its smithy, its fi gurehead carve rs, its innova tive interpretation and re-e nactors, its grand Blunt White Library, and its scholarly Munson Institute giving a fr esh grip o n our national story-and its natio nal membership of 27, 000 people and co unting. But Revell himselfh assaid what M ys tic's success is about. It is, he has said: "People, people, people." All kinds of people. It's an inclusive idea. Some of the peopl e who make the li ving ac t of restorati o n work for M ys tic's ships got together las t yea r. T hey stood in front

Revell joins the Pilots, the rugged volunteer group for whom no job is too tough, re-roofing one ofMystic's historic buildings-each of which contributes another component to the whole experience of the Seaport.

of the Charles W Morgan for the presentation of the Wo rld Ship Trust Award, as shown earli er in this issue, on page 13. W hat is most no table about Revell 's handling of this award is that he refused to accept it from his fri end Senator Dodd. It was presented instead to the Mystic Shipyard Director D ana H ewson and others who worked o n the ship , includin g Revell 's old boss, who hired him, Waldo Johnston. What fin er testimony to Revell's long tenure at Mysti c co uld there be th an in these people gath ered together to do so mething for th e ship ? And behind them stand the American peo ple, who have made M ystic Seapo rt America's most visited maritime museum. M embers' D ay at M ys tic Seaport, the annual September gathering of the largest and surely the most active maritim e membership in o ur line of business, was very much an expression of Revell's co ncern with "People, people, people" as the lodestar of the M ys tic way of do ing things. As always on such occasions, old fri endships were renewed and new ones forged among people whose commitment to M ys ti c h ad been affected by Revell's touch. Much the same scene took place, with different people, at our N MHS dinner at the New Yo rk Yacht Club, where Revell accepted the N MHS Distinguished Service Awa rd. His leadership touch had been felt , not always uncriti cally but always suppo rtively, in our affairs in N MHS, practi cally sin ce the year ofhi s arri val in M ys ti c, when he cam e down the M ys tic pier to visit No rm a and me and some of o ur N MHS crew led by the marine artist Os Brett and th e Cape H o rn sailorman , th e late Captain Archie H orka, aboard our schooner Athena. We are fortunate that RADM Douglas H . Teeso n, USCG, Superintendent of the U S Coas t G uard Academ y at nearby New Lo ndon, w ill be moving a dozen miles down the road to take over Revell's old offi ce as president in June this year. Doug T eeson is well known to our gang at N MHS, having been involved in educati onal work culminatin g in the NM H S crew we embarked aboard USCG Barque Eagle in Operation Sail 2000 in New Yo rk H arbor las t yea r. ,!, This article is adaptedfrom remarks prepared by Peter Stanford for the N MHS A nnual Awards Dinner in October 2 000.