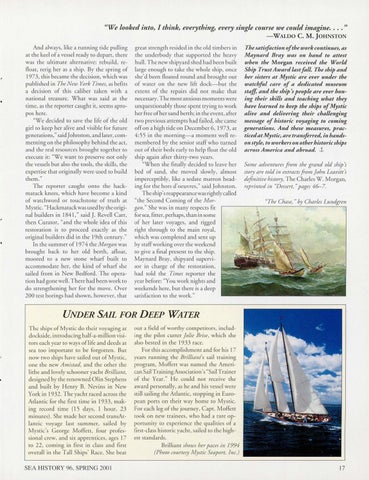 &quot;We looked into, I think, everything, every single course we could imagine. ... &quot; -WALDO

And always, like a running tide pulling at the keel of a vessel ready to depart, there was the ultimate alternative: rebuild, refloat, rerig her as a ship. By the spring of 1973, this became the decision , whi ch was published in The New York Times, as befits a decision of this caliber taken with a national treasure. What was said at the time, as the reporter caught it, seems apropos here. &quot;We decided to save the life of the old girl to keep her alive and visible for future generations,&quot; said Johnston, and later, commenting on the philosophy behind the act, and the real reso urces brou ght together to execute it: &quot;We want to preserve not only the vessels but also the tools, the skills, the expertise that originally were used to build them. &quot; The reporter caught onto the hackmatack knees, which have become a kind of watchword or touchstone of truth at Mystic. &quot;H ackmatack was used by the original builders in 1841 ,&quot; said J. Revell Carr, then Curator, &quot;and the whole idea of this restoration is to proceed exactly as the original builders did in the 19th century. &quot; In the summer of 197 4 the Morgan was brought back ro her old berth, afloat, moored to a new stone wharf built to accommodate her, rhe kind of wharf she sailed from in New Bedford. The operation had gone well. There had been work to do strengthening her for the move. Over 200 rest borings had shown, however, rhar

great strength resided in rhe old timbers in rhe underbody char supported th e heavy hull. The new shipyard shed had been built large enough to rake the whole ship, once she&#39;d been fl oared round and bro ugh r out of water on rhe new lift dock-bur the extent of rhe repairs did not make rhar necessary. The most anxious moments we re unquestionably those spent trying to work her free ofher sand berth; in the event, afte r two previous attempts had failed, she came off on a high ride on December 6, 1973, at 4:55 in rhe morning-a moment well remembered by the sen ior staff who turned our of their beds early to help fl oat the old ship again after thirty-two years. &quot;When she finally decided to leave her bed of sand, she moved slowly, almost imperceptibly, like a sedate matron heading for rhe hors d&#39; oeuvres,&quot; said Johnston. The ship&#39;s reappearance was rightly called &quot;rhe Second Com ing of the Morgan.&quot; She was in many respects fit for sea, fitter, perhaps, than in some of her later voyages, and rigged right through to the main royal, which was completed and sent up by staff working over rhe weekend to give a final present to rhe ship. Maynard Bray, shipyard supervisor in charge of the restoration, had told the Times reporter the yea r before: &quot;You work nights and weekends here, but there is a deep satisfaction to the work.&quot;

The satisfaction ofthe work continues, as Maynard Bray was on hand to attest when the Morgan received the World Ship Trust Award last fall. The ship and her sisters at Mystic are ever under the watchful care of a dedicated museum staff, and the ship&#39;s people are ever honing their skills and teaching what they have learned to keep the ships ofMystic alive and delivering their challenging message of historic voyaging to coming generations. And these measures, practiced at Mystic, are transferred, in handson style, to workers on other historic ships across America and abroad. 1. Some adventures from the grand old ships story are told in extracts from John Leavitts definitive history, The C harles W. Morgan, reprinted in &quot;Dessert,&quot; pages 46-7. &quot;The Chase, &quot;by Charles Lundgren

UNDER SAIL FOR DEEP WATER The ships of Mystic do their voyaging at dockside, introducin g half-a-million visitors each year to ways oflife and deeds at sea too important to be forgotten . But now two ships have sailed out of Mystic, one the new Amistad, and the other the lithe and lovely schooner yacht Brilliant, designed by the renowned Olin Step hens and built by Henry B. Nevins in New Yo rk in 1932. The yacht raced across the Atlantic for the first time in 1933, making record time (15 days, 1 hour, 23 minutes). She made her second rransArlantic voyage last summ er, sa il ed by Mystic&#39;s George Moffett, four professional crew, and six apprentices, ages 17 to 22, coming in first in class and first overall in the Tall Ships&#39; Race. She beat

out a field of worthy competitors, including the pilot cutter Jolie Brise, which she also bested in the 19 3 3 race. For this accompl ishment and for hi s 17 years running the Brilliant&#39;s sail training program, Moffett was named the American Sail TrainingAssociation &#39;s &quot;Sail T rainer of the Year. &quot; H e could not receive the award personally, as he and his vessel were still sailing the Atlantic, stopping in European ports on their way home to Mystic. For each leg of the journey, Capt. Moffett rook on new trainees, who had a rare opportunity to experience the qualities of a fi rst-class historic yacht, sailed to the highest standards. Brilliant shows her paces in 1994 (Photo courtesy Mystic Seaport, Inc.) 17