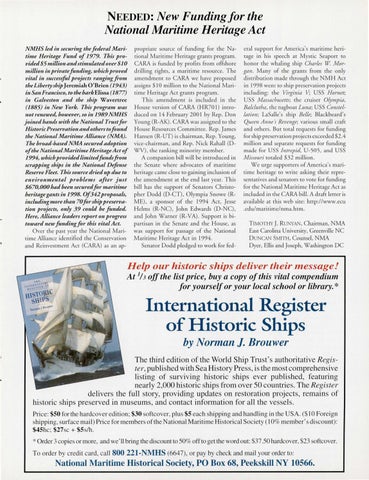 NEEDED: New Funding for the

National Maritime Heritage Act NMHS led in securing the federal Maritime Heritage Fund of 1979. This provided $5 million and stimulated over $10 million in private funding, which proved vital in successful projects ranging from the Liberty ship Jeremiah O &#39; Brien (1943) in San Francisco, to the bark Elissa (1877) in Galveston and the ship Wavertree (1885) in New York. This program was not renewed, however, so in 1989 NMHS joined hands with the National Trust for Historic Preservation and others to found the National Maritime Alliance (NMA). The broad-based NMA secured adoption ofthe National Maritime Heritage Act of 1994, which provided limitedfunds from scrapping ships in the National Defense Reserve Fleet. This source dried up due to environmental problems after just $670, 000 had been securedfor maritime heritage gants in 1998. Of342 proposals, including more than 70for ship preservation projects, only 39 could be funded. Here, Alliance leaders report on progress toward new funding/or this vital Act. Over the past year rhe Narional Maritime Alliance idemified the Co nservation and Rein vestment Acr (CARA) as an ap-

Help our historic ships deliver their message! At 1h off the list price, buy a copy of this vital compendium for yourself or your local school or library. *

International Register of Historic Ships by Norman J. Brouwer The third edition of the World Ship Trust&#39;s authoritative Register, published with Sea History Press, is the most comprehensive listing of surviving historic ships ever published, featuring nearly 2,000 historic ships from over 50 countries. The Register delivers the full story, providing updates on restoration projects, remains of historic ships preserved in museums, and contact information for all the vessels. Price: $50 fo r the hardcover edition; $30 softcover, plus $5 each shipping and handling in the USA . ($ 10 Foreign shipping, surface mail ) Pri ce for members of the National Maritime Historical Society (10 % member&#39;s discount): $45hc; $27sc + $5s/h . * Order 3 copies or more, and we&#39; ll bring the discount to 50% off to get the word out: $37 .50 hardcover, $23 softcover. To order by credit card, call