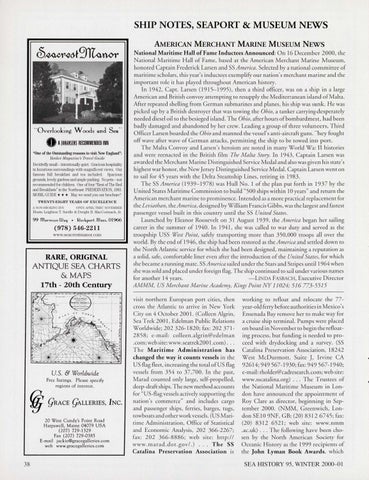 DecidecUy small - intentionally quiet. Gracious hospitality in luxurious swrnundings with magnificent views. Otufamous full breakfast and tea included. Spacious grotmds, lovely gardens and ample parking. No pets- not reconunended for children. One of fom &#39; Best of The Bed and Breakfasts&quot; in tl1e No1theast: PRESERVATION, 1983. MOBIL GUIDE * * * Âˇ May we send you owÂˇ brochme? TWENTY-EIGHT YEARS OF EXCELLENCE A NO N-St\IOK1NG INN

National Maritime Hall of Fame Inductees Announced: On 16 D ecember 2 000, the National Mari time Hall of Fame, based at the American M erchant Marine Museum , honored Captain Frederick Larsen and SS America. Selected by a national committee of maritime scholars, this year&#39;s inductees exemplify our nation&#39;s merchant marine and the imporranr role it has played throughout American history. In 1942, Capt. Larsen (1915-1995), then a third officer, was on a ship in a large American and British co nvoy attempting to resupply the Mediterranean island of Malta. After repeated shelling from German submarines and planes, his ship was sunk. H e was picked up by a British des troyer that was towing the Ohio, a tanker carrying d esperately needed diesel oil to the besieged island. T he Ohio, after hours ofbombardmen, h ad been badly damaged and abandoned by her crew. Leading a gro up of three volurreers, T hird Officer Larsen boarded the Ohio and manned the vessel&#39;s anti-aircraft guns. ~ hey fo ught off wave after wave of German attacks, permitting the ship to be rowed ino port. T he Malta Convoy and Larsen &#39;s heroism are noted in many World Wai II histories and we re reenacted in the British film The Malta Story. In 1943, Captain Larsen was awarded the Merchant Marine Distinguished Service Medal and also was given his state&#39;s highest war honor, the New ] ersey Distinguished Service Medal. Captain Larsen went on to sail for 45 years wi th the Delta Steamship Lines, retiring in 1983. The SS America (1939- 1978) was Hull No. 1 of the plan put forth in 1937 by the United States Maritime Commission to bui ld &quot;5 00 ships within 10 years&quot; and return the American merchant mari ne to prominence. Intend ed as a more practical replace ment for the Leviathan, the America, designed by W illiam Francis G ibbs, was the larges t and fastest passenger vessel built in this country unti l th e SS United States. Launched by Eleanor Roosevelt on 3 1 August 1939, the America began h er sailing career in the summer of 1940. In 194 1, she was called to war duty and served as the troopship USS West Point, safely transporting more than 350,000 troops all over the wo rld. By the end of 1946, the ship had been restored as the America and settled down to the No rth Atlantic service for which she had been designed, maintaining a rep utation as a solid, safe, comfortable liner even after the introduction of the United States, for which she became a running mate. SS America sailed under the Stars and Stripes until 1964 when she was sold and placed under foreign flag. The ship continued to sail under various names for another 14 yea rs. - LINDA FASBACH, Executive Director AMMM, US Merchant Marine Academy, Kings Point NY 1102 4; 5 16 173-5515 visit northern European port cities, then cross the Atlantic to arrive in New York C ity on 4 October 2001. (Colleen Algrin, Sea T rek 2001 , Edelman Public Relations Wo rldwide; 202 326-1820 ; fax: 202 3712858; e-m ail : co lleen.al grin @edelman .com ; web site:www.seauek200l. com) ... The Maritime Administration has changed the way it counts vessels in the US flag fl eet, in creasing the total of US flag vessels from 354 to 37,700. In the past, Marad counted only large, self-pro pelled, deep-draft ships. The new method acco unts for &quot;US-flag vessels actively supporting the nation &#39;s commerce&quot; and includes cargo and passenger ships, ferries, barges, rugs, rowboats and other wo rk vessels. (US Maritime Admin istration, Office of Statistical and Economic Analysis, 202 366-2267; fax: 202 366-8886; we b site: http :// www. marad.dot.gov/.) ... The SS Catalina Preservation Association is

worki ng to refloat and relocate the 77year-old ferry before autho rities in Mexico&#39;s Ensenada Bay remove her to make way for a cruise ship terminal. Pumps were placed on board in November to begin the refloating process, but fundin g is needed to proceed with drydocking and a survey. (SS Catalina Preservation Associatio n, 18242 West McDurmott, Suite J, Irvine CA 926 14; 949 567- 1930; fax: 949 567-1940; e-mail: rholder@cadresearch.com; web site: www.sscatalina.org) . .. The T rustees of the National Maritime Museum in London have announced the appoi ntment of Roy Clare as director, beginning in September 2000. (NMM, Greenwich, London SElO 9NF, GB; (20) 8312 6745; fax: (20) 8312 6521; we b site: www.nmm .ac. uk) . .. The following have b een chosen by the No rth American Society for Oceanic History as the 1999 recipients of the John Lyman Book Awards, which