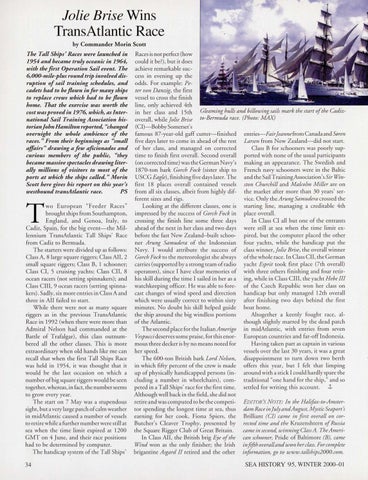 The Tall Ships' Races were launched in 1954 and became truly oceanic in 1964, with the first Operation Sail event. The 6, 000-mile-plus round trip involved disruption of sail training schedules, and cadets had to be flown in for many ships to replace crews which had to be flown home. That the exercise was worth the cost was proved in 1976, which, as International Sail Training Association historian john Hamilton reported, "changed overnight the whole ambience of the races." From their beginnings as "small affairs" drawing a few aficionados and curious members of the public, "they became massive spectacles drawing literally millions of visitors to most of the ports at which the ships called." Morin Scott here gives his report on this year's westbound transAtlantic race. PS

wo European "Feeder Races" brought ships from Southampton, England, and Genoa, Italy, to Cadiz, Spain, for the bi g event-the Millennium TransAtlantic Tall Ships' Race from Cadiz to Bermuda. The starters were divided up as fo llows: Class A, 8 large square riggers; C lass AJI, 2 small square riggers; C lass B, 1 schooner; Class C I, 5 cruising yachts; Class C II , 8 ocean racers (not setting spinnakers); and Class C III, 9 ocean racers (setting spinnakers). Sadly, six more entries in C lass A and three in AII fail ed to start. While there were nor as many square riggers as in the previous TransAtlantic Race in 1992 (when there were more than Admiral Nelson had commanded at the Barde of Trafalgar) , chis class oumumbered all the other classes. T his is more extrao rdinary when old hands like me can recall that when the first Tall Ships Race was held in 1954, ir was thought that it would be the last occasion on which a number of big square riggers would be seen together, whereas, in fact, the number seems to grow every year. The start on 7 May was a stupendous sight, bur a very large parch of calm weather in midAtlantic caused a number of vessels to retire while a further number were still at sea when the time limit expired at 1200 GMT on 4 June, and their race positions had to be determined by computer. The handicap system of the Tall Ships'

Racesis notperfect (how could it be?), but it does achieve remarkable success in evening up the odds. For example: Peter von Danzig, the first vessel to cross the finish line, only achieved 4th in her class and 15th Gleaming hulls and billowing sails mark the start ofthe Cadizoverall, while J olie Brise to-Bermuda race. (Photo: A1AX) (CI)-Bobby Somerset's famous 87-year-old gaff cutter-finished entries-FairJ eanne from Canada and Soren five days later to come in ahead of the rest Larsen from New Zealand-did not start. C lass B for schooners was poorly supof her class, and managed on corrected time to finish first overall. Second overall ported with none of the usual participants (on corrected time) was the German Navy's making an appearance. T he Swedish and 1870-ton bark Gorch Fock (sister ship to French navy schooners were in the Baltic USCG Eagle), finishing five days later. The and the Sail T raining Associarion' s Sir Winfirst 18 places overall contained vessels ston Churchill and M alcolm Miller are on from all six classes, albeit from highly dif- the market after more than 30 years' serferent sizes and rigs . vice. 0 nly rhe A rung Samudera crossed the Looking at the different classes, one is starting line, managing a creditable 4 th impressed by the success of Gorch Fock in place overall. In C lass C I all bur one of the entrants crossing the finish line some three days ahead of the next in her class and two days were still at sea when the rime limit exbefore the fas t New Zealand- built schoo- pired, but the computer placed the other ner Arung Samudera of the Indonesian four yachts, while rhe handicap put the Navy. I wo uld attribute the success of class w inner, J olie Brise, the overall winner Gorch Fock to the meteorologist she always of the whole race . In Class C II, the German carries (supported by a strong team of radio yacht Esprit took first place (7th overall) operators), since I have clear memories of with three ochers finishing and four retirhis skill during the time I sailed in her as a ing, while in Class C III , the yacht H ebe III watchkeeping officer. H e was able to fore- of the Czech Republic won her class on cast changes of wind speed and direction handicap but only managed 12th overall which were usually correct to within sixty afrer fin ishing two days behind the first minutes. No doubt his skill helped guide boat home. Altogether a keenly fo ught race, althe ship aro und the big windless portions though slightly marred by the dead parch of the Atlantic. The second place for the Italian Amerigo in midAtlantic, with entries from seven Vespucci deserves some praise, fo r this enor- European countries and far-off Indonesia. Having taken part as captain in various mous three decker is by no means noted for vessels over the las t 30 years, ir was a great her speed. T he 600-ton British bark Lord Nelson, disappointment to turn down two berth in which fifty percent of the crew is made offers this year, but I felt that limping up of physically handicapped persons (in- around with a stick I could hardly spare the cluding a number in wheelchairs), com- traditional "one hand for the ship," and so peted in a Tall Ships' race fo r the first time. settled for writing this acco unt. J, Although well back in the field, she did not retire and was computed to be the competi- ED!TOR's NOTE: I n the Halifax-to-Amstertor spending the longest time at sea, thus dam Race inJ uly andAugust, Mystic Seaports earning for her cook, Fiona Spiers, the Brilliant (CI) came in first overall on corButcher's Cleaver Trophy, presented by rected time and the Kruzenshtern of Russia came in second, winning Class A. The Amerithe Square Rigger C lub of G reat Britain. In C lass AJI, the British brig Eye ofthe can schooner, Pride of Baltimore (B), came Wind won as the only finisher; the Irish in fifth overall and won her class. For complete brigantine Asgard II retired and the other information, go to www.tallships2000. com.