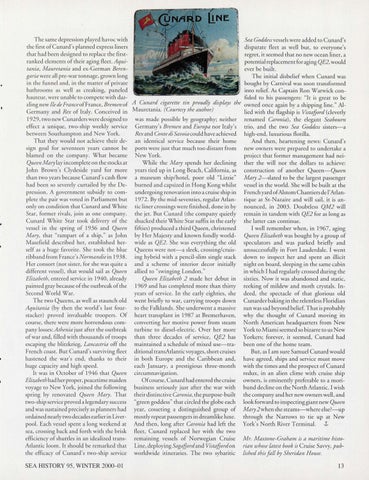 T he same depression played havoc with the first of C unard&#39;s planned express liners that had been designed to replace the fostranked elements of their aging fl eer. Aquitania, Mauretania and ex-German Berengaria we re all pre-war to nnage, grown long in the fu nnel and, in the matter of private bathrooms as well as creaking, paneled hauteur, we re unable to compete with dazzling new Ile de France ofF ranee, Bremen of A Cunard cigarette tin proudly displays the Ge rmany and Rex of Italy. Co nceived in M auretani a. (Courtesy the author) 1929, two new C unarders were des igned to was m ade possible by geography; neither effect a unique, two-ship weekly service Ge rmany&#39;s Bremen and Europa nor Italy&#39;s between So uthampton and New York. Rex and Conte di Savoia could have achieved T hat they wo uld not achieve their de- an identical service because their hom e sign goal fo r seventeen years cann ot be ports were just that much too distant from blamed on the company. What becam e New Yo rk. Queen Mary lay incomplete on the stocks at W hile the Mary spends her declining John Brown&#39;s Clydeside yard fo r more years tied up in Long Beach , C alifo rnia, as than two years because C unard&#39;s cash flow a museum ship/hotel, poor old &quot;Lizzie&quot; had been so severely curtailed by the D e- burned and capsized in H o ng Ko ng whilst pression. A government subsidy to com- undergoing renovatio n into a cruise ship in plete the pair was vo ted in Parliam ent bur 1972. By rhe m id-seventies, regular Atlanonly on condition that C un ard and White ticliner cross ings we re finished, done in by Star, fo rm er rivals, join as one co mpany. the jet. But C unard (rhe company qui etly C unard W hite Star too k delivery of the shucked their W hi te Star suffix in the earl y vessel in the spring of 1936 and Queen fi fties) produced a thi rd Queen, christened Mary, that &quot;rampart of a ship,&quot; as John by H er Majesty and kn own fo ndly wo rldMasefield described her, established her- wide as QE2. She was everything rhe old self as a huge favo rite. She took the blue Q ueens we re not-a sleek, crossing/cruisribband fr om France&#39;sNormandiein 1938. ing hybrid with a pencil-slim single stack H er consort (not sister, fo r she was quite a an d a schem e of interio r deco r initially different vessel), that wo uld sail as Queen allied to &quot;swinging Lo ndo n.&quot; Elizabeth, entered service in 1940, already Queen Elizabeth 2 m ade her debut in painted gray because of the outbreak of the 1969 and has completed m ore than thirty Second Wo rld War. years of service. In the earl y eighti es, she T he two Q ueens, as well as staunch old went briefly to war, carrying troops down Aquitania (by then the wo rld&#39;s las t fo ur- to the Falklands. She underwent a m assive stacker) proved invaluable troo pers. Of . heart transpl ant in 1987 at Brem erhaven, course, th ere were more horrendous co m- conve rting her m otive power from steam pany losses: Athenia just after the outbreak turbine to diesel-electri c. Over her m ore of war and, fill ed with tho usands of troops than three decades of service, QE2 has escaping the blitzkrieg, Lancastria off the m aintained a schedule of mixed use-traFrench coast. But C unard &#39;s surviving fleet ditional transAtlanticvoyages, sho rt cruises has tened the war&#39;s end, thanks to their in bo th Europe and rhe Caribbean and, each January, a prestigious three-m onth huge capacity and high speed . It was in October of 1946 that Queen circumnaviga tion . Elizabeth had her proper, peacetime maiden Ofcourse, C unard had entered the cruise voyage to New Yo rk, joined the fo llowing business seriously just after the war wi th sp ring by renovated Queen Mary. T hat their distinctive Caronia, the purpose-built two-ship service proved a legendary success &quot;green goddess&quot; that circled the globe each and was sustained precisely as planners had year, cosseting a distinguished group of o rdained nearly two decades earlier in Liver- m ostly repeat passengers in dream like luxe. pool. Each vessel spent a long weekend at And then , lo ng after Caronia had left the sea, crossing back and fo rth with the brisk fleet, C unard replaced her with rhe two efficiency of shu ttles in an idealized trans- remaini ng vessels of No rwegian C ruise Atlantic loo m. It should be rem arked that Line, deploying Saga.fjord and Vista.fjord on the efficacy of Cunard&#39;s two-s hip service wo rldwide itin eraries. The two sybaritic

Sea Goddess vessels were added to C unard &#39;s disparate fl eet as well but, to everyone&#39;s regret, it seem ed that no new ocean lin er, a potential replacement fo r aging QE2, would ever be built. T he initial disbelief when C unard was bought by Carnival was soon transform ed into relief. As Captain Ron Warw ick confid ed to his passengers: &quot;Ir is great to be owned once again by a shipping line.&quot; Allied with the flagship is Vista.fjord (cleverly renam ed Caronia), the elegant Seabourn trio, and the two Sea Goddess sisters- a high-end, luxurio us flotilla. And then, heartening news: C unard &#39;s new owners were prepared to undertake a project that form er m anagement had neither the will no r the dollars to achieve: co nstructi o n of ano ther Queen- Queen Mary 2-slated to be the largest passenger vessel in the world. She will be built at the French yard of Alstom Chantiers de l&#39;Atlanrique at Sr-Nazaire and will sail, it is announced, in 2003. D o ubtless QM2 will rem ain in tandem with QE2 for as long as the latter can co ntinue. I well rem ember when, in 1967, aging Queen Elizabeth was bought by a group of speculato rs and was parked briefl y and unsuccessfully in Fort Lauderdale. I we nt down to inspect her and spent an illicit night on board, sleeping in th e sam e cabin in whi ch I had regularly crossed during the sixties. Now it was abandoned and static, reeking of mildew and m oth crys tals. Indeed, the spectacle of that glo rio us old C unarder baking in the relentless Flo ridian sun was sad beyo nd belief. T hat is probably why the thought of C unard moving its No rth Ame rican headquarters from N ew Yo rk to M iami seem ed so bizarre to us New Yo rkers; forever, it seemed , C unard had been one of the home team . But, as I am sure Samuel C unard would have agreed, ships and service must move w ith the times and the prospect of C unard red ux, in an alien clime with cruise ship owners, is eminently preferable to a moribund decline on the No rth Atlanti c. I wish the company and her new owners well , and look fo rward to inspecting giant new Queen Mary 2when she steams-where else?-up th ro ugh the Narrows to tie up at New York&#39;s North River Terminal. ,!, Mr. Maxtone-Graham is a maritime historian whose latest book is C ruise Savvy, published this foll by Sheridan H ouse.