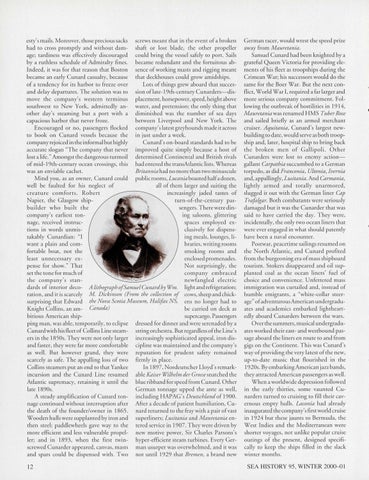 esty&#39; s mails. Moreover, those precious sacks screws mea nt that in the event of a broken had to cross promptly and without dam- shaft or lost blade, the other propeller age; tardiness was effectively disco uraged co uld bring the vessel safely to port. Sails by a ruthless schedule of Admiralty fines. became redundant and the fortuitou s abIndeed, it was for that reason that Boston sence of working masts and rigging meant became an early C unard casualty, because that deckhouses could grow amidships. Lots of things grew aboard that succesof a tendency for its harbor to freeze over and delay departures. The solution was to sion o flate- 19 th-cen tuty C unarders-dismove the company&#39;s western terminus p lacement, horsepower, speed, height above southwest to New York, admittedly an- water, and pretension; the only thing that other day&#39;s steaming bur a port with a diminished was th e number of sea days between Liverpool and New York. The capacious harbor that never froze. Encouraged or no , passe ngers flocked company&#39;s latest greyho unds made it across to book on Cunard vessels because the in just under a week. company rejoiced in the informal bur highly C unard&#39;s on-board standards had to be accurate slogan &quot;The company that never improved quire simply because a host of lost a life.&quot; Amongst the dangerous turmoil determined Co ntin ental and British rivals of mid-19th-century ocean crossings, this had entered the transAtlantic lists. Whereas was an enviable cacher. Britannia had no more than two minuscule Mind you, as an owner, C unard could public rooms, Lucania boasted half a dozen, all of them larger and suiting the wel l be faulted for his neglect of increasingly jaded tastes of creature comforts. Rob e rt Napier, the Glasgow shipturn -o f-the-century pasbui lder who bui lt the sengers. There were dining saloons, glittering company&#39;s earliest tonnage, received instrucspaces employed extions in words unmisclusively for dispensing meals, lounges, litakably Cunardian: &quot;I want a plain and combraries, writing rooms fortable boat, nor the smo king rooms and leas t unnecessary exenclosed promenades. pen se for show.&quot; Thar Not surprisingly, th e set th e tone form uch of co mpany embraced newfa ngled electr ic the company&#39;s standards of interior deco- A lithograph ofSamuel Cunard by Wm. light and refrigeration; ration, and it is scarcely M. Dickinson (From the collection of cows, sheep and chicksurprising that Edward the Nova Scotia Museum, Halifax NS, ens no longer had to Knight Collins, an am- Canada) be carried on deck as bitious American shipsupercargo. Passe ngers pin g man , was able, temporari ly, to eclipse dressed for dinner and were serenaded by a Cunard with his fleet of Collins Line steam- string orchestra. Bur regardless of the Line&#39;s ers in the 1850s. They were not only larger increasingly sophisticated appeal, iron disand faster, they were far more co mfortable cipline was maintained and the company&#39;s as wel l. But however grand, they were reputation for prudent safety remained scarcely as safe. The appalling loss of two firmly in place. Collins steamers put an end to that Yankee In 1897, No rdeutscher Lloyd&#39;s remarkincursion and the Cunard Line resumed able Kaiser Wilhelm der Grosse snatched the Atlantic supremacy, retaining it until the blue ribband for speed fro m C unard . Other German tonnage upped the ante as well, late 1890s. A steady amp lification of C un ard ton- including HAPAG &#39;s Deutsch/and of 1900. nage co ntinued without interruption after After a decade of patient humiliation, Cuthe dea th of the founder/owner in 1865. nard returned to the fray with a pair of vast Wooden hulls were supplanted by iron and superliners; Lusitania and Mauretania enthen steel; paddlewheels gave way to the tered service in 1907. They were driven by more efficient and less vulnerable propel- new motive powe r, Sir C harles Parsons&#39;s ler; and in 1893, when the first twin- hyper-efficient steam turbines. Every Gerscrewed Cunarder appeared, canvas, masts man usurper was oveiwhelmed, and it was and spars could be dispensed with. Two not until 1929 that Bremen, a brand new

German racer, would wrest the speed prize away from Mauretania. Samuel Cunard had been knighted bya grateful Queen Victoria for providing elements of his fleet as troopships during the Crimean War; his successors would do the same for the Boer War. But the next conflict , World War I, required afa r larger and more serious company commitment. Following the outbreak of hostiliti es in 1914, M auretania was renamed HMS Tuber Rose and sailed briefly as an armed merchant cruiser. Aquitania, Cunard&#39;s largest newbuilding to date, would serve as both troopship and, later, hospital ship to bring back the broken men of Gallipoli. Other C unarders were lost to enemy actiongallant Carpathia succumbed to a German torpedo, as did Franconia, Uftonia, Ivernia and, appall ingly, Lusitania. And Carmania, lightly armed and rorally un armored , slugged it out with the German liner Cap Trafalgar. Both combatants were seriously damaged bur it was the Cunarder that was said to have carried the day. They were, incidentally, the only two ocean lin ers that we re ever engaged in what should patently have been a naval encounter. Postwar, peacetime sailings resumed on the North Atlantic, and Cunard profited from th e burgeoning era of mass shipboard tourism. Stokers disappeared and oil supplanted coal as the ocean liners&#39; fu el of choice and convenience. Unfettered m ass immigration was curtai led and, instead of humble emi gra nts, a &quot;white-collar steerage&quot; ofadventurousAmerican undergraduates and academics embarked lightheartedly aboard C unarders between the wars. Over the summers, musical undergraduates worked th eir eas t- and westbound passage aboard th e liners en route to and from gigs on th e Co ntinent. This was C unard&#39;s way of providing the ve ry latest of the new, up-to-date music that flourished in the 1920s. By em bar king American jazz bands, they attracted American passengers as well. When a worldwide depression followed in the ea rl y thirties, some vaunted C unarders turned to cruising to fill their cavernous empty hulls. Laconia had already inaugurated the company&#39;s firstworldcrui se in 1924 bur these jaunts to Bermuda, the West Indi es and the Mediterranean were shorter voyages, not unlike popular cruise outings of the present, designed specifically to keep the ships filled in the slack winter month s.