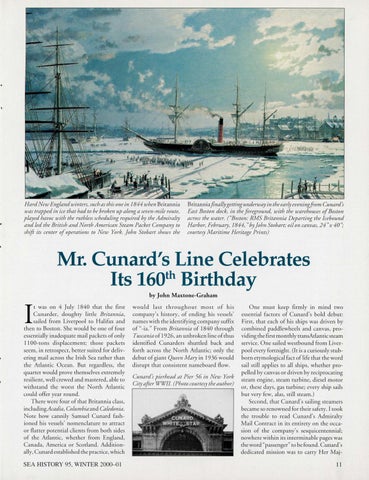 H ard New England winters, such as this one in 1844 when Brirannia was trapped in ice that had to be broken up along a seven-mile route, played havoc with the ruthless scheduling required by the Admiralty and led the British and North American Steam Packet Company to shift its center of operations to New York. john Stobart shows the

Mr. Cunard's Line Celebrates Its 16Qth Birthday by John Maxtone-Graham r was on 4 July 1840 rhat the first Cunarder, doughty littl e Britannia, sailed from Liverpool to Halifax and then to Boston. She would be on e of four essentially inadequate mail packets of only 1100-tons displacem ent; those packets seem, in retrospect, better suited for delivering mail across the Irish Sea rath er than the Atlantic Ocean . But regardless, the quartet would prove rhemselves exu emely resilient, well crewed and mastered, able to withstand the worst rh e North Atlantic could offer year round. T here were four of rhat Britannia class, includingAcadia, Columbia and Caledonia. Note how canni ly Samuel Cu nard fashioned his vessels' nomenclature to attract or flatter porential clienrs from borh sides of rhe Atlanric, whether from England, Canada, America or Scotland. Additionally, C unard established the practice, which

would las t throu ghout mo s t o f hi s company's history, of ending his vessels' names with the identifying company suffix of"-ia. " From Britannia of 1840 through Tuscania of 1926, an unbroken line of thus identified Cunarders shuttled back and forth across the North Atlantic; only the debut of gianr Queen Mary in 1936 wo uld disrupt that consistent nameboard flow. Cunard's pierhead at Pier 56 in New York City after WWI! (Photo courtesy the author)

One must keep firmly in mind rwo essential factors of C unard 's bold debur: First, that each of his ships was driven by combined paddlewheels and canvas, providing the first monthly transAtlan tic steam service. One sailed westbou nd from Liverpool every fortnight. (Ir is a curiously stubborn etymological fact of life that the word sail srill applies to all ships, whether propelled by canvas or driven by reciprocating steam engine, steam turbine, diesel motor or, these days, gas turbine; every ship sails but very few, alas, still steam.) Seco nd, that C unard's sailing steam ers became so renowned for their safety. I took the trouble to read Cunard's Admiralty M ail Contract in irs entirety on the occasion of the co mpany's sesquicenrennial; nowhere within its interminable pages was the wo rd "passenger" to be found. C unard's dedicated mission was to carry H er Maj -