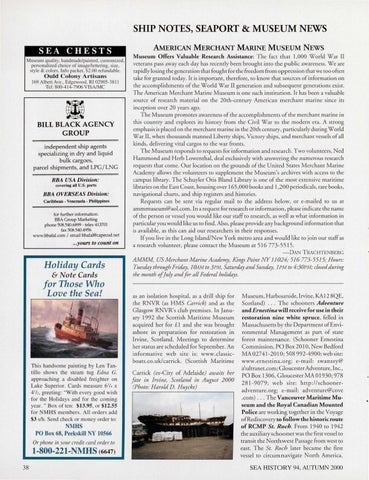 ...yours to count on

for Those Who Love the Sea!

AMERICAN MERCHANT MARINE M USEUM N EWS M useum Offers Valuable Research Assistance: The fact that 1,000 World War II veterans pass away each day has recently been brought into the public awareness. We are rapidly losing the generation that fought for the freedom from oppression that we too ofren take for gran ted today. It is important, therefore, to know that sources of information on the accomplishments of the World War II generation and subsequent generations exist. The American Merchant Marine Museum is one such institution. Ir has been a valuable source of research material on the 20th-century American merchant marine since its inception over 20 years ago. The Museum promotes awareness of the accomplishments of rhe merchant marine in this country and explores its history from the Civil War to rhe modern era. A strong emphasis is placed o n rhe merchant marine in rhe 20rh century, particularly during World War II, when thousands manned Liberty ships, Victory ships, and merchant vessels of all kinds, delivering vi ral cargos to rhe war fronts. The Museum responds to requests for information and research. Two volunteers, Ned Hammond and Herb Lowenthal, deal exclusively with answering the numerous research requests that come. Our location on the grounds of the United Stares M erchant Marine Academy allows the volunteers to supplement the Museum&#39;s archives with access to the campus library. The Schuyler Otis Bland Library is one of the most extensive maritime libraries on the East Coast, housing over 16 5 ,000 books and 1,200 periodicals, rare books, navigational charts, and ship registers and histories. Requests can be sent via regular mail to the address below, or e-mailed to us at ammmuseum@aol.com. In a request for research or information, please indicate the name of the person or vessel yo u would like our staff to research, as well as what information in particular yo u would like us to find. Also, please provide any background information that is available, as this can aid our researchers in their responses. If yo u live in rhe Long Island/New York metro area and would like to join our staff as a research volunteer, please contact the Museum at 516 773-55 15. -DAN TRACHTENBERG AMMM, US Merchant Marine Academy, Kings Point NY 11024; 516 173-5515; Hours: Tuesday through Friday, 1 OAM to 3PM, Saturday and Sunday, 1PM to 4:30PM; closed during the month ofJuly and for all Federal holidays.

as an isolation hospital, as a drill ship for the RNVR (as HMS Carrick) and as the Glasgow RNVR&#39;s club premises. In January 1992 the Scottish Maritime Museum acquired her for ÂŁ1 and she was bro ught ashore in preparation for restoration in Irvine, Scotland. Meetings to determine her status are scheduled for September. An informative web sire is: www.classicboats.co.uk/carrick. (Scottish Maritime Carrick (ex-City of Adelaide) awaits her fate in I rvine, Scotland in August 2000 (Photo: Harold D. Huycke)