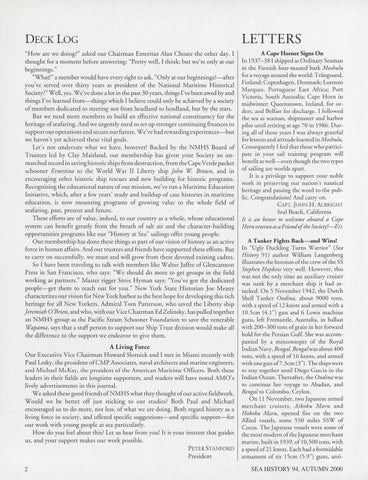 &quot;How are we doing?&quot; asked our Chairman Emeritus Alan Choate the other day. I thought for a moment before answering: &quot;Pretty well , I think; but we&#39;re only at our beginnings.&quot; &quot;What! &quot; a member would have every right to ask. &quot;Only at our beginnings?-after you&#39;ve served over thirty years as president of the National Maritime Historical Society?&quot; Well, yes. We&#39;ve done a lot in the past 30 years, things I&#39;ve been awed by and things I&#39;ve learned from-things which I believe could only be achieved by a society of members dedicated to steering not from headland to headland, but by the stars. But we need more members to build an effective national constituency for the heritage of seafaring. And we urgently need to set up stronger continuing finances to support our operations and secure our future. We&#39;ve had rewarding experiences-but we haven&#39;t yet achieved these vital goals. Let&#39;s not underrate what we have, however! Backed by the NMHS Board of Trustees led by Clay Maitland, our membership has given your Society an unmatched record in saving historic ships from destruction, from the Cape Verde packet schooner Ernestina to the World War II Liberty ship john W Brown, and in encouraging other historic ship rescues and new building for historic programs. Recognizing the educational nature of our mission, we&#39;ve run a Maritime Education Initiative, which, after a few years&#39; study and buildup of case histories in maritime education, is now mounting programs of growing value to the whole field of seafaring, past, present and future . These efforts are of value, indeed, to our country as a whole, whose educational system can benefit greatly from the breath of salt air and the character-building opportunities programs like our &quot;Histo ry at Sea&quot; sailings offer young people. Our membership has done these things as part of our vision of history as an active force in human affairs. And our trustees and friends have supported these efforts. But to carry on successfully, we must and will grow from these devoted existing cadres. So I have been traveling to talk with members like Walter Jaffee of Glencannon Press in San Francisco, who says: &quot;We should do more to get groups in the field working as partners.&quot; Master rigger Steve Hyman says: &quot;You&#39;ve got the dedicated people-get them to reach out for you.&quot; New York State Historian Joe Meany characterizes our vision for New York harbor as the best hope for developing this rich heritage for all New Yorkers. Admiral Tom Patterson, who saved the Liberty ship J eremiah O&#39;Brien, and who, with our Vice C hairman Ed Zelinsky, has pulled together an NMHS group as the Pacific Steam Schooner Foundation to save the venerable Wapama, says that a staff person to support our Ship Trust division would make all the difference to the support we endeavor to give them.

A Cape Horner Signs On In 193 7-38 I shipped as Ordinary Seaman in the Finnish four-masted bark Moshulu for a voyage aro und the world: T rangs und, Finland; Copenhagen, Denmark; Lorenzo Marques , Portuguese East Africa; Port Victoria, South Australia; Cape H orn in midwinter; Queenstown, Ireland, for orders, and Belfast for discharge. I followed the sea as seaman, shipmaster and harbor pilot until retiring at age 70 in 1986. During all of those years I was always grateful for lessons and attitude learned in Moshulu. Consequently I feel that those who participate in your sail training program will benefit as well-even though the two types of sailing are worlds apart. It is a privilege to support your noble work in preserving our nation &#39;s nautical heritage and passing the word to the public. Congratulations! And carry on. CAPT. J OHN H. ALBRIGHT Seal Beach, California It is an honor to welcome aboard a Cape Horn veteran as a Friend ofthe Society!-ED.

A Living Force Our Executive Vice C hairman Howard Slotnick and I met in Miami recently with Paul Lesky, the president ofCMP Associates, naval architects and marine engineers, and Michael McKay, the president of the American Maritime Officers. Both these leaders in their fields are longtime supporters, and readers will have noted AM O &#39;s lively advertisements in this journal. We asked these good friends of NMHS what they thought of our active fieldwork. Would we be better off just sticking to our studies? Both Paul and Michael encouraged us to do more, not less, of what we are doing. Both regard history as a living force in society, and offered specific suggestions-and specific support-fo r our work with yo ung people at sea particularly. How do yo u feel about this? Let us hear from you! It is your interest that guides us, and your support makes our work possible.

A Tanker Fights Back-and Wins! In &quot;Ugly Duckling Turns Warrior&quot; (Sea History 9 1) author William Langenberg illustrates the heroism of the crew of the SS Stephen Hopkins very well. However, this was not the only rime an auxiliary cruiser was sunk by a merchant ship it had attacked. On 5 November 1942, the Durch Shell Tanker Ondina, about 9000 tons, with a speed of 12 knots and armed with a 10.5cm (4.1&quot;) gun and 6 Lewis machine guns, left Fremanrle, Australia, in ballast with 200-300 tons of grain in her forward hold for the Persian G ulf. She was accompanied by a minesweeper of the Royal Indian Navy, Bengal. Bengal was about 400 tons, with a speed of 16 knots, and armed with one gun of7 .3cm (3&quot;). T he ships were to stay together until Diego Garcia in the Indian Ocean. T hereafter, the Ondinawas to continue her voyage to Abadan, and Bengal to Colombo, Ceylon. On 11 November, two Japanese armed merchant crui sers, Aikoku Maru and Hokoku Maru, opened fire on the two Allied vessels, some 550 miles SSW of Cocos. The Japanese vessels were some of the most modern of the Japanese merchant marine, built in 1939, ofl0,500 tons, with a speed of2 l knots. Each had a formidable armament of six 15cm (5.9&quot;) guns, anti-