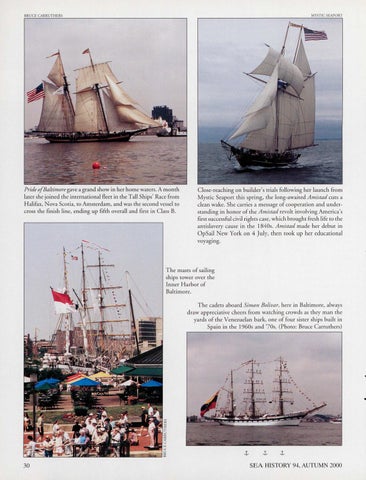 Pride ofBaltimore gave a grand show in her home waters. A month later she joined the international fleet in the Tall Ships&#39; Race from Halifax, Nova Scotia, to Amsterdam, and was the second vessel to cross the finish line, ending up fifth overall and first in Class B.

C lose-reaching on builder&#39;s trials fo llowing her launch from Mystic Seaport this spring, the long-awaited Amistad cuts a clean wake. She carries a message of cooperation and understanding in honor of the Amistad revolt involving America&#39;s first successful civil rights case, which brought fresh life to the antislavery cause in the 1840s. Amistad made her debut in OpSail New York on 4 July, then took up her educational voyaging .

: ~ The masts of sailing ships tower over the Inner H arbor of Baltimore. The cadets aboard Simon Bolivar, here in Baltimore, always draw appreciative cheers from watching crowds as they man the yards of the Venezuelan bark, one of four sister ships built in Spain in the 1960s and &#39;70s. (Photo: Bruce Carruthers)