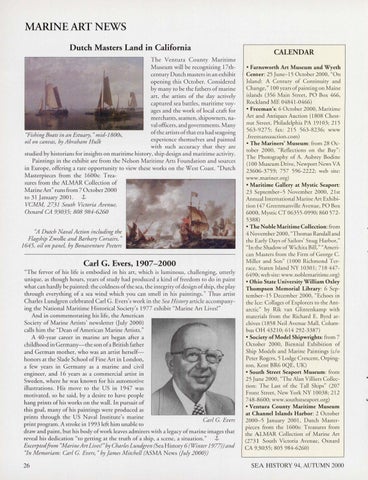 MARINE ART NEWS Dutch Masters Land in California The Ventura Cou nty Maritime Museum will be recognizing l 7 thcentury Durch masters in an exhibit opening this October. Considered by many to be the fathers of marine art, the artists of the day actively captured sea battles, maritime voyages and the work of local craft for merchants, seam en, shipowners, naval officers, and governments. Many of the artists of that era had seagoing &quot;Fishing Boats in an Estuary, &quot;mid-1800s, experience themselves and painted oil on canvas, by Abraham Hulk with such accuracy chat they are studied by historians for insights on maritime history, ship design and maritime activity. Paintings in the exhibit are from the Nelson Maritime Arts Foundation and sources in Europe, offering a rare opportunity to view these works on the West Coast. &quot;Durch Masterpieces from the 1600s: T reasures from the ALMAR Collection of Marine Art&quot; runs from 7 October 2000 to 31 January2001. ,t VCMM, 273 1 South Victoria Avenue, Oxnard CA 93035; 808 984-6260

&#39;/! Dutch Naval Action including the Flagship Zwolle and Barbary Corsairs,&quot; 1645, oil on panel, by Bonaventure Peeters

Carl G. Evers, 1907-2000 &quot;The fervor of his life is embodied in his art, which is luminous, challenging, utterly unique, as though hours, years of study had produced a kind of freedom to do in paint what can hardly be painted : the coldness of the sea, the integrity of design of ship, the play through everything of a sea wind which you can smell in his paintings.&quot; Thus artist Charles Lundgren celebrated Carl G. Evers&#39;s work in the Sea H istory article accompanying the National Maritime Historical Society&#39;s 1977 exhibit &quot;Marine Art Lives! &quot; And in commemorating his life, the American Society of Marine Artists&#39; newsletter 0 uly 2000) calls him the &quot;Dean of American Marine Artists.&quot; A 40-yea r career in marine art began after a childhood in Germany-the son of a British father and German mother, who was an artist herselfhonors at the Slade School of Fine Art in London, a few years in Germany as a marine and civi l engineer, and 16 years as a commercial artist in Sweden, where he was known for his automotive illustrations. His move to the US in 1947 was motivated, so he said, by a desire to have people hang prints of his wo rks on the wall. In pursuit of this goal, many of his paintings were produced as prints through the US Naval Insciture&#39;s marine Carl G. Evers print program. A stroke in 1993 left him unable to draw and paint, but his body of wo rk leaves admirers with a legacy of marine images that reveal his dedication &quot;to getting at the truth of a ship, a scene, a situation.&quot; ,t Excerptedfrom &quot;Marine Art Lives!&quot; by Charles Lundgren (Sea History 6 (Winter 1977)) and &#39;1n Memoriam: Carl G. Evers,&quot; by James Mitcheff (ASMA News (!ufy 2000))