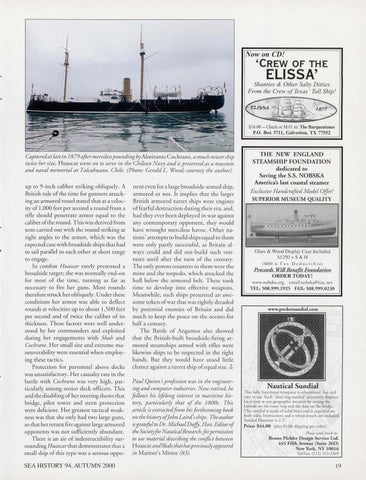 ELISSA&#39; Shanties &amp; Other Salty Ditties From the Crew of Texas&#39; Tall Ship!

Captured at last in 1879 after merciless pounding by Almiran re Cochrane, a much newer ship twice her size, Huascar went on to serve in the Chilean Navy and is preserved as a museum and naval memorial at Talcahuano, Chile. (Photo: Gerald L. Wood; courtesy the author) up to 9-inch caliber striking obliquely. A Brirish rule of the rime for gunners at tacking an armored vessel scared that at a velocity of 1,000 feet per second a round from a rifle should penetrate armor equal to the caliber of the round. Th is was derived from resrs carried out with rhe round striking at right angles to the armor, which was the expected case with broadside ships that had to sail parallel to each ocher at short range to engage. In com bat Huascar rarely presented a broadside targer; she was normall y end-on for most of rhe rime, turning as far as necessary to fire her guns . Mosr rounds rherefo re srruck her obliquely. Under rhese conditions her armor was ab le to deflect rounds ar velocities up to about 1,500 feet per seco nd and of rwice rhe caliber of irs rhickness . These factors were well understood by her commanders and exploited during her engagements with Shah and Cochrane. Her small size and extreme maneuverability were essential when employing these ractics. Protection for personnel above decks was unsarisfactory. H er casualty rate in the battle wirh Cochrane was very high, parricularly among senior deck officers. This and the disabling of her steering shows char bridge, pilot rower and srern prorecrion were deficient. Her greatest tactical weakness was char she only had rwo large guns, so that her return fire against large armored opponents was nor sufficiently abundanr. There is an air of indesrr ucribili ty surrounding H uascar rhar demonsrrates char a small ship of chis type was a serious oppoSEA HISTORY 94, AUTUMN 2000

nent even for a large broadside-armed ship, armored or nor. Ir implies that the large r Brirish armored turret ships were engines offearful desrrucrion during their era, and , had they ever been deployed in wa r against any contemporary opponent, they wo uld have wrought merciless havoc. Ocher nations&#39; attempts ro build ships equal to chem were only partly successful, as Britain always could and did our-build such ventures until after the turn of the century. T he only po rent counters to them were the mine and rhe rorpedo , which anacked rhe hull below rhe armored belr. These took rime ro develop inro effecrive weapons. Meanwhile, such ships presented an awesome roken of war rhat was ri ghtl y dreaded by potential enemies of Britain and did much to keep rhe peace on the oceans for half a century. The Bard e of Angamos also showed that rhe Brirish-built broadside-firin g armored steamships armed with rifles were likewise ships to be respected in the right hands. But rhey wo uld have srood little chance against a turret ship of equal size . .!

Paul Quinn s p rofession was in the engineering and computer industries. Now retired, he follows his lifelong interest in maritime history, particularly that of the 1800s. This article is extractedfrom his forthcoming book on the history ofjohn Lairds ships. The author is gratefal to Dr. Michael Dujfj, Hon. Editor of the Societyfor Nautical Research,for permission to use material describing the conflict between Huascar and Shah that haspreviously appeared in Mariner&#39;s Mirror (83).