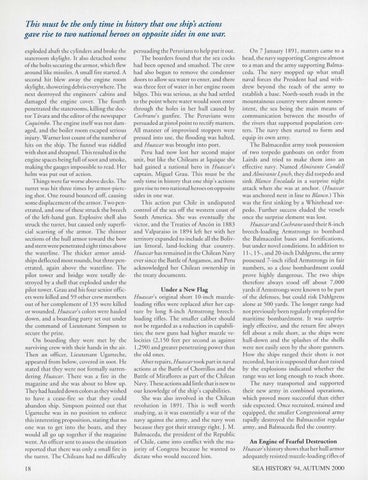 This must be the only time in history that one ship&#39;s actions gave rise to two national heroes on opposite sides in one war. exploded abaft the cylinders and broke the stateroom skylight. It also detached some of the bolts securing the armor, which flew around like missiles. A small fire started . A second hit blew away the engine room skylight, showering debris everywhere. The next destroyed the engineers&#39; cab ins and damaged the engine cover. The fourth penetrated the staterooms, killing the doctor Tavara and the editor of the newspaper Coquimbo. The engine itself was not damaged, and the boiler room escaped serious injury. Warner lost count of the number of hits on the ship. The funnel was riddled with shot and shrapnel. This resulted in the engine spaces being full of soot and smoke, making the ga uges impossible to read. Her helm was put out of action. Things were far wo rse above decks. The turret was hit three times by armor-piercing shot. One round bounced off, caus ing some displacement of the armor. Two penetrated, and one of these struck the breech of the left-hand gun. Explosive shell also struck the turret, but caused only superficial scarring of the armor. The thinner sections of the hull armor toward the bow and stern were penetrated eight times above the wa terline. The thicker armor am idships deflected most rounds, but three penetrated, again above the waterline. The pilot rower and bridge were totally destroyed by a shell that exploded under the pilot rower. Grau and his four senior officers were killed and 59 other crew members out of her complement of 135 were killed or wo unded. Huascar&#39;s colors were hauled down, and a boarding party set out under the command of Lieutenant Simpson to secure the prize. On boarding they were met by the surviving crew with their hands in the air. Then an officer, Lieutenant Ugarteche, appeared from below, covered in soot. He stated that they were not formally surrendering Huascar. T here was a fire in the magazine and she was about to blow up. They had hauled down colors as they wished to have a cease-fire so that they could abandon sh ip . Simpson pointed out that Ugarteche was in no position to enforce this interesting proposition, stating that no one was to get into the boats, and they would all go up together if the magazine went. An officer sent to assess the situation reported that there was only a small fire in the turret. T he Chileans had no difficulty 18

persuading the Peruvians to help put it out. The boarders found that the sea cocks had been opened and smashed. The crew had also begun to remove the condenser doors to allow sea water to enter, and there was three feet of water in her engine room bilges. This was serious, as she had settled to the point where water wo uld soo n enter through the holes in her hull caused by Cochrane&#39;s gunfire. The Peruvians were persuaded at pistol point to rectify matters. All manner of improvised stoppers were pressed into use, the flooding was halted, an d Huascar was brought into port. Peru had now lost her seco nd major unit, but like the Chileans at Iquique she had gained a national hero in Huascar&#39;s captain, Miguel Grau . This must be the only time in history that one ship&#39;s actions gave rise to two national heroes on opposite sides in one war. This action put C hile in undisputed control of the sea off the western coast of South America. She was eventually the victor, and the Treaties of An con in 1883 and Valparaiso in 1894 left her with her territory expanded to include all the Bolivian littoral, land-locking that country. Huascar has remained in the C hilean Navy ever since the Battle of Angamos, and Peru acknowledged her Chilean ownership in the treaty documents.

Under a New Flag Huascar&#39; s original short 10-inch muzzleloading rifles were replaced after her capture by long 8-inch Armstrong breechloading rifles. The smaller caliber should not be regarded as a reduction in capabilities; the new guns had high er muzzle velocities (2, 150 feet per second as against 1,290) and greater penetrating power than the old ones. After repairs, Huascar rook part in naval actions at the Battle of Chorrillos and the Battle of Miraflores as part of the Chilean Navy. These actions add little that is new to our knowledge of the ship&#39;s capabilities. She was also involved in the Chilean revolution in 1891. This is well worth studying, as it was essentially a war of the navy against the army, and the navy won because they got their strategy right.]. M. Balmaceda, the president of the Republic of Chile, came into conflict with the majority of Congress because he wanted to dictate who would succeed him.

On 7 January 1891, matters came to a head, the navy supporting Congress almost to a man and the army supporting Balmaceda. The navy mopped up what small naval forces the President had and withdrew beyond the reach of the army to establish a base. North-so uth roads in the mountainous country were almost nonexistent, the sea being the main means of commun ication between the mouths of the rivers that supported population centers. The navy then started to form and equip Its own army. The Balmacedist army rook possession of two torpedo gunboats on order from Lairds and tried to make them into an effective navy. Named Almirante Condell andAlmirante Lynch, they did torpedo and sink Blanco Encalada in a surprise night attack when she was at anchor. (Huascar was anchored next in line to Blanco.) This was the first sinking by a Whitehead torpedo. Further success eluded the vessels once the surprise element was lost. Huascarand Cochrane used their 8-inch breech-loading Armstrongs to bombard the Balmacedist bases and fortifications, but under novel conditions. In addition to 11-, 15-, and 20-inch Dahlgrens, the army possessed 7-inch rifled Armstrongs in fair numbers, so a close bombardment could prove highly dangerous. T he two ships therefore always stood off abo ut 7,000 yards if Armstrongs were known to be part of the defenses, but co uld risk Dahlgrens alone at 500 yards. The longer range had not previously been regularly employed for maritime bombardment. Ir was surprisingly effective, and the return fire always fe ll about a mile short, as the ships were hull-down and the splashes of the shells were not easily seen by the sho re gunners. How the ships ranged their shots is not recorded, but it is supposed that dust raised by the explosions indicated whether the range was set long eno ugh to reach shore. The navy transported and supported their new army in combined operations, which proved m ore successful than either side expected. Once recruited, trained and equipped, the smaller Congressional army rapidly destroyed the Balmacedist regular army, and Balmaceda fled the country.