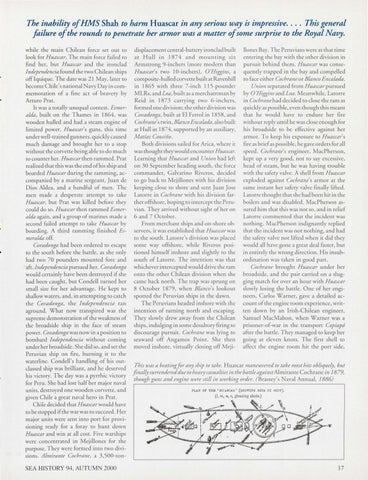 The inability ofHMS Shah to hmm Huascar in any serious way is impressive. ... This general failure of the rounds to penetrate her armor was a matter ofsome surprise to the Royal Navy. wh ile rh e main C hilean force ser our ro look for H uascar. The main force fai led ro find her, but H uascar and the ironclad Indep endencia found the two Chilean ships off Iquique. The date was 21 May, later ro become C hile&#39;s national Navy Day in commemoration of a fin e act of bravery by Arturo Prat. It was a totally unequal con test. Esmeralda, built on the Thames in 1864, was wooden hulled and had a steam engine of limited power. Huascar&#39;s guns, this tim e underwell -trained gunners, quickly caused much damage and brought her to a stop without the co rvette being able to do much to co unter her. Huascart hen ramm ed. Prat reali zed that this was the end of his ship an d boarded Huascar during the ramming, accompani ed by a marine sergeant, Juan de Dios Aldea, and a handful of men. The men made a desperate attempt to take Huascar, but Prat was killed before they could do so. Huascar th en rammed Esmeralda again, and a group of marines made a seco nd fai led attempt to take H uascar by boarding. A th ird ramming fini shed Esmeralda off. Covadonga had been ordered to escape to the south before the battle, as she o nl y had two 70 pounders mounted fore and aft. Independencia pursued her. Covadonga wo uld certainly have been destroyed if she had been caught, but Condell turned her small size for her advantage. H e kept to shallow waters, and, in attempting to catch the Covadonga, the I ndependencia ran aground . What now transpired was the supreme demonstration of the weakness of the broadside ship in the face of stea m power. Covadongawas now in a position to bombard Independencia without co min g under her broadside. She did so, and set the Peruvian sh ip on fire, burning it to the waterline. Condell &#39;s handling of his outclassed sh ip was brilliant, and he deserved his victo ry. T he day was a pyrrhi c victo ry for Peru. She had lost half her major naval units, destroyed one wooden co rvette, and given C hile a great naval hero in Prat. C hile decid ed that H uascar would have to be stopped ifthewarwas to succeed . H er major units were sent into port for provi sioning ready for a fo ray to hunt down Huascar and win at all cost. Five warships were concentrated in Mejil lones for the purpose. They were formed into two divisions. Almirante Cochrane, a 3,500-to n-

displacement central-battery ironclad b uilt at Hull in 18 7 4 and mounting six Armstrong 9-inchers (more modern than Huascar&#39;s two l 0-inchers) , O&#39;Higgins, a composite-hulled corvette built at Rave n hill in 1865 wirh rhree 7-inch 115-pounder MLRs, an d Loa, built as a merchantman by Reid in 1873 carrying two 6-inchers, formed one division; the other division was Covadonga, built ar El Ferro! in 1858, and Cochrane&#39; s twin, Blanco Encafada, also built at Hull in 1874, supported by an auxiliary, Matias Cousino. Both di visions sai led for Arica, where it was thought they would encounter Huascar. Learn ing that Huascar and Union had left on 30 September head in g south , the force commander, Galvarino Riveros, decided to go back to Mejillones wirh his division keeping close to shore and sent Juan Jose Latorre in Cochrane with his division fartheroffshore, hoping to intercepr the Peruvian. They arrived wirhour sighr of her on 6 and 7 October. From merchant ships and on-sho re observe rs, it was es ta bl ished rhar Huascar was to the so uth . Latorre&#39;s division was placed some way offshore, whi le Riveros posirioned himself inshore and slightl y to the so uth of Latorre. The intention was that w hichever intercepred would drive the ram onto the ocher Chi lean division when she came back north. The rrap was sprung on 8 October 1879, when Bianco&#39;s lookout spotted the Peruvian ships in the dawn. The Peruvians headed inshore wirh rhe intention of rurnin g north and escaping. They slowly drew away from rhe C hilean ships, indulging in some desultory firing to discourage pursuit. Cochrane was lying to seaward off Angamos Point. She rhen moved insho re, virtually closing off Meji-

llones Bay. The Peruvians were ar that ti me entering the bay with the other division in pursuit behind them. Huascar was co nsequently trapped in the bay and compelled to Face either Cochrane or Blanco Encalada. Union separated from H uascar pursued by O&#39;Higgins and Loa. Meanwhile, Latorre in Cochrane had decided to close rhe ram as quickly as possible, even though this m eant that he would have to endure her fire wirhout rep ly until he was close enough for his broadside to be effective aga inst her armor. To keep his exposure to Huascar&#39;s fire as brief as possible, he gave orders for all speed. Cochrane&#39;s engin eer, MacPherson, kept up a very good, not to say excess ive, head of steam, but he was hav ing trouble with the safety valve. A shell from Huascar exploded against Cochrane&#39;s armor at the same instant her safety valve finally lifted. Latorre thoughr that she had been hit in rhe boilers and was disabled. MacPherson assured him that chis was not so, and in relief Latorre commented thar the incid ent was norhing. MacPherson indi gnanrl y rep li ed rhar rhe incident was nor norhing, and had rhe safety valve nor lifted when it did they wou ld all have gone a great deal fasrer, but in entirely the wrong direcrion. His insubordination was taken in good part. Cochrane broughr Huascar under her broadside, and the pair carried o n a slugging match for over an hour wirh Huascar slowly losing the battle. One of her engineers, Carlos Warner, gave a detailed acco unt of the engine room experience, written down by an Irish-C hilean engi neer, Samuel MacMahon, when Warner was a prisoner-of-war in the transport Copiap6 after rhe barrle. They managed to keep her going ar eleven knors. The first shell to affect the engine room hit the port side,

This was a beating/or any ship to take. Huascar maneuvered to take most hits obliquely, but finally surrendered due to heavy casualties in the battle against Alm i ran te Cochrane in 1879, though guns and engine were still in working order. (Brassey&#39;s Naval Annual, 1886) rLA~ OF THE