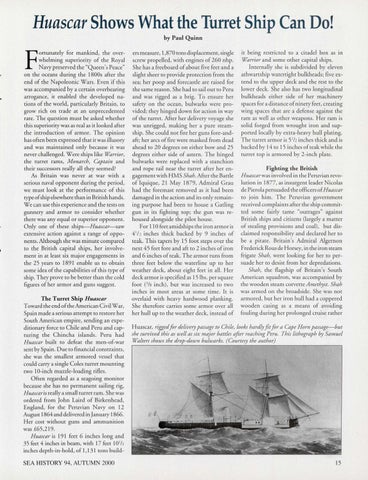 Huascar Shows What the Turret Ship Can Do! by Paul Quinn ortunately for mankind, the overwhelming superiority of the Royal Navy preserved the &quot;Queen&#39;s Peace&quot; on the oceans during rhe 1800s after the end of the Napoleonic Wars. Even if this was accompanied by a certain overbearing arrogance, it enabled the developed nations of the world, particularly Britain, to grow rich on trade at an unprecedented rare. The question must be asked whether this superiority was as real as it looked after the introduction of armor. The opinion has often been expressed rhar it was illusory and was maintained only because it was never challenged. Were ships like Warrior, the turret rams, Monarch, Captain and their successors really all they seemed? As Britain was never at war with a serious naval opponent during the period, we must look at the performance of this type ofship elsewhere than in British hands. We can use this experience and rhe rests on gunnery and armor to consider whether there was any equal or superior opponent. Only one of these ships-Huascar-saw extensive action against a range of opponents. Although she was minute compared to the British capital ships, her involvement in at least six major engagements in the 25 years to 1891 enable us to obtain some idea of the capabilities of this type of ship. They prove to be better than the cold figures of her armor and guns suggest.

The Turret Ship Huascar Toward the end of the American Civil War, Spain made a serious attempt to restore her South American empire, sending an expeditionary force to Chile and Peru and capturing the Chincha islands. Peru had Huascar built to defeat the men-of-war sent by Spain. Due to financial constraints, she was the smallest armored vessel that could carry a single Coles turret mounting rwo 10-inch muzzle-loading rifles. Often regarded as a seagoing monitor because she has no permanent sailing rig, Huascar is really a small turret ram. She was ordered from John Laird of Birkenhead, England, for the Peruvian Navy on 12 August 1864 and delivered in] anuary 1866. Her cost without guns and ammunition was ÂŁ65,219. Huascar is 191 feet 6 inches long and 35 feet 4 inches in beam, with 17 feet lO&#39;h inches depth-in-hold, of 1, 131 tons buildSEA HISTORY 94, AUTUMN 2000

ers measure, 1,870 tons displacement, single screw propelled, with engines of260 nhp . She has a freeboard of about five feet and a slight sheer to provide protection from the sea; her poop and forecastle are raised for the same reason. She had to sail out to Peru and was rigged as a brig. To ensure her safety on the ocean, bulwarks were provided; they hinged down for action in way of the turret. After her delivery voyage she was unrigged, making her a pure steamship. She could not fire her guns fore-andaft; her arcs of fire were masked from dead ahead to 20 degrees on either bow and 25 degrees either side of astern. The hinged bulwarks were replaced with a stanchion and rope rail near rhe turret after her engagementwith HMS Shah. After rhe Barde ofiquique, 21May1879, Admiral Grau had rhe foremast removed as it had been damaged in the action and irs only remaining purpose had been to house a Gatling gun in its fighting top; the gun was rehoused alongside the pilot house. For 110 feet amidships the iron armor is 4 1I 2 inches thick backed by 9 inches of teak. T his tapers by 15 foot steps over the next 45 feet fore and aft to 2 inches of iron and 6 inches of teak. The armor runs from three feet below the waterline up to her weather deck, about eight feet in all. Her deck armor is specified as 15 lbs. per square foot (3/s inch), bur was increased to rwo inches in most areas at some time. It is overlaid with heavy hardwood planking. She therefore carries some armor over all her hull up to the weather deck, instead of

it being restricted to a citadel box as in Warrior and some other capital ships. Internally she is subdivided by eleven athwartship watertight bulkheads; five extend to the upper deck and the rest to the lower deck. She also has rwo longitudinal bulkheads either side of her machinery spaces for a distance of ninety feet, creating wing spaces that are a defense against the ram as well as other weapons. Her ram is solid forged from wrought iron and supported locally by extra-heavy hull plating. The turret armor is 5 1h inches thick and is backed by 14 to 15 inches of teak while the turret top is armored by 2-inch plate.

Fighting the British Huascarwas involved in the Peruvian revolution in 1877, as insurgent leader Nicolas de Pierola persuaded the officers ofHuascar to join him. The Peruvian government received complaints after the ship committed some fairly tame &quot;outrages&quot; against British ships and citizens (largely a matter of stealing provisions and coal), but disclaimed responsibility and declared her to be a pirate. Britain&#39;s Admiral Algernon Frederick Rous de Horsey, in the iron steam frigate Shah, went looking for her to persuade her to desist from her depredations. Shah, the flagship of Britain&#39;s South American squadron, was accompanied by the wooden steam corvette Amethyst. Shah was armed on the broadside. She was not armored, but her iron hull had a coppered wooden casing as a means of avoiding fouling during her prolonged cruise rather

Huascar, rigged for delivery passage to Chile, Looks hardly fit for a Cape Horn passage-but she survived this as weLL as six major battles after reaching Peru. This Lithograph by Samuel Walters shows the drop-down bulwarks. (Courtesy the author)