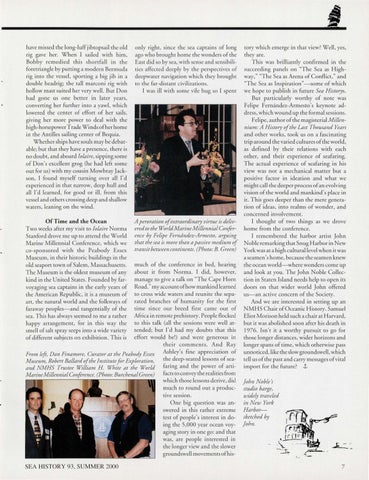 have missed the long-luff jib topsail the old rig gave her. W hen I sailed with hi m, Bobby remedi ed this sho rtfa ll in the foretri angle by putting a modern Bermuda rig into the vessel, sporting a big jib in a double headrig; the tall marco ni rig with hollow mas t suited her very well. But D on had gone us one better in later years, conve rting her furthe r in to a yawl, which lowered the center of effort of her sails, giving her more power to deal with the high-horsepower T rade W inds of her home in the An tilles sailing center of Bequi a. W heth er ships have so uls may be debatable; bur char they have a presence, th ere is no doubt, and aboard Iolaire, sipping some of Don's excellent grog (he had left so me our fo r us) with my cousin Mowbray Jackso n, I fo und myself turning over all I'd experienced in char narrow, deep hull and all I'd learned, for good or ill, fro m chis vessel and others crossing deep and shallow waters, leanin g on the wind.

only right, since rhe sea captains of long ago who brought home the wo nders of the East did so by sea, wirh sense and sensibilities affected deeply by the perspectives of deepwarer navigation whi ch they bro ught to the fa r-distant civilizations. I was ill wirh some vile bug so I spent

Of Time and the Ocean T wo weeks after my visit to Iolaire Norma Sta nfo rd drove me up to attend rhe Wo rld Marine Millennial Conference, whi ch we co-sponsored with th e Peabody Essex M useum, in their historic buildin gs in the old seaport town of Salem , M assa ch userrs. T he Museum is the oldest museum of any kind in th e U nited Stares. Founded by fa rvoyaging sea captains in the early years of rhe American Republic, it is a museum of art, rhe natural world and the folkways of faraway peo pl es-and tangentially of rhe sea. T his has always seemed to me a rather happy arrangement, fo r in this way the smell of salt spray seeps into a wide variety of di ffe rent subj ects on exhibition . T his is

A peroration ofextraordinary virtue is delivered to the World Marine Millennial Conference by Felipe Fernandez-Armesto, arguing that the sea is more than a passive medium of transit between continents. (Photo: B. Green)

much of the co nference in bed, hearing about it from No rma. I did, however, manage to give a talk on "T he Cape H orn Road," myacco unt ofhow mankind learned to cross wide waters and re unite the separated branches of human ity fo r rhe first rime since our breed first cam e our of Afri ca in remote prehi story. People flocked to this talk (all the sessions were well attended; bur I'd had my doubts that this effort would be!) and we re generous in th eir co mm ents. And Ray As hley's fin e apprecia tion of From Left, Dan Finamore, Curator at the Peabody Essex rhe deep-seared lessons of seaMuseum, Robert Ballard ofthe Institute for Exploration, fa ring and rhe power of artiand NMHS Trustee William H. White at the World facts to convey the realities from Marine Millennial Conference. (Photo: Burchenal Green) whi ch those lesso ns derive, did much to round our a productive sess ion. One big ques tion was answered in this rather extreme test of people's interest in doing the 5,000 year ocean voyaging story in one go: and that was, are people interested in the lo nger view and the slower gro undswell movements of hisSEA HISTORY 93 , SUMMER 2000

tory whi ch emerge in that view? Well, yes, they are. T his was brilliantly confirmed in the succeed ing panels on "The Sea as Highway," "The Sea as Arena of Conflict," and "The Sea as Inspiration"-some of which we hope to publish in future Sea H istorys. Bur particularly worthy of note was Felipe Fernfo dez-Armesto's keynote address, which wo und up the formal sessions. Felipe, aurhor of the magisterial Millennium: A H istory ofthe Last Thousand Years and other works, took us on a fasc inating trip around the va ried cultures of th e world, as defin ed by their relations with each other, and their experience of seafaring. The actual experience of seafarin g in his view was nor a mechanical matter but a pos itive facto r in ideation and what we might call the deeper process of an evolving vision of the wo rld and mankind's place in it. This goes deeper than rhe mere generation of ideas, into realms of wonder, and concerned involvement. I thought of two things as we d rove home fro m the conference. I remembered the harbor artist John No ble remarking that Snug H arbor in New Yo rk wasat a high cultural level when ir was a seamen's home, because the seamen kn ew rhe ocean wo rld-where wonders come up and look at yo u. T he John N obl e Co llection in Sraren Island needs help to open its doors on ch ar wider world John offered us-an active concern of the Society. An d we are interested in setting up an N MHS Chair of O ceani c History. Samuel Eliot Mo riso n held such a chair at Harvard , bur it was abolished soon after his death in 1976 . Isn' t it a wo rthy pursuit to go fo r those longer distances, wider horizons and longer spans of time, whi ch otherwise pass unnoti ced, like the slow groundswell, which rel! us of the pas t and carry messages of viral import fo r rhe future? ,t j ohn No ble's studio barge, widely traveled in New York H arborsketched by J ohn.