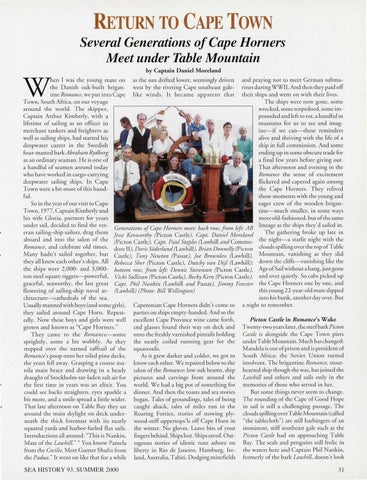 en I was the yo ung mate on as the sun drifred lower, seemingly driven and praying not to meet German submahe Danish oak-built brigan- west by the riveting Cape so utheast gale- rin es during WWII.And then they paid off ine Romance, we put into Cape like winds. Ir became appa rent that their ships and we nt on with their lives. T he ships were now gone, some Town, South Africa, on our voyage wrecked, so me torpedoed, some imaro und the wo rld. T he skipper, pounded and left ro rot, a handful in Captain Arthur Kimberly, with a lifetim e of sailing as an officer in museums for us ro see and imagin e-if we can- these reminders merchant rankers and freighters as alive and thriving with the life of a well as sailing ships, had started his ship in full co mmission . And some deepwarer ca reer in the Swedish ending up in some obscure trade for four-masted bark Abraham Rydberg as an ordinary seaman. H e is one of a fin al few yea rs befo re giving our. a handful of seamen around today T har afte rnoo n and evening in the Romance the sense of excitement who have worked in cargo-carrying deepwarer sailing ships. In Cap e flickered and capered again among Town were a bit more of this handthe Cape Homers. They relived those moments with the yo ung and ful. eager crew of the wooden briganSo in rheyear ofourvisir ro Cape tine-much smaller, in some ways Town, 1977, Captain Kimberly and more old-fashioned, bur of the same his wife G loria, partners for years lineage as the ships they'd sa iled in . under sai l, decided ro find the vetGenerations of Cape Horners meet: back row, from left: AB T he gathering broke up Iare in eran sailing-ship sailo rs, drag them Jesse Kenworthy (Picto n Castle), Capt. Daniel Moreland aboard and into the salon of the (Picton Cas tle), Capt. Paul Staples {Lawhill and Co mmo- the night-a starlit night with the Romance, and celebrate old rimes. dore II), Doris Soderlund {Lawhill), Brian Donnelly (Picto n clouds spilling overrhe top of Tab le Many hadn 't sailed together, bur Cas tle), Tony Newton (Passat), Joe Brownless {Lawhill), Mountain, vanishing as they slid they all knew each other's ships. All Rebecca Sher (Picton Castle), Dutchy van Dijl {Lawhill); down the cliffs-vanishing like the the ships were 2,000- and 3,000- bottom row, from left: Dennis Stevenson (Picton Cas tl e), Age of Sail without a bang, just go ne to n steel square riggers-powerful , Vicki Sullivan (Picton Castle), Becky Kern (Picton Cas tl e), and over qui etly. So cabs picked up graceful, seaworthy, the last great Capt. Phil Nankin {Lawhill and Passat), J immy Fewster the Cape Homers one by one, and th is yo ung 22-year-old ma re slipped fl owering of sailing-ship naval ar- {Lawhill) (Photo: Bill Wellington) into hi s bunk, another day over. Bur chitecture-cathedrals of the sea. Usually manned with boys (and som e girls), Capetonian Cape Homers didn 't come to a night ro remember. they sailed aro und Cape Horn . Repeat- parries on ships empty-handed . And so th e Picton Castle in Romance's Wake edly. Now these boys and girls were well excellent Cape Province wine came forth, and glasses fo und their way on deck and Twenty-two years later, the steel bark Picton grown and known as "Cape Horners." They came ro the Romance-some onto the freshly varnished pin rails holding Castle is alongs ide the Cape Town piers sprightly, so me a bit wobbly. As they the nearly coiled runnin g gear for the under Table Mountain. Much has changed: Mandela is our of priso n and is pres ident of stepped over the turned taffrail of the squaresails. As it grew darker and colder, we got ro South Africa; the Soviet Un io n turned Romance's poop onto her oiled pine decks, rhe years fell away. Grasping a coarse ma- know each other. We repaired below ro the insolvent. The brigantine Romance, sto utnila main brace and drawing in a heady salon of the Romance: low oak bea ms, ship hearted ship though she was, has joined the draught of Stockholm-tar-laden salt air for pictures and carvings from aro und the Lawhill and others and sails only in the the first rime in years was an elixir. You world. W e had a big pot of so mething for memo ries of those who served in her. Bur some things never seem to change. co uld see backs straighten, eyes sparkle a dinner. And then the roasts and sea sto ries bit more, and a smile spread a little wider. began. Tales of gro undings, tales of being The rounding of the Cape of Good Hope T har late afternoon on Tabl e Bay they sat caught aback, tales of miles run in the in sail is still a challenging passage. The aro und rhe main skylight on deck under- Roaring Forties, stories of stowing ply- clouds spilling over Table Mountain (cal led neath the thick foremast with its nearly wood-stiff uppertops'ls off Cape Horn in "the tablecloth") are still harbingers of an squared yards and harbor-furled fl ax sails. th e winter. No gloves. Leave bits of yo ur imminent, stiff southeast gale such as the Introductions all aro und: "This is Nankin, fingers behind. Ships lost. Ships saved. Out- Picton Castle had on ap proaching Table Mare of the Lawhill." "You know Pamela rageo us stories of idiotic runs as hore on Bay. T he seals and penguins still frolic in from the Cecilie. Meer Gunter Shul tz from liberty in Rio de Janeiro, Hamburg, Ire- the waters here and Caprai n Phil Na nkin, the Padua." Ir went on like that for a while land,Ausrralia, Tahiti . Dodging minefields forme rly of the bark Lawhi!l, does n't look