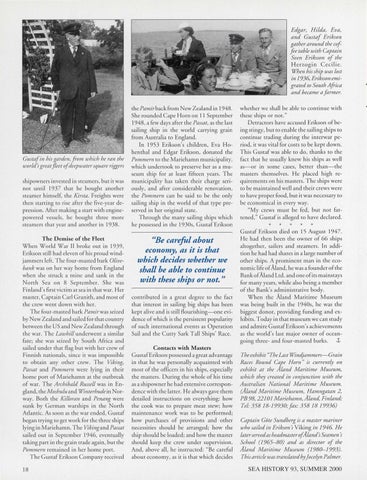 Edgar, H ilda, Eva, and Gustaf Erikson gather around the cof fie table with Captain Sven Eriksson of the Herzogin Cec ili e. When his ship was lost in 1936, Eriksson emigrated to South Africa and became a farmer.

Gustaf in his garden, from which he ran the world&#39;s greatfleet ofdeepwater square riggers shipow ners inves ted in steamers, but it was not until 1937 that he bought another steamer himself, th e Kirsta. Freights were then starting to rise after the five-year depression. After making a start with enginepowered vessels, he bought three more steamers that year and another in 1938. The Demise of the Fleet When World War II broke out in 1939, Erikson sti ll had eleven of his proud wi ndjammers left. The four-masted bark Olivebank was on her way home from England when she struck a mine and sank in the No rth Sea on 8 September. Sh e was Finland&#39;s first victim at sea in that war. Her master, Captain Carl Granith, and most of the crew went down with her. T he four-masted bark Pamirwas seized by New Zealand and sailed for that co untry between the US and New Zealand through the war. T he Lawhill underwent a similar fate; she was seized by South Africa and sailed under that flag but with her crew of Finnish nationals, since it was impossible to obtain any other crew. T he Viking, Passat and Pommern were lyin g in their home port of Mariehamn at the outbreak of war. The Archibald Russell was in England, theMoshuluand WinterhudeinNorway. Both the Killoran and Penang were sunk by German warships in the North Atlantic. As soon as the war ended, G ustaf began trying to get wo rk for the three ships lying in Mariehamn. The Vikingand Passat sailed out in September 1946, eventually taking part in the grain trade again, but the Pommern remained in her hom e port. T he G ustaf Erikson Company received

thePamirbackfrom New Zealand in 1948. She rounded Cape Horn on 11 September 1948, a few days after the Passat, as th e las t sailing ship in the world carrying grain from Australia to England. In 1953 Erikson&#39;s children, Eva Hohenthal and Edgar Erikson, donated the Pommern to the Mariehamn municipality, which undertook to preserve her as a museum ship for at least fifteen years. The municipality has taken their charge seriously, and after co nsiderable renovation, the Pommern can be said to be the only sailing ship in the world of that type preserved in her original state. Through the many sailing ships which he possessed in the 1930s, G ustaf Erikson

&#39;&#39;Be careful about economy, as it is that which decides whether we shall be able to continue with these ships or not. &quot; contributed in a great degree to th e fact that interest in sailing big ships has been kept alive and is still flouri shing-o ne evidence of which is the persistent populari ty of such intern ational events as Operation Sail and the C utty Sark Tal l Ships&#39; Race. Contacts with Masters G ustaf Erikson possessed a great advantage in that he was personally acquainted with most of the officers in his ships, especially the masters. During the who le of his time as a shipowner he had extensive co rrespondence with the latter. He always gave them detail ed instructio ns on everything: how the cook was to prepare meat stew; how maintenance work was to be performed; how purchases of provisions and other necessities sho uld be arranged; how the ship should be loaded; and how the master should keep the crew under supervision. And, above all, he instructed: &quot;Be careful about economy, as it is that which decides

whether we shall be able to continue with these ships or nor. &quot; Detractors have accused Erikson of being stingy, but to enable the sailing ships to continue trading durin g the interwar period, it was vital for costs to be kept down . This G ustaf was ab le to do, thanks to the fact that he usually knew his ships as well as-or in some cases, better than- the masters themselves. He placed hi gh requirements on his masters. The ships were to be maintained well and their crews were to have proper food, but it was necessary to be economical in every way. &quot;My crews must be fed, but not fattened,&quot; G ustaf is alleged to h ave declared .

* * * * * Gustaf Erikson died on 15 August 1947 . H e had then been the owner of 66 ships altogether, sailers and steamers. In addition he had had shares in a large number of other ships. A prominent man in the economic life ofAland, he was a founder of the Bank ofAland Ltd. and one of its mainstays for many years, while also being a member of the Bank&#39;s admini strative body. When the Aland Maritime Museum was being built in the 1940s, he was the biggest donor, prov iding funding and exhibits. Today in that museum we can study and admire G ustafErikson &#39;s achievements as the wo rld &#39;s last major owner of oceangoing three- and four-masted barks. -t. The exhibit &quot;The Last Windjammers-Grain Races Round Cape Horn&quot; is currently on exhibit at the Aland Maritime Museum, which they created in conjunction with the Australian National Maritime Museum. (Aland Maritime Museum, H amngatan 2, PB98, 22101 Mariehamn,Aland, Finland; Tel: 358 18-19930;/ax: 358 18 19936) Captain Gote Sundberg is a master mariner who sailed in Erikson&#39;s Viking in 1946 H e later served as headmaster ofAland&#39;s Seamen&#39;s School (1965-80) and as director of the Aland Maritime Museum (1980-1993). This article was translated byJocelyn Palmer. SEA HISTORY 93 , SUMMER 2000