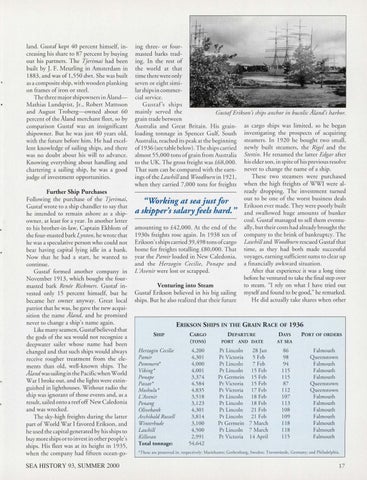 land. Gustaf kept 40 percent himself, increasing his share to 87 percent by buying our his partners. The Tjerimai had been built by J. F. Memling in Amsterdam in 1883 , and was of 1,550 dwt. She was built as a composite ship, with wooden planking on frames of iron or steel. The three major shipowners inAlandMathias Lundqvist, Jr., Robert Mattsson and August Troberg-owned about 60 percent of the Aland merchant fleet, so by comparison Gustaf was an insignifi cant shipowner. But he was just 40 years old, with the future before him . H e had excellent knowledge of sailing ships, and there was no doubt abo ut his will to advance. Knowing everything about handling and chartering a sailing ship, he was a good judge of investment opponunities.

Further Ship Purchases Following the purchase of the Tjerimai, G ustaf wro te to a ship chandler to say that he intended to remain ashore as a shipowner, at least fo r a year. In another letter to his brother-in-law, Captain Ekblom of the four-masted barklynton, he wro te that he was a speculative person who could not bear having capital lying idle in a bank. Now that he had a start, he wanted to continue. G ustaf formed another company in November 191 3, which bought the fourmasted bark Renee Rickmers. G ustaf inves ted only 15 percent himself, but he became her owner anyway. Great local patriot that he was, he gave the new acquisitio n the name Aland, and he promised never to change a ship &#39;s name agai n. Like many seamen, G ustaf believed that the gods of the sea wo uld not recognize a deepwater sailer whose name had been changed an d that such ships wo uld always receive rougher treatment from the elements than old, well-known ships. The Aland was sailing in the Pacific when Wo rld War I broke out, and the lights were extinguished in lighth ouses. W ithout radio the ship was ignorant of those events and, as a result, sailed onto a reefoff New Caledonia and was wrecked . T he sky-high freights during the latter part of Wo rld War I favored Erikson, and he used the capital generated by his ships to buy mo reships or to invest in other people&#39;s ships. His fleet was at its height in 1935, when the company had fifteen ocean-go-

ing three- or fo urmasted barks trading. In the rest of the wo rld at that time there were only seven or eight similar ships in commercial service. Gustaf&#39;s ship s mainly served the GustafErikson s ships anchor in bucolic Alands harbor. grain trade between Australia and Great Britain. His grai n- as cargo ships was limited, so he began loading tonnage in Spencer G ulf, So uth investigating the prospects of acquiring Australi a, reached its peak at the beginning steame rs. In 1920 he bought two small, of 1936 (see table below). The sh ips carried newly built steamers, the Rigel and the alm ost 55,000 tons of grain from Australia Stettin. H e renamed the latter Edgar afte r to the UK. The gross freight was £68,000 . his elder son, in sp ite of his previous resolve That sum can be compared with the earn- never to change the name of a ship . These two steamers we re purchased ings of the Lawhill and Woodburn in 192 1, the high freights of WWI were alwhen when they carried 7,000 tons for freights ready dropping. T he inves tment turned our to be one of the worst business deals &quot;Working at sea just for Erikson ever made. T hey were poorly built a skipper&#39;s salary fee/,s hard. &quot; and swallowed huge amounts of bunker coal. Gustaf managed to sell them eventuamounting to £42,000. At the end of the ally, bur their costs had already brought the 1930s freights rose again. In 1938 ten of company to the brink of bankruptcy. The Erikson&#39;s ships carried 39,498 tons of cargo Lawhill and Woodburn rescued G ustaf that home for freights totalling £80,000. That time, as they had both made successful year the Pamir loaded in New Caledonia, voyages, earning sufficient sums to clear up and the H erzogin Cecilie, Ponape and a financially awkward situation. After rhat experience it was a long time L &#39;Avenir were lost or scrapped . before he ventured to take the final step over to steam. &quot;I rely on what I have tried out Venturing into Steam Gustaf Erikson believed in his big sailing myself and fo und to be good,&quot; he remarked. He did actually take shares when other ships. Bur he also realized that their future

ERIKSON SHIPS IN THE GRAIN RACE OF SHIP