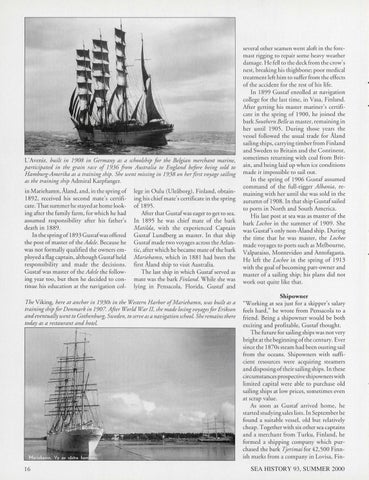 L&#39;Avenir, built in 19 08 in Germany as a schoofship for the Belgian merchant marine, participated in the grain race of 1936 from Australia to England before being sold to H amburg-Amerika as a training ship. She went missing in 1938 on her first voyage sailing as the training ship Admi ral Karpfanger. in Mariehamn, Aland, and, in the spring of 1892, received his seco nd mate&#39;s certificate. T hat summer he stayed at home looking after the family fa rm, fo r which he had ass umed responsibility after his fa ther&#39;s death in 1889. In the spring of 18 93 G ustafwas offered the post of mas ter of the Adele. Because he was not formall y qualified the owners employed a flag captain, although G ustaf held responsibility and made the decisions. G ustaf was m as ter of the Adele the fo llowing year too, but then he decided to continue his education at the navigation col-

lege in O ulu (Uleaborg), Finland, obtaining his chief mate&#39;s certificate in the spring of 1895. After that G ustaf was eager to get to sea. In 1895 he was chief mate of the bark Matilda, with the experienced Captain G ustaf Lundberg as master. In that ship G ustaf made two voyages across the Atlantic, after which he became mate of the bark Mariehamn, which in 188 1 had been the firs t Aland ship to visit Australia. T he last ship in which G ustaf served as mate was the bark Finland. W hile she was lying in Pensacola, Florida, G ustaf and

The Viking, here at anchor in 1930s in the Western Harbor ofMariehamn, was built as a training ship for D enmark in 19 07. After World War II, she made Losing voyages for Erikson and eventually went to Gothenburg, Sweden, to serve as a navigation school. She remains there today as a restaurant and hotel.

several oth er seamen we nt aloft in the foremast rigging to repair some heavy weather damage. He fell to the deck from the crow&#39;s nest, breaking his thighbone; poor m edical treatment left him to suffer from the effects of the accident fo r the rest of his life. In 1899 G ustaf enrolled at navigation college for the las t time, in Vasa, Finland. After getting his mas ter mariner&#39;s certificate in the spring of 1900, he joined the bark Southern Beffe as mas ter, remaining in her until 1905. D uring those years the vessel followed the usual trade fo r Aland sailing ships, carrying timber from Finland and Sweden to Britain and the Continent, sometimes returning with coal from Britain, and being laid up when ice conditions made it impossible to sail out. In the spring of 1906 G ustaf ass umed command of the full- rigger Albania, remaining with her until she was sold in the autumn of 1908. In that ship G ustaf sailed to ports in No rth and South America. His las t post at sea was as mas ter of the bark Lochee in the summer of 1909. She was G ustaf&#39;s only non-Aland ship . During the time that he was m as ter, the Lochee made voyages to ports such as Melbourne, Valparaiso, M ontevideo and Antofagasta. He left the Lochee in the spring of 19 13 with the goal of becoming part-owner and mas ter of a sailing ship; his plans did not wo rk out quite like that.

Shipowner &quot;W orking at sea just for a skipper&#39;s salary feels hard,&quot; he wrote from Pensacola to a fri end. Being a shipowner wo uld be both exciting and profitable, G ustaf thought. T he future for sailing ships was not very bright at the beginnin g of the century. Ever since the 1870s steam had been ousting sail from the oceans. Shipowners with sufficient reso urces were acqui ring steamers and disposing of their sailing ships. In these circumstances prospective shipowners with limited capital were able to purchase old sailing ships at low prices, sometimes even at scrap value. As soon as G ustaf arri ved home, he started studying sales lists. In September he fo und a suitable vessel, old but relatively cheap. Together with six other sea captains and a merchant from T urku, Finland, he fo rmed a shipping company which purchased the bark Tjerimai fo r 42,5 00 Finnish marks from a company in Lovisa, FinSEA HISTORY 93, SUMMER 2000