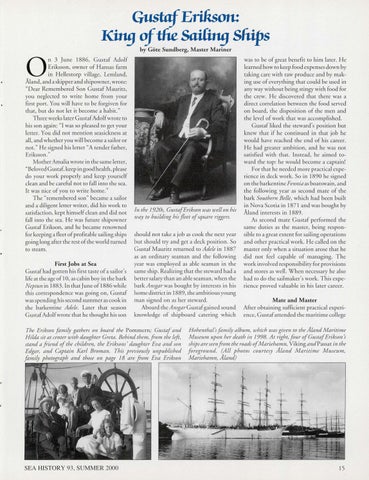 n 3 June 1886, Gustaf Adolf Eriksson, owner of Hansas farm in Hellestorp village, Lemland, Aland, and a skipper and shipowner, wrote: &quot;D ear Remembered Son Gustaf Mauritz, yo u neglected to write home from your first port. You will have to be forgiven for that, but do not let it become a habit. &quot; Three weeks later GustafAdolf wrote to his son again: &quot;I was so pleased to get your letter. You did not mention seasickness at all, and whether you will become a sailor or not. &quot; H e signed his letter &quot;A render father, Eriksson. &quot; Mother Amalia wrote in the sam e letter, &quot;Beloved Gustaf, keep in good health , please do your work properly and keep yo urself clean and be careful nor to fall into the sea. Ir was nice of you to write home.&quot; The &quot;remembered son&quot; became a sailor and a diligent letter writer, did his wo rk to satisfaction, kept himself clean and did not fall into the sea. He was future shipowner Gus taf Erikson, and he became renowned for keeping a fleer of profirable sailing ships going long after the rest of the world turned to steam.

First Jobs at Sea Gustaf had gotten his first taste of a sailor&#39;s life at the age of 10, as cabin boy in the bark Neptun in 1883. In rharJuneofl886 while this correspondence was going on, Gustaf was spending his second summer as cook in the barkenrine Adele. Later that seaso n Gustaf Adolf wrote that h e thought his so n

In the 1920s, GustafErikson was well on his way to building his fleet ofsquare riggers. should not rake a job as cook the next year but should try and get a deck position. So G ustaf Mauritz returned to Adele in 1887 as an ordinary seam an and the following year was employed as able seaman in the sam e ship. Realizing that the steward had a better salary than an able seaman, when the bark Ansgar was bo ught by interests in his home district in 1889, the ambitious young man signed on as her steward . Aboard the Ansgar G ustaf gained sound knowledge of shipboard cateri ng whi ch

The Erikson family gathers on board the Pommern; Gustaf and Hilda sit at center with daughter Greta. Behind them, from the left, stand a friend of the children, the Eriksons&#39; daughter Eva and son Edgar, and Cap tain Karl Broman. This previously unpublished family photograph and those on page 18 are from Eva Erikson

was to be of great benefir to him later. H e learned how to keep food expenses down by raking care with raw produce and by making use of everything that could be used in anyway without being stingy with food for the crew. He discovered that there was a direct correlation between the food served on board, the disposition of the m en and the level of work that was accomplished. Gusrafliked the steward&#39;s positi on but knew that if he continued in that job he would have reached the end of his career. H e had greater ambition, and he was not satisfied with that. Instead, he aimed toward the top: he wo uld become a captain! For that he needed more practical experience in deck wo rk. So in 1890 he signed o n the barkenrine Fennia as boatswain , and the following year as second mate of the bark Southern Belle, which had been built in Nova Scotia in 187 1 and was bought by Aland interests in 1889 . As seco nd m are G us taf performed the sam e duties as the master, being responsible to a great extent for sailing operations and other practical work. H e called on the m as ter only when a situati o n arose that he did no r feel capable of m anaging. T he work involved responsibili ty for provisions and sto res as well. When necessary he also had to do the sailmaker&#39;s wo rk. T his experience proved valuable in his later career.