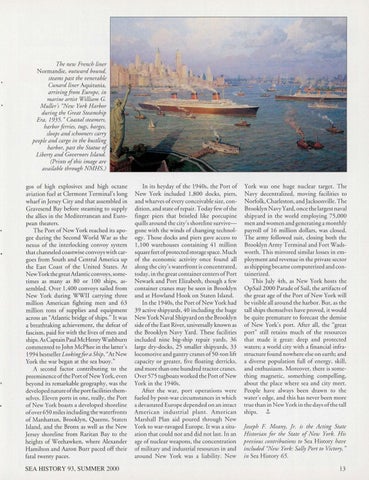 steams past the venerable Cunard Liner Aquitania, arriving from Europe, in marine artist William G. Muller&#39;s &quot;New York Harbor during the Great Steamship Era, 1935. &quot;Coastal steamers, harbor ferries, tugs, barges, sloops and schooners carry people and cargo in the bustling harbor, past the Statue of Liberty and Governors Island. (Prints of this image are available through NMHS.) gos of high explosives and high octane aviation fuel at Clermont Terminal&#39;s long wharf in Jersey City and that assembled in Gravesend Bay before steaming to supply the allies in the Mediterranean and European theaters. The Port of New York reached its apogee during the Second World War as the nexus of the interlocking convoy system that channeled coastwise convoys with cargoes from South and Central America up the East Coast of the United States. At New York the great Atlantic convoys, sometimes as many as 80 or 100 ships, assembled. Over 1,400 convoys sailed from New York during WWII carrying three million American fighting men and 63 million tons of supplies and equipment across an &quot;Atlantic bridge of ships. &quot; It was a breathtaking achievement, the defeat of fascism, paid for with the lives of men and ships. As Captain Paul McHenry Washburn commented to John McPhee in the latter&#39;s 1994 bestseller Looking/or a Ship, &quot;At New York the war began at the sea buoy.&quot; A second factor contributing to the preeminenceofthePortofNew York, even beyond its remarkable geography, was the developed nature of the port facilities themselves. Eleven ports in one, really, the Port of New York boasts a developed shoreline ofover 650 miles including the waterfronts of Manhattan, Brooklyn, Queens, Staten Island, and the Bronx as well as the New Jersey shoreline from Raritan Bay to the heights of Weehawken, where Alexander Hamilton and Aaron Burr paced off their fatal twenty paces. SEA HISTORY 93 , SUMMER 2000

In its heyday of the 1940s, the Port of York was one huge nuclear target. The New York included 1,800 docks, piers, Navy decentralized, moving facilities to and wharves of every conceivable size, con- Norfolk, Charleston, and Jacksonville. The dition, and state of repair.Today few of the Brooklyn Navy Yard, once the largest naval finger piers that bristled like porcupine shipyard in the wo rld employing 75,000 quills around the city&#39;s shoreline survive- men and women and generating a monthly gone with the winds of changing technol- payroll of 16 million dollars, was closed. ogy. Those docks and piers gave access to The army followed suit, closing both the 1, 100 warehouses containing 4 1 million Brooklyn Army Terminal and Fort Wadssquare feet of protected storage space. Much worth. This mirrored similar losses in emof the economic activity once found all ployment and revenue in the private sector along the city&#39;s waterfront is concentrated, as shipping became computerized and contoday, in the great container centers of Port tainerized. Newark and Port Elizabeth, though a few This July 4th, as New York hosts the container cranes may be seen in Brooklyn OpSail 2000 Parade of Sail, the artifacts of and at Howland Hook on Staten Island. the great age of the Port of New York will In the 1940s, the Port of New York had be visible all around the harbor. Bur, as the 39 active shipyards, 40 including the huge tall ships themselves have proved, it would New York Naval Shipyard on the Brooklyn be quite premature to forecast the demise side of the East River, universally known as of New York&#39;s port. After all, the &quot;great the Brooklyn Navy Yard. These facilities port&quot; still retains much of the resources included nine big-ship repair yards, 36 that made it great: deep and protected large dry-docks, 25 smaller shipyards, 33 waters; a world city with a financial infralocomotive and gantry cranes of50-ton lifr structure found nowhere else on earth; and capacity or greater, five floating derricks, a diverse population full of energy, skill, and more than one hundred tractor cranes. and enthusiasm. Moreover, there is someOver 5 7 5 tugboats worked the Port ofN ew thing magnetic, something compelling, about the place where sea and city meet. York in the 1940s. After the war, port operations were People have always been drawn to the fueled by post-war circumstances in which water&#39;s edge, and this has never been more a devas tated Europe depended on an intact true than in New York in the days of the tall American industrial plant. American ships. 1, Marshall Plan aid poured through New York to war-ravaged Europe. It was a situ- Joseph F Meany, Jr. is the Acting State ation that could not and did not last. In an Historian far the State of New York. His age of nuclear weapons, the concentration previous contributions to Sea History have of military and industrial resources in and included &quot;New York: Sally Port to Victory, &quot; aro und New York was a liability. New in Sea History 65. 13