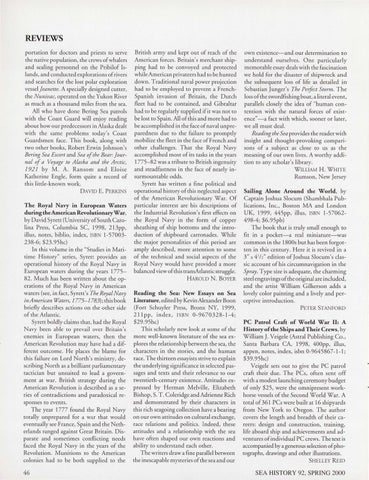 REVIEWS portation for doctors and priests to serve the native population, the crews of whalers and sealing personnel on the Pribilof Islands, and conducted explorations of rivers and searches for the lost polar exploration vessel Jeanette. A specially designed cutter, the Nunivac, operated on the Yukon River as much as a thousand miles from the sea. All who have done Bering Sea patrols with the Coast G uard will enjoy reading abo ut how our predecessors in Alaska dealt with the same problems today&#39;s Coas t G uardsmen face. This book, along with two other books, Robert Erwin Johnson&#39;s Bering Sea Escort and Sea ofthe Bear: Jour-

nal of a Voyage to Alaska and the Arctic, 1921 by M. A. Ransom and Eloise Katherine Engle, form quite a record of this little-known work. DAVID E. PERKINS

British army and kept out of reach of the American forces. Britain&#39;s merchant shipping had to be convoyed and protected while American privateers had to be hunted down. Traditional naval power projection had to be employed to prevent a FrenchSpanish invasion of Britain, the Durch fleet had to be contain ed, and Gibraltar had to be regularly supplied if it was not to be lost to Spain. All of this and more had to be accomplished in the face of naval unpreparedness due to the failure to promptly mobilize the fleet in the face of French and other challenges. That the Royal Navy accomplished most of its tasks in the years 1775-82 was a tribute to British ingenuity and steadfastness in the face of nearly insurmountable odds. Syrett has written a fine political and operational history of this neglected aspect of the American Revolutionary War. Of particular interes t are his descriptions of the Industrial Revolution&#39;s first effects on the Royal Navy in the form of copper sheathing of ship bottoms and the introduction of shipboard carronades. While the major personalities of this period are amply described, more attention to some of the technical and social aspects of the Royal Navy would have provided a more balanced view of this transAtlantic struggle. HAROLD N. BOYER Reading the Sea: New Essays on Sea Literature, edited by Kevin Alexander Boon (Fort Schuyler Press, Bronx NY, 1999, 211pp, index, ISBN 0-9670328-1-4 ; $29.9 5hc) This scholarly new look at some of the more well-known literature of the sea explores the relationship between the sea, the characters in the stories, and the human race. T he thirteen essayists strive to explain the underlying significance in selected passages and texts and their relevance to our twentieth-century existence. Attitudes expressed by H erman M elville, Elizabeth Bishop, S. T. Coleridge andAdrienne Rich and demonstrated by their characters in this rich seagoing collection have a bearing on our own attitudes on cultural exchange, race relations and politics. Indeed, these attitudes and a relationship with the sea have often shaped our own reactions and ability to understand each other. T he writers draw a fine parallel between the inescapable mys teries of the sea and our

own existence-and our determination to understand ourselves. One particularly memorable essay deals with the fascination we hold for the disaster of shipwreck and the subsequent loss of life as detailed in Sebastian J unger&#39; s The Perfect Storm. T h e loss of the swordfishing boat, a literal event, parallels closely the idea of &quot;human co ntention with the natural forces of existence&quot; -a fact with which, sooner or later, we all must deal. Reading the Sea provides the reader with insight and thought-provoking comparisons of a subject as close to us as the meaning of our own lives. A worthy addition to any scholar&#39;s library. WILLIAM H . WHITE Rumson, New Jersey Sailing Alone Around the World, by Captain Joshua Slocum (Sham bhala Publications, Inc., Boston MA and London UK, 1999, 445 pp, illus, ISBN 1-57062498-4; $6.95pb) The book that is truly small enough to fit in a pocket-a real miniature-was common in the 1800s but has been forgotten in this century. H ere it is revived in a 3&quot; x 4 1/z&quot; edition ofJoshua Slocum&#39;s classic acco unt of his circumnavigation in the Spray. Type size is adequate, the charming steel engravings of the original are included, and the artist William Gilkerson adds a lovely color painting and a lively and perceptive introduction. PETER STANFORD PC Patrol Craft of World War II: A History of the Ships and Their Crews, by William J. Veigele (Astral Publishing Co., Santa Barbara CA, 1998, 400pp, illus, appen, notes, index, isbn 0-9645867- 1-1 ; $39 .95hc) Veigele sets out to give the PC patrol craft their due. The PCs, often sent off with a modest launching ceremony budget of only $25, were the omnipresent workhorse vessels of the Second World War. A total of361 PCs were built at 16 shipyards from New York to Oregon. The author covers the length and breadth of their careers: design and construction, training, life aboard ship and achievements and adventures of individual PC crews. The text is accompanied by a generous selection of photographs, drawings and other illustrations. SHELLEY REID