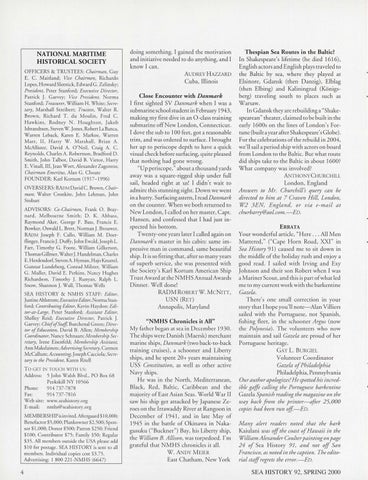 To GET IN TOUCH WITH US: Add ress:

doing something. I gained the motivation and initiative needed to do anything, and I know I can . AUDREY H AZZARD C uba, Illinois

Close Encounter with Danmark I first sighted SV Danmark when I was a submarine school student in February 1943, making my first dive in an 0-class training submarine offNew London, Connecticut. I dove the sub to 100 fee t, got a reasonable trim, and was ordered to surface. I brought her up to periscope depth to have a quick visual check before surfac ing, quite pleased that nothing had gone wrong. &quot;Up periscope,&quot; about a thousand yards away was a square-rigged ship under full sail, headed righ t at us! I didn&#39;t wait to admire this stunning sight. D own we went in a hurry. Surfacing as tern, I read Danmark on the co unter. W hen we both returned to New London, I called on her master, C apt. H ansen, and confessed that I had just inspected his bottom. Twen ry-o ne years later I called again on Danmark&#39;s master in his cabin : same impressive man in command, same beauriful ship . It is so fitting that, after so many years of superb service, she was presented with the Sociery&#39;s Ka rl Kortum American Ship T rust Award at the N MHSAnnual Awards Dinner. Well done! RAD M ROBERTW. MCNITT, USN (RET) An napolis, Maryland &quot;NMHS Chronicles it All&quot; My father began at sea in D ecember 193 0. T he ships we re Danish (Mae rsk) merchant marine ships, Danmark (two back-to-back training cruises), a schooner and Liberty ships, and he spent 20+ years maintaining USS Constitution, as well as other acti ve Navy ships. H e was in the No rth, Mediterran ea n, Black, Red, Baltic, Caribbean and the majority of East Asian Seas. World War II saw his ship get attacked by Japanese Zeroes on the Irrawaddy River at Rangoon in D ecember of 194 1, and in late May of 1945 in the battle of O kinawa in Nakagusuku (&quot;Buckner&quot;) Bay, his Li berry ship, the William B. A llison, was to rpedoed . I&#39; m grateful that NMH S chro nicles it all. W. ANDY MEIER Eas t Chatham, New Yo rk

Thespian Sea Routes in the Baltic? In Shakespeare&#39;s lifetime (he died 16 16), English actors and English plays traveled to the Baltic by sea, where they played at Elsinore, Gdansk (then Danzig), Elblag (then Elbing) and Kaliningrad (Konigsberg) traveling south to places such as Warsaw. In G dansk they are rebuilding a&quot; Shakespearean&quot; theater, claim ed to be built in the early 1600s on the lines of London&#39;s Fortune (built a year after Shakespeare&#39;s Globe) . For the celebratio ns of the rebuild in 2004, we&#39;ll sail a period ship with acto rs on board from London to the Baltic. Bur what ro ure did ships take to the Baltic in about 1600? W h at com pany was involved ? ANTHONY CHURCHILL Londo n, England Answers to Mr. Churchill&#39;s query can be directed to him at 1 Craven H ill, London, W2 3EN, England, or via e-mail at churbarry@aol. com.-ED.

ERRATA Yo ur wo nderful article, &quot;H ere ... All Men Mattered ,&quot; (&quot;Cape Horn Road, XXI&quot; in Sea H istory 9 1) caused me to sit down in the middle of the holiday rush and enj oy a good read . I sailed with Irving and Exy Johnson and their son Robert when I was a Mariner Sco ut, and this is part of what led me to my curren r work with the barkentine Gazela. T here&#39;s one small co rrection in yo ur sto ry that I hope yo u&#39;ll note-Alan Villiers sailed with the Portuguese, not Spanish, fishing fleet, in the schooner Argus (now the Polynesia) . T he volunteers who now maintain and sail Gazela are proud of her Portuguese heritage. GAY L. BURGIEL Volunteer Coordinator Gazela ofPhiladelphia Philadelphia, Pennsylvania Our author apologizes! He spotted his incredible gaffe calling the Portuguese barkentine Gazela Spanish reading the magazine on the way back from the printer-after 25, 000 copies had been run off- ED.

Many alert readers noted that the bark Kai ulani was off the coast of H awaii in the William Alexander Coulter painting on page 24 of Sea Histo ry 91, and not off San Francisco, as noted in the caption. The editorial staff regrets the error.-ED.