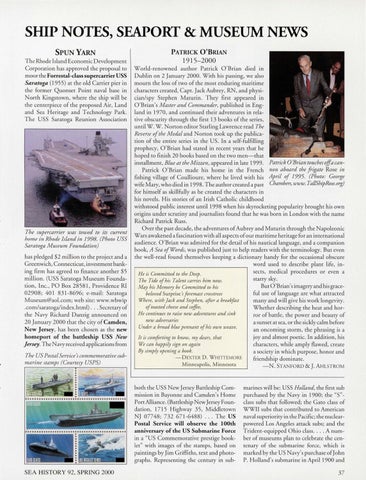 The supercarrier was to wed to its current home in Rhode Island in 19 9 8. (Photo USS Saratoga Museum Foundation)

1915-2000 Wo rld- renowned author Patri ck O &#39; Brian died in Dublin on 2 January 2000. With his passing, we also mourn the loss of two of the most enduring maritime characters created, Capt. Jack Aubrey, RN, and physician/spy Stephen Matu ri n. T hey first appeared in O &#39;Brian&#39;s M aster and Commander, published in England in 1970, and co ntinued their adventures in relative obscuriry th ro ugh the fi rs r 13 books of the series, until W . W. No rton edi tor Starling Lawrence read The Reverse of the Medal and Norton took up the publication of rhe entire series in the US. In a self-fulfilling prophecy, O &#39;Brian had stated in recent years that he hoped to finish 20 books based on the two men-that installment, B lue at the Mizzen, appeared in late 1999. Patrick 0 &#39;Brian touches ojfa canPatrick O &#39;Brian made his home in the French non aboard the frigate Rose in fishing village of Coullioure, where he lived with his April of 1995. (Photo: George wife Mary, who died in 1998. T he author created a pas t Chambers,www.Tal/ShipRose.org) fo r himself as skillfully as he created the characters in his novels. His stories of an Irish Carholic childhood withstood public interest until 1998 when his skyrocketing populariry broughr his own origins under scrutiny and journalists found that he was born in London with the name Richard Patrick Russ. Over the pas t decade, the adventures of Aubrey and Maturin through the N apoleonic Wars awakened a fascination with all aspecrs of our maritime heritage for an international audience. O &#39;Brian was admired for the detail of his nautical language, and a companion book, A Sea of Words, was published jusr to help readers with the terminology. But even rhe well-read fo und themselves keeping a dictionary handy fo r the occasional obscure wo rd used to describe plant life, insects, medical procedures or even a He is Committed to the Deep. starry sky. The Tide ofhis Talent carries him now. But O&#39; Brian&#39; s imagery and his graceMay his Memory be Committed to his ful use of language are whar attracted beloved Su rp ri se &#39;.r foremast crosstrees Where, with jack and Stephen, after a breakfast many and will give his wo rk longevity. oftoasted cheese and coffee, Whether describing the heat and horHe continues to raise new adventures and sink ro r of battle, the power and beauty of new adversaries a sunset at sea, or the sickly calm before Under a broad blue pennant of his own weave. an oncoming storm , the phrasing is a joy and almost poetic. In addition, his It is comforting to know, my dears, that We can happily sign on again characters, while amply flawed, create By simply opening a book. a society in which purpose, honor and -DEXTER D. WHITTEMORE fri ends hip dominate. M inn eapolis, M inn esota -N. STANFORD &amp; ] .AHLSTROM

both rhe USS New Jersey Battleship Commission in Bayo nne and Camden&#39;s Home Port Alliance. (Battleship New Jersey Foundarion, 1715 Highway 35, Middletown NJ 07748; 732 67 1-6488) . . . T he US Postal Service will observe the lOOth anniversary of the US Submarine Force in a &quot;US Commemorative prestige booklet&quot; with images of the stamps, based on paintings by Jim G riffiths, text and photographs. Representing the century in sub-

marines will be: USS H olland, the first sub purchased by the Navy in 1900; the &quot;S&quot;class subs that followed; the Gato class of WWII subs that co ntributed to American naval superiori ty in the Pacific; rhe nuclearpowered Los Angeles atrack subs; and the T rident-equipped Ohio class . ... A number of museums plan to celebrate the centenary of the submarine force, which is marked by the US Navy&#39;s purchase of] ohn P. H olland&#39;s submarine in April 1900 and