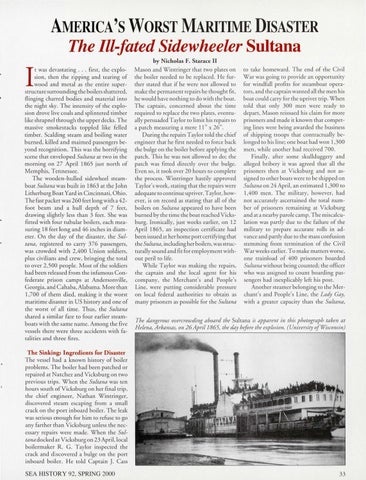 AMERICA&#39;S WORST MARITIME DISASTER The 111-fated Sidewheeler Sultana by Nicholas F. Starace II r was devas tating ... first, the explosion, then the ripping and rearing of wood and metal as the entire superstructure surrounding the boilers shattered, flinging charred bodies and material in ro the night sky. T he intens ity of rhe explosion drove live coals and splintered timber like shrapn el through the upper decks. The massive smokes tacks roppled like felled timber. Scalding steam and boiling water burned, killed and maimed passengers beyo nd recognitio n . T his was the horri fying scene that envelo ped Sultana at two in the morning on 27 April 1865 just north of Memphis, Tennessee. T he wooden-hulled sidewheel steamboat Sultana was built in 1863 at the John Lirh erburg Boar Yard in Cincinnati, Ohio. T he fast packer was 260 feet long with a 4 2foor beam and a hull depth of 7 feet, drawing slightly less than 3 feet. She was fitted with four tubular boilers, each measuring 18 feet long and 46 inches in diam eter. On the d ay of the disaster, the Sultana, registered to carry 376 passengers, was crowded with 2,400 Un ion soldiers, plus civilians and crew, bringing the total to over 2,500 people. Most of the soldiers had been released fro m rhe infamous Co nfederate prison camps at Andersonville, Georgia, and Cahaba, Alabama. More than 1,700 of them died, making it the wo rst maritime disaster in US history and one of the worst of all rime. Thus, the Sultana shared a similar fate to fo ur earlier steamboats with the sam e name. Among the five vessels there were three accidents with fatalities and three fires.

Mason and Wintringer that two plates on the boiler needed to be replaced. H e further stared that if he were nor allowed to make rhe permanent repairs he thought fir, he wo uld have nothing to do wi rh rhe boar. T he captain, concerned abo ut the rime required to replace rhe two plates, eventually persuaded Taylor to limit his repairs to a parch measuring a mere 11 &quot; x 26&quot;. D uring the repairs Taylor rold the chief engineer that he first needed to force back the bulge on the boiler before applying the parch. T his he was nor allowed to do; the parch was fitted direcrly over the bulge. Even so, it rook over 20 hours to complete rhe process. Winrringer hastily approved Taylor&#39;s work, staring that rhe repairs were adequate to continue upriver. Taylor, however, is on record as staring that all of the boilers on Sultana appeared to have been burned by rhe rime rhe boar reached Vicksburg. Ironically, just weeks earlier, on 12 April 1865, an inspection certificate had been issued at her home port certifying that the Sultana, including her boilers, was structurally so und and fir for employment without peril to life. While Taylor was making rhe repairs, the captain and rhe local agent for his company, rhe Merchant&#39;s and People&#39;s Line, were purring considerable pressure on local federal authorities to obtain as many prisoners as possibl e for the Sultana

to take homeward. T he end of the C ivil War was going ro provide an opportun ity for wi ndfall profits for steam boat operators, and the cap rain wanted all rb e men bis boar could carry for rbe upriver trip. When told rhar only 300 men were ready ro depart, Mason reissued his claim for mo re prisoners and made ir known rbar competing lines were being awarded the business of shipping troops rbar contractually belonged to his line; one boar had won 1,300 men, while another had received 700 . Finally, after so me skullduggery and alleged bribery ir was agreed that all the prisoners rhen ar Vicksburg and nor assigned to other boars were robe shipped on Sultana on 24 April, an estimated 1,300 to 1,400 men . The military, however, had nor accurately ascertained rhe ro ral number of prisoners remaining at Vicksburg and at a nearby parole camp. T he miscalculation was partly due ro the fai lure of the military to prepare accurate rolls in advance and partly due to rhe mass confusion stemming from termination of the Civil War weeks earlier. To make matters worse, one trainload of 400 prisoners boarded Sultana wirhour being counted; the officer who was assigned to count boarding passengers had inexplicably left his post. An other steamer belonging to the Merchant&#39;s and People&#39;s Line, the Lady Gay, with a greater capacity than the Sultana,

The dangerous overcrowding aboard the Sul tana is apparent in this photograph taken at H elena, Arkansas, on 26 April 1865, the day before the explosion. (University of Wisconsin)

The Sinking: Ingredients for Disaster T he vessel had a known history of boiler problems. The bo iler had been parched or repaired at Natch ez and Vicksb urg on two previous trips. When the Sultana was ten hours south ofVicksburg on her final trip, rhe chief engineer, Nathan Winrringer, discovered steam escaping from a small crack on the port inboard boiler. T he leak was serious enough for him to refuse to go any farther than Vicksburg unless the necessary repairs were made. When the Sultana docked at Vicksburg on 23 April, local boil ermaker R . G. Taylor inspected the crack and discovered a bulge on the port inboard boiler. He raid Captain J. Cass