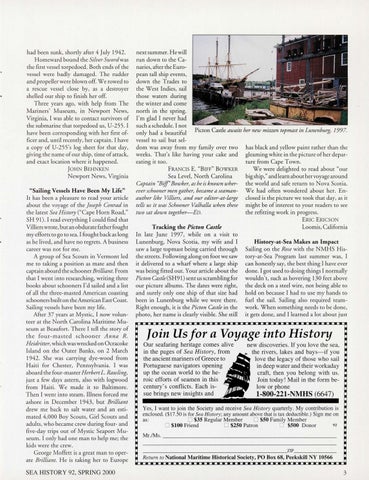 had been sunk, shortly after 4 July 1942. Homeward bound the Silver Sword was the first vessel torpedoed. Both ends of the vessel were badly damaged. T he rudder and propeller were blown off. We rowed to a rescue vessel close by, as a destroyer sh elled our ship to finish her off. Three years ago, with help from The Mariners&#39; Museum, in Newport News, Virginia, I was able to contact survivors of the submarine that torpedoed us, U-255 . I have been corresponding with her first officer and, until recently, her captain. I have a copy of U-255&#39;s log sheet for that day, giving the name of our ship, time of attack, and exact location where it happened. JOHN BEHNKEN

&quot;Sailing Vessels Have Been My Life&quot; It has been a pleasure to read your article about the voyage of the Joseph Conrad in the latest Sea History (&quot;Cape Horn Road,&quot; SH 91). I read everything I could find that Villiers wrote, but an obdurate father fought my efforts to go to sea. I fo ught back as long as he lived, and have no regrets . A business career was not for me. A group of Sea Sco uts in Vermont led me to taking a position as mate and then captain aboard the schooner Brilliant. From that I went into researching, writing three books about schooners I&#39;d sailed and a list of all the three-masted American coasting schooners built on the American East Coast. Sailing vessels have been my life. After 37 years at Mystic, I now volunteer at the North Carolina Maritime Museum at Beaufort. There I tell the story of the four-masted schoone r Anna R. H eidritter, which was wrecked on Ocracoke Island on the Outer Banks, on 2 March 1942. She was carrying dye-wood from Haiti for Chester, Pennsylvania. I was aboard the four-master Herbert L. Rawling, just a few days astern, also with logwood from Haiti. We made it to Baltimore. Then I went into steam. Illness forced me ashore in December 1943, but Brilliant drew me back to salt water and an estimated 4,000 Boy Scouts, Girl Scouts and adults, who became crew during four- and five-day trips out of Mystic Seaport Museum. I only had one man to help me; the kids were the crew. George Moffett is a great man to operate Brilliant. He is taking h er to Europe

next summer. H e will run down to the Canaries, after the European tall ship events, down the Trades to the West Indies, sail those waters during the winter and come north in the spring. I&#39;m glad I never had such a schedule. I not only had a beautiful

vessel to sail but seldom was away from my family over rwo weeks. That&#39;s like having your cake and eating it too . FRANCIS E. &quot;BIFF&quot; BOWKER

Sea Level, North Carolina Captain &quot;Bijf&#39;&#39; Bowker, as he is known wherever schooner men gather, became a seamanauthor like Villiers, and our editor-at-large tells us it was Schooner Valhalla when these two sat down together-ED.

has black and yellow paint rather than the gleaming white in the picture of her departure from Cape Town. We were delighted to read about &quot;our big ship,&quot; and learn about her voyage around the wo rld and safe return to Nova Scotia. We had often wondered about her. Enclosed is the picture we took that day, as it might be of interest to your readers to see the refitting work in progress. ERIC ERICSON

Tracking the Picton Castle In late June 1997, while on a visit to Lunenburg, Nova Scotia, my wife and I saw a large topmast being carried through the streets. Following along on foot we saw it delivered to a wharf where a large ship was being fitted out. Your article about the Picton Castle (SH9 l) sent us scrambling for our picture albums. The dates were right, and surely only one ship of that size had been in Lunenburg while we were there. Right enough, it is the Picton Castle in the photo, her name is clearly visible. She still

History-at-Sea Makes an Impact Sailing on the Rose with the NMHS History-at-Sea Program last summer was, I can honestly say, the best thing I have ever done. I got used to doing things I normally wouldn&#39;t, such as hovering 130 feet above the deck on a steel wire, not being able to hold on because I had to use my hands to furl the sail. Sailing also required teamwork. When something needs to be done, it gets done, and I learned a lot abo ut just

Join Us for a Voyage into History Our seafaring heritage comes alive in the pages of Sea History , from the ancient mariners of Greece to Portuguese navigators opening up the ocean world to the heroic efforts of seamen in this century&#39;s conflicts. Each issue brings new insights and

new discoveries. If you love the sea, the rivers, lakes and bays-if you love the legacy of those who sail in deep water and their workaday craft, then you belong with us. Join today! Mail in the form below or phone