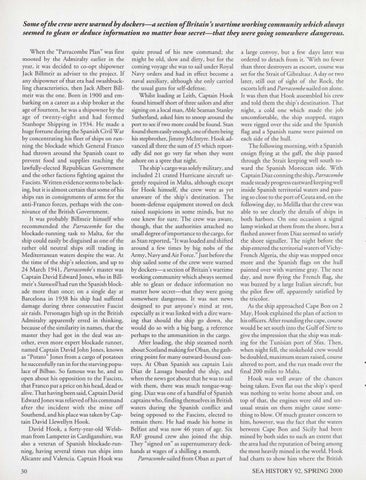 Some ofthe crew were warned by dockers-a section ofBritain&#39;s wartime working community which always seemed to glean or deduce information no matter how secret-that they were going somewhere dangerous. When the &quot;Parracombe Plan&quot; was first moored by the Admiralty earlier in the year, it was decided to co-opt shipowner Jack Billmeir as adviser to the project. If any shipowner of that era had swashbuckling characteristics, then Jack Albert Billmeir was the one. Born in 1900 and embarking on a career as a ship broker at the age of fourteen, he was a shipowner by the age of twenty-eight and had formed Stanhope Shipping in 1934. He made a huge fortune during the Spanish Civil War by concentrating his fleet of ships on running the blockade which General Franco had thrown around the Spanish coast to prevent food and supplies reaching the lawfully-elected Republican Government and the other factions fighting against the Fascists. Written evidence seems to be lacking, but it is almost certain that some of his ships ran in consignments of arms for the anti-Franco forces, perhaps with the connivance of the British Government. It was probably Billmeir himself who recommended the Parracombe for the blockade-running task to Malta, for the ship could easily be disguised as one of the rather old neutral ships still trading in Mediterranean waters despite the war. Ar the time of the ship&#39;s selection, and up to 24 March 1941 , Parracombe&#39;s master was Captain David Edward Jones, who in Billmeir&#39;s Stanwellhad run the Spanish blockade more than once; on a single day at Barcelona in 1938 his ship had suffered damage during three consecutive Fascist air raids. Personages high up in the British Admiralty apparently erred in thinking, because of the similarity in names, that the master they had got in the deal was another, even more expert blockade runner, named Captain D avid John Jones, known as &quot;Potato&quot; Jones from a cargo of potatoes he successfully ran in for the starving populace of Bilbao. So famous was he, and so open about his opposition to the Fascists, that Franco put a price on his head, dead or alive. That having been said, Captain David Edward Jones was relieved of his command after the incident with the mine off Southend, and his place was taken by Captain David Llewellyn Hook. David Hook, a forty-year-old Welshman from Lampeter in Cardiganshire, was also a veteran of Spanish blockade-running, having several rimes run ships into Alicante and Valencia. Captain Hook was

quite proud of his new command; she might be old, slow and dirty, but for the coming voyage she was to sail under Royal Navy orders and had in effect become a naval auxiliary, although she only carried the usual guns for self-defense. Whilst loading at Leith, Captain Hook found himself short of three sailors and after signing on a local man, Able Seaman Stanley Sutherland, asked him to snoop around the port to see if two more could be found. Stan found them easily enough, one of them being his stepbrother, Jimmy Mcintyre. Hook advanced all three the sum of ÂŁ5 which reportedly did not go very far when they went ashore on a spree that night. The ship&#39;s cargo was solely military, and included 21 crated Hurricane aircraft urgently required in Malta, although except for Hook himself, the crew were as yet unaware of the ship&#39;s destination. The boom-defense equipment stowed on deck raised suspicions in some minds, bur no one knew for sure. The crew was aware, though, that the authorities attached no small degree ofimportance to the cargo, for as Stan reported, &quot;It was loaded and shifted around a few times by big nobs of the Army, Navy and Air Force.&quot; Just before the ship sailed some of the crew were warned by dockers-a section ofBritain&#39;s wartime working community which always seemed able to glean or deduce information no matter how secret-that they were going somewhere dangerous. It was not news designed to put anyone&#39;s mind at rest, especially as it was linked with a dire warning that should the ship go down, she would do so with a big bang, a reference perhaps to the ammunition in the cargo. After loading, the ship steamed north about Scotland making for Ohan, the gathering point for many outward-bound convoys. At Ohan Spanish sea captain Luis Diaz de Lassaga boarded the ship, and when the news got about that he was to sail with them, there was much tongue-wagging. Diaz was one of a handful of Spanish captains who, finding themselves in British waters during the Spanish conflict and being opposed to the Fascists, elected to remain there. He had made his home in Belfast and was now 46 years of age. Six RAF ground crew also joined the ship. They &quot;signed on&quot; as supernumerary deckhands at wages of a shilling a month. Parracombe sailed from Obarr as part of

a large convoy, but a few days later was ordered to detach from it. &#39;With no fewer than three destroyers as esc&lt;0rt, course was set for the Strait of Gibralra1r. A day or two later, still out of sight of the Rock, the escorts left and Parracombe s.sailed on alone. It was then that Hook assermbled his crew and told them the ship&#39;s de~stination . That night, a cold one which made the job uncomfortable, the ship stopped, stages were rigged over the side and the Spanish flag and a Spanish name were painted on each side of the hull. The following morning, with a Spanish ensign flying at the gaff, the ship passed through the Strait keeping well south toward the Spanish Moroccan side. With Captain Diaz conning the ship, Parracombe made steady progress eastward keeping well inside Spanish territorial waters and passing so close to the port ofCeuta and, on the following day, to Melilla that the crew was able to see clearly the details of ships in both harbors. On one occasion a signal lamp winked at them from the shore, but a flashed answer from Diaz seemed to satisfy the shore signaller. The night before the ship entered the territorial waters ofVichyFrench Algeria, the ship was stopped once more and the Spanish flags on the hull pai nted over with wartime gray. The next day, and now flying the French flag, she was buzzed by a large Italian aircraft, but the pilot flew off, apparently satisfied by the tricolor. As the ship approached Cape Bon on 2 May, Hook explained the plan of action to his officers. After rounding the cape, course wo uld be set south into the Gulf ofSirte to give the impression that the ship was making for the Tunisian port of Sfax. Then, when night fell, the stokehold crew would be doubled, maximum steam raised, course altered to port, and the run made over the final 200 miles to Malta. Hook was well aware of the chances being taken. Even flat out the ship&#39;s speed was nothing to write home about and, on top of that, the engines were old and unusual strain on them might cause something to blow. Of much greater concern to him, however, was the fact that the waters between Cape Bon and Sicily had been mined by both sides to such an extent that the area had the reputation of being among the most heavily mined in the world. Hook had charts to show him where the British